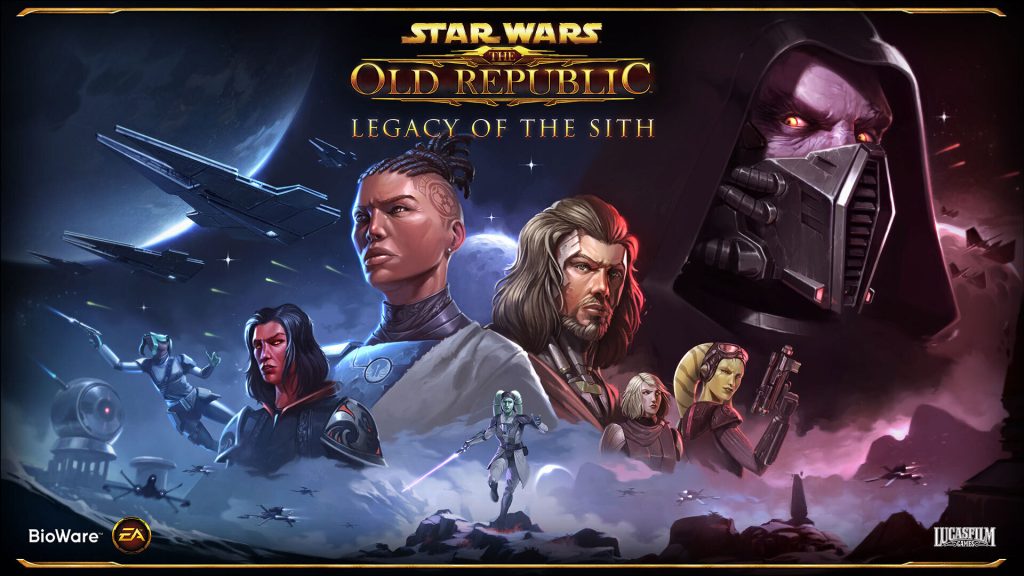 Star Wars: The Old Republic is an MMO that began in late 2011 and has been receiving ongoing support and updates over the past decade. It, like many other MMOs, utilises free-to-play gameplay with a subscription service to unlock the latest expansions and many other features.

It is a spiritual successor to the hugely popular ‘Knights of The Old Republic’ games, set 300 years after them – thus being a couple thousand years before any of the Star Wars movies. The main story follows the troubled peace agreement between the Galactic Republic and the recently revived Sith Empire, where small conflicts across the galaxy are escalating into a full-blown war. The numerous classes follow certain points of interest that contribute to the war, and you are able to make light or dark choices that can affect events throughout the rest of the story.

Having played the game on-and-off for the past 6 years, I can say that it is a fantastic story-based game, especially for Star Wars fans. The sheer amount you can play without spending any money is astoundingly large, with 8 whole classes and individual stories to go through, each roughly being 20-30 hours long for their base story. With 2 advanced classes for each of these classes, and 3 ‘disciplines’ per advanced class, the customisation to each individual character is incredible. There’s a story for every kind of Star Wars fan, a traditional Jedi hero story, a troublesome, charming smuggler, a secretive agent of the Empire, or even a Sith’s journey for unlimited power.

They were renowned for their flashy, beautifully animated cinematics promoting the game and later expansions, all of which were widely approved by players for the new worlds, stories and characters introduced. However, in recent years, updates began to decline in quality and quantity. Releases were few and far between, and when something new arrived, it was perhaps a few hours of story content and some slight changes to combat – most of which unasked for. These all culminated in 7.0 – Legacy of the Sith.

It was hyped up as the big 10–year anniversary event, with huge changes to character customisation coming. Rather than being limited to two advanced classes, players would pick an origin story and then any of the classes. A Jedi Knight could now use the powers of a Sith Assassin, A Republic Trooper could now use the weapons and tools previously exclusive to an Imperial Sniper; everyone was free to customise their character exactly how they wanted. Players can even adopt a second combat style, and freely switch between the two whenever they want. Except, there were changes that seemed a little odd. A lot of key abilities were now removed by default, and instead had to be chosen from a selection of 3 abilities – in several cases, players had to now choose from 3 very useful abilities that they had already had access to before the update.

This restricted the usefulness of many classes, especially for higher difficulty content such as operations (SWTOR’s equivalent of raids). Understandably, this upset a lot of players, as rather than expanding customisation, each class now felt about half as good as they used to be. This wasn’t unexpected either – in several public test servers prior to the update, hundreds of players had given feedback on how bad this new system was, stating it would kill a lot of hype for the new content. BioWare did not listen, and here we are now.

That was just the combat side. Players were also promised more content following the returned antagonist Darth Malgus, who was revived from his supposed death and had broken free from the Sith Empire’s control. His journey throughout the galaxy had been a mystery since then, and it has been explained that he was hunting for ancient artefacts – none of which the player has knowledge of so far. Your character’s spies tell you that Malgus has been looking for something pertaining to an ancient Sith on a forgotten planet, Elom. Before you can travel there however, there is a matter to settle on the planet Manaan, where the Republic and Empire are fighting for access to the resource ‘kolto’ – a healing substance that would greatly benefit either side’s war efforts. The player must go and assist whichever side they are aligned with and turn the tide in their favour – for roughly an hour.

Manaan is one of my favourite planets in the game, I find water planets fascinating – much like Kamino in the movies. When I heard we’d be revisiting Manaan in this expansion I was pretty excited, and sadly it was nothing special. Having played it with my Sith aligned with the Empire, it consisted of walking from point A to B and fighting the same small groups of 4 or 5 enemies every 30 seconds. Cue some boring/annoying characters, the option to kill them, and before you know it you’ve finished the story. Not to mention, much of it is bugged and doesn’t put you in the right areas after a cutscene, needing you to leave the area and re–enter to progress. I had to do this approximately 5 times throughout the story, not a great sign when it’s only an hour long. “Okay. Not great, let’s see what the next part is like.”

Cut to Elom, which takes place in a ‘flashpoint’, the game’s story-based dungeons for 1-4 players. The new planet looks great, a snowy wasteland with vibrant red flora, and menacing creatures stalking your every move. This wonder for the environment is short-lived, as it is also filled with bugs. Apparently, the devs had forgotten to properly build a floor that cannot be fallen through – a devastating issue when there are two bosses that can knock you back or pull you in, leading to you falling through the terrain and dying instantly. This happened twice for me with the first boss – which is the largest of the aforementioned predators. It wasn’t too much of an issue due to the ease of the fight, but not a great start to the flashpoint. The second boss was no issue in terms of bugs, but was instead, completely boring. You essentially fight a door that won’t shut up for the whole fight, dodging lasers and destroying droids to make the door vulnerable. We’re two for two on disappointing bosses, let’s see if it gets any better. The secret boss was interesting, three bosses that can hurt another in particular – effectively making it rock, paper, scissors.

But alas, onto the final confrontation with Malgus, again. This is the worst instance of falling through the floor, as he can and will pull you into the ground at any point in the fight and force you to restart the battle. Besides his constant abuse of your character, and your actual patience and temper, the boss is awful. One of his attack sequences is dashing around the arena for what feels like a full minute – during which he is too fast to be hit by melee attacks and will shove you into the barrier around the arena, which will probably outright kill you. If you somehow survive long enough without being forcibly buried by him, your companions, who should also be healing you and dealing damage themselves, will often forget that they are there, and simply stand still or otherwise disappear. In case it isn’t clear, this boss fight is miserable, insufferable, and utterly soul-destroying. I couldn’t bring myself to keep trying to finish it, after 8 failed attempts, I gave up and went and played Lost Ark instead.

Speaking of, who decided to delay this update to the same week as one of the biggest MMO drops of all time? BioWare, what happened there?

I can only hope that most of this update is rectified, because as much as I love this game, it was hard to even call this an expansion – 2 hours of bad, bugged content, awful combat changes, and a lot of confusing new UI.