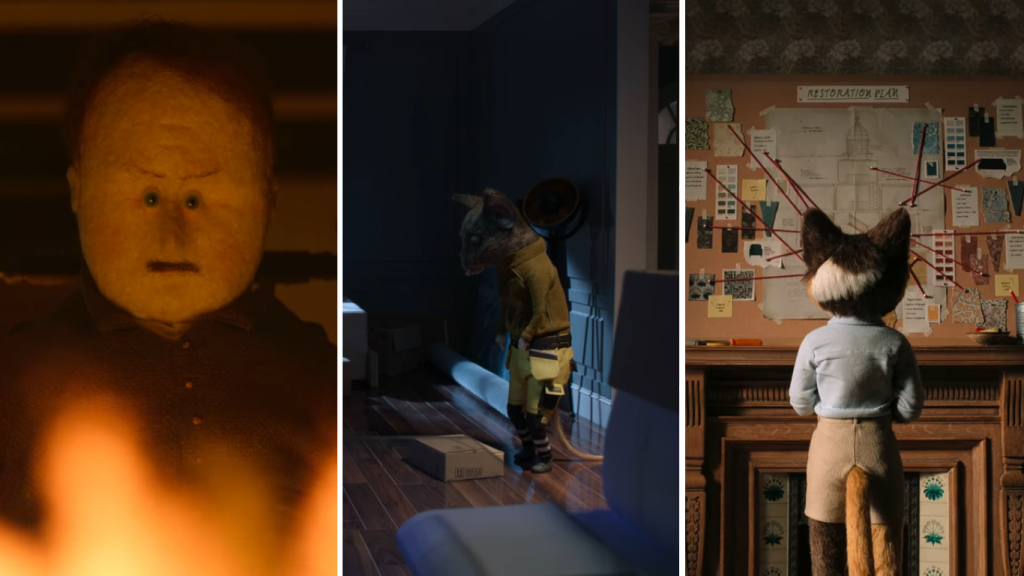 It’s hard to know what The House is about. On the surface, it’s three separate stories set across time in the same house. That’s an important fact for trying to unpick the Netflix animated dark comedy film, but there are stylistic and contextual clues that make it harder to wrap your head around. The first story features human characters and dark magical elements. The second revolves around an anthropomorphic rodent – and the finale is about a cast of talking cats. It’s unclear whether these stories take place in the same world but, regardless, it’s the house at the centre of it.

The first story centres around Mabel, the young daughter of Penny and Raymond, who comes from a once-wealthy family. Their small cottage is destroyed after Ray strikes a deal with the mysterious Mr. Van Schoonbeek, an architect who builds them a large house free of charge. Taking place in a Victorian-esque time period, this piece of the anthology takes from the Gothic tradition. Their new house is huge, dark, designed and built to be confusing. The building work continues despite them now living inside – it feels unfinished and empty, despite the grand rooms and ornate fixtures.

Raymond and Penny become enraptured by the house, entering a trance-like state at the scale of their new home. Penny spends her time sewing curtains as Raymond loses himself sat by the fireplace. The pair eventually morph into furniture – Ray into a chair, and Penny into the set of curtains she lovingly spent so much time on. Van Schoonbeek hangs over this all, his gleeful giggle echoing through the empty corridors.

Like I said, it’s hard to wrap your head around. This is the only part to feature humans, and while the animation style lends itself more to non-human figures, the doll-like faces and bodies add to the tone. Their faces are crafted from a soft material, and whenever they move, the fibres of their ‘skin’ shifts and ripples disconcertingly. The people feel unnatural. They feel out of place. The story functions well enough on its own – they all do, in fact – but in order to understand this first part, it needs to be taken as part of a whole. Three separate vignettes, the only common characteristic of which being the setting. It’s important to view these stories from the point of view of the House. Coming from a world where sinister architects build mansions to entrap the poor and the desperate, the House stands through time, welcoming new faces, new lives, new worries.

The second story features Jarvis Cocker as a property developer. He’s in the midst of flipping the House, which now sits on a city street where the bins don’t get collected, and business loans cripple people in the midst of an economic recession. Set in a time reminiscent of the modern-ish day, Cocker plays an earpiece-wielding anthropomorphic rat who struggles against an infestation of bugs. After an open house, a strange couple claim interest in buying the House, but their wild and filthy ways are at odds with the Developer’s aspiring business-minded nature.

The Developer hallucinates the insects dancing, performing strange music. After the strange couple invites their equally-strange relatives in, the Developer succumbs to their ways. Just as the bugs take on human qualities, he lets go of them. He loses his humanity, his language and his economic worries, and regresses back to the lifestyle of a rat. The House becomes wrecked as the rodents make it their nest. From magical architects to the loss of anthropomorphic intelligence, the House sees it all.

The third part follows the House’s new owner, Rosa – a cat – as she single-mindedly tries to fix her home up. A landlord with only two tenants, both of whom don’t pay rent. She can’t buy the supplies to see her dream come to a reality. But there’s another crux – the city (perhaps the world) is flooded, and the House stands alone in slowly rising waters. It crops out of the ocean alone, and there’s nothing else in sight but the tops of submerged buildings. The link between this fictional flood and the realities of coming sea-level rise can’t be ignored; in fact, that link is where The House starts to make sense as a whole.

Come floods, or the loss of civilisation, buildings remain. On every landmass, ruins of ancient societies stand as testaments to the past. The ‘point’ of Stonehenge will probably remain a mystery, but it is able to tell us about the humans of the past. The ruins of Roman, or pre-colonial American, cities say that people were there once. They made their homes at a particular point. This was a place people cared about once, a place where people lived. As these people die and their ways of life disappear or change, the ruins left behind keep part of their histories alive. Victorian houses, such as the House, stand in almost every city in the UK. They change owners or functions altogether, but their outsides stay unchanged. Ornate, terraced faces from a time gone by. These houses survived the Blitz and the rise of the internet. Different people, living different lives in different worlds, will exist inside them.

The only link between the three stories is the House – because houses contain multitudes across their lifetimes. Bad things have happened inside of the House, dreams and lives crushed, but it isn’t cursed, despite its origins. The ending feels so distant from the beginning – it’s easy to argue that they take place in completely separate realities. The three protagonists, Mabel, the Developer, and the landlady Rosa, each dream of having stability. They dream of a home. The Gothic realm of Mabel differs from the silent apocalypse in which Rosa lives. The world has changed, but they are all people hoping that the House could be the same thing for them.

The final story, despite the emptiness and mystery of the world it takes place in, doesn’t end with the House tumbling down. If the House is representative of history, then history doesn’t end. The House is retrofitted into a boat. It sails away from where it was built. It, much like history, continues.

The House is available for streaming on Netflix.