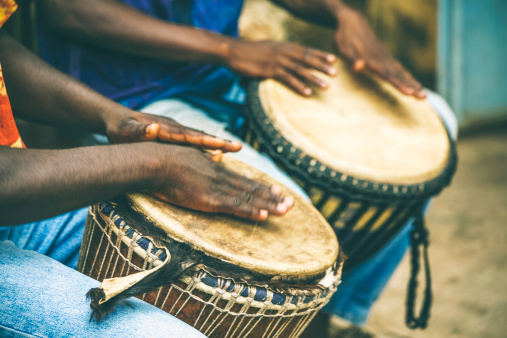 Music is a powerful creation, unique to humans (and birds!) from the wealthiest and most technologically advanced civilizations to the most primitive tribes. Humans have always found a way to spark joy through art.

Music is certainly celebrated globally, and we have found a way to apply its rhythmic patterns for pragmatic purposes.

This is definitely true of West Africa. Their music benefits many functions in society and has always been a crucial part of life. It communicates values, ideas, and emotions. For example, their music is played at weddings, funerals, during battle, and even played during ceremonies honouring their ancestors. Even today in Nigeria, mothers who birth twins have their own unique songs.

West Africa is considered one of the most musically abundant areas in the world. It contains countries such as Ghana, Nigeria, Mali, Senegal, and Guinea, which are all musically inclined.

This was once home to various empires that cultivated a lot of money from trans-Saharan trade, but now is home to the majority of the most refined classical and court music traditions.

For thousands of years within West Africa, professional musicians galled griots, similar to the European bard, played an essential role in the kingdoms that were created in the Saharan region of West Africa. They traditionally told stories of historical narratives and praised songs from their origins. In addition to being the primary storytellers of their people, griots also acted as advisers and diplomats. However, over the years their diplomatic involvement has decreased, and their main occupation is entertainment.

They often played instruments such as:

The kora is a long-necked harp lute of the Malinke people of West Africa. The instrument consists of a long hardwood neck that goes through a bottle gourd body, covered in leather. Twenty-one nylon or leather strings are attached to the end of the neck with leather tuning rings. They pass over a notched bridge (10 strings on one side, 11 on the other) and are tied to the bottom of the neck with a metal ring. It is commonly played by male musicians: often accompanied by narrations, recitations, and songs commissioned by patrons.

The talking drum is an hourglass-shaped drum from West Africa, similar to those found in Asia. The pitch of the drum can be manipulated to mimic the tone of human speech. It is a two-headed drum, and the heads are attached to each other by leather tension chords. The drum hangs over the left shoulder so it lies horizontally under the left arm, which allows you to tune the pitch by squeezing the tension chords with your arm.

The djembe’s unique and distinctive design plays a fundamental role in its flexible sound. The goblet-shaped body is carved and hollowed out from a single piece of a tree trunk. The head of the drum is traditionally made from shaved goats skin attached by a steel hoop, placed over the lip of the drum. The upper, bowl-shaped chamber in the body creates low resonance for bass strokes, whilst the narrow and longer lower section projects the volume of all the tones the djembe creates.

These instruments were not strictly played by griots and many other instruments are used by musicians in West Africa such as the ngoni, goje, Xalam, balafon and more!

There are many different styles of music that originated from West Africa that influenced American and European music that include:

Calypso is a subgenre of Afro-Caribbean music that originated in Trinidad and Tobago, later spreading throughout the West Indies. This is directly inspired by West African Kaiso music. Recognisable by its upbeat, call-and-response vocals and syncopated 2/4 beat, known as the calypso rhythm. It first emerged within the communities of African slaves, and over the years, calypso has evolved with French, Spanish, English, and African influences.

Highlife is a type of popular West African music and dance, originally from Ghana in the 19th century. Now it is celebrated in both Nigeria and Ghana since the 1950s. This style of music includes many instruments and is played by big bands; when the Gold Coast was established, European missionaries and merchants bought instruments such as accordions, guitars, harmonicas, and brass. The sound of these instruments, combined with the traditional drum-orientated music of West Africa, created the upbeat and joyful fusion that is Highlife.

Afrobeat involves the combination of West African musical styles, such as highlife and fuji music, with American Jazz, Soul and Funk. It focuses on chanted vocals, complex polyrhythms, and percussion.

West Africa is bountiful with cultures and styles, and because of this, it is impossible to make generalisations about their music. However, what we do know is ever since the Atlantic slave trade, West African music has been in a state of constant adaptation through both indigenous evolvement and external influences.

Before the arrival of Europeans, West Africa was ruled by a series of empires that had their own unique styles and instrumentation. Even the Islamic tribes in West Africa created music influenced by their northern Arab and Berber neighbours across the Sahara.

Without indigenous African music, some of our favourite styles would not exist today. Jazz, blues, ska, gospel, etc. are all musical genres that originated within America through African slaves. Although these genres still differ greatly from traditional West African folk music, the purpose of it still remains: to get you dancing.

Many cultures view dance and music as separate entities, however, in West Africa they are one and the same – no wonder the majority of genres we hear make us want to dance, it’s intentional!

How to Create Your Own Music Inspired by West African Music

Creating West African music is not an easy task as there are so many genres that include different instrumentation and styles. The vast and complex musical history in West Africa created a fusion of delightful and joyous music with perplexing rhythms that will have you on your feet, dancing for hours.

Instead of focusing on one particular genre from West Africa, we are going to focus on creating a track that is more generalised using these tips!

It’s pretty easy to find VSTs sampling West African instruments if you’re composing digitally, that is. Unfortunately, finding traditional instruments such as the kora, gonje or balafon can be particularly hard or expensive! However, djembe’s are easy to find and often affordable.

You’ll want to use a variety of instruments, including the kora, balafon, percussion, a fiddle or viola (if you do not have access to a gonje), wooden flute (ney or tambin flute, if you have that option) and most importantly, drums.

I use Logic Pro X when composing, and you can choose a variety of instrument VSTs to use from their free music library. I pay monthly for Composer Cloud’s EastWest libraries, in which I have access to a variety of West African instruments. So if you have a bit of spare money, it’s definitely worth the investment!

If not, you can search through Logic Pro X’s music library, navigate through the world tab, click on percussion which gives you a free African drum kit and kalimba (although this instrument originates from South Africa) to use. Most other DAWs will also have a free music library like this for you to browse.

This is probably the most important step to composing West African music as polyrhythmic drums and percussion is in pretty much every genre and culture of West Africa.

For something to be considered a polyrhythm, you need two or more rhythms played simultaneously at the same tempo. Essentially, you’ll have two or three (maybe more) drum/percussion patterns playing at the same time, without it sounding too chaotic. It doesn’t matter if some beats overlap, good luck!

Including vocals are also a pretty important step in creating West African music as in a lot of cultures, especially the Islamic civilization of West Africa, singing is what connects them closer to their God.

Commonly, you can find free choir VSTs to use via the libraries I previously mentioned, or you can record vocals yourself. Remember to sing in unison or octaves apart. However, if you want to make your music more cinematic, definitely include some harmonies as this will not be a detriment to the music you’re creating.

Via the tracks I have listened to, I have noticed that vibrato is not commonly used in West African music, so try to avoid using vibrato if you can.

Call-and-response is also a technique widely used within West Africa. Try and utilise this technique throughout your track, although it is not essential.

Traditionally, the music of West Africa is written in pentatonic scales or hexatonic scales (6 note scales), although the typical 7-note scale is also found in abundance. This means, luckily, you can use any scale you want, though I would recommend sticking to pentatonics. Scales are often practised descending in African music, from top to bottom.

Again, you can use pretty much any time signature you want. Both simple and compound rhythmic structures are found in West African music. You may even want to apply both signatures when writing your polyrhythms.

I have created my own West African track, which you can listen to here!