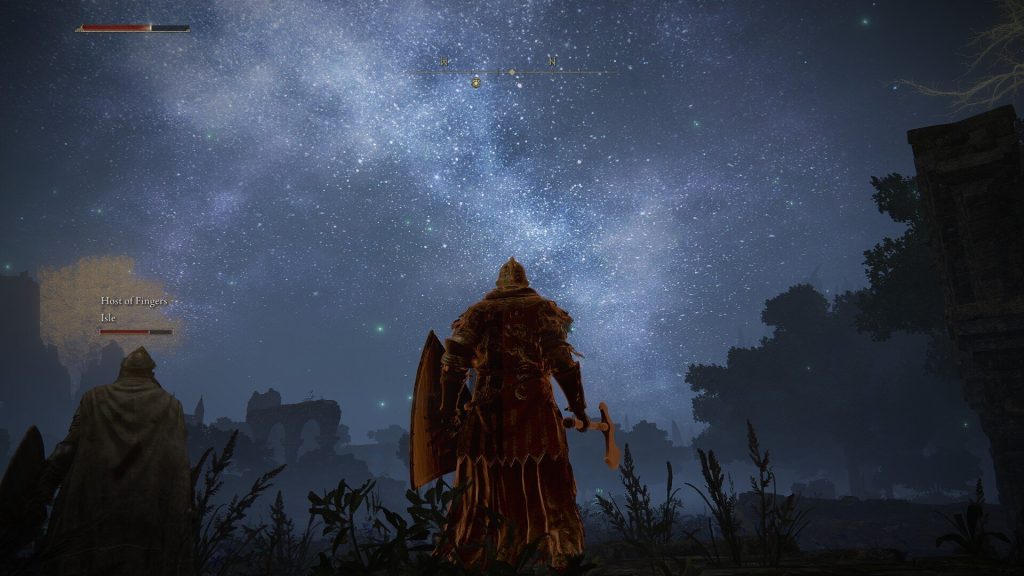 Minor Spoilers Ahead: Up to the end of Stormveil Castle

It’s finally here. The long-awaited, critically acclaimed masterpiece from Hidetaka Miyazaki and George R.R. Martin. Elden Ring arrived worldwide on the 25th of February, and the hype hasn’t slowed down since. Within 24 hours of the game launching, I had 13 hours played already. I hadn’t been so excited for a game in a long time, and it’s the first time in a while that I haven’t been somewhat disappointed by a game’s release.

One of the most attractive features was the so-called expanded co-op, allowing much more freedom and ease in playing with friends as compared to the predecessor Souls series. Given that these games are always more fun having another person by your side in the epic battles, I wanted to dive in with a buddy and see how the co-op held up. So, without further ado, let’s get into the Lands Between.

First off, this game is gorgeous. Any given moment has a breath–taking environment, and no two places feel identical. The sheer expanse of the world is incredible, the map is massive and yet nothing feels empty or meaningless. Gliding across plains, trudging through swamps, traversing mountainsides on your spectral steed, Torrent, feels wonderful. You’re never forced into an encounter you can’t escape from with the agility of your horse, or you can face the enemies head on in mounted combat. Speaking of combat, on ground combat looks and feels remarkably similar to Dark Souls 3, yet with many expanded features, such as the Ashes of War, allowing customisable skills for each weapon you carry.

Each starting class is completely unique to themselves, offering a wide variety of stats and weapons. I went with the Hero class, armed with light armour but a powerful axe, while my friend chose the standard Vagabond, equipped with heavy armour, a longsword and halberd. Getting used to the gameplay took a while, at first both of us weren’t very sure on how much we liked the game. As we began to explore together, however, the true wonders of Elden Ring showed themselves.

I’ll have to mention that while in co-op, neither player can use their horse, making travel a little slower. Enemies have increased health depending on if there are 2 or 3 players in a single world, making some encounters more challenging due to the increased length of the fight.

The summoning process is simple, one person is the host, the other is the summoned help. Whoever wishes to be summoned will have half their total healing items and cannot pick up items other than materials scattered around the world. The summoned player uses an unlimited item to write a sign on the ground, while the host uses a finite item to be able to summon players. The item can be crafted by collecting two flowers that are overabundant across the world, making it very easy to have more than enough of the item to last for hours of co-op gametime.

By summoning a friend, you open yourself to another risk – invaders- other players that come to your world with the task of defeating the host to succeed in their mission, but who must also deal with any help the host has summoned. As per usual in these games, there’s noticeable lag from invaders that cause the PvP element to be not quite up to standards, and invaders are typically much more skilled players (in comparison to myself and my friend), causing this to be a frustrating experience most times.

The co-op feature is best used in small dungeon areas, of which there are aplenty sprawled around the world. In these, you progress through the dungeon, defeating enemies and exploring together, opening shortcuts should you need to restart from your site of grace (checkpoints), to then find the boss at the end.

A summoned player has completed their mission once the boss is dead, and they are given an item as a reward, as well as a share of the runes (currency and experience points). Having completed it once, you can then do the same by switching who hosts, allowing for increased rewards for both players. While this may be repetitive for some, I found it just as fun as the first time; honing your combat skills is a huge part of this game, and there’s always room for improvement.

It isn’t just the dungeons where co-op excels. Despite the lack of faster traversal in the open world, it still feels unlike any game I’ve played before. By travelling on foot, you appreciate every encounter, every sight you see. “What the hell is that over there?” “No idea, let’s go check it out/kill it/die miserably.” Especially when both of you can acknowledge that every corner of this world was lovingly made, every area has a story behind it, every enemy has a reason to be there; the whole world really comes alive as you adventure through it.

We found ourselves going anywhere but the main path, and often were rewarded for exploring. The world itself feels like it actively encourages you to go elsewhere, if a main boss or area is too difficult, it’s like a big glaring sign that yells at you to go explore and come back stronger.

Boss fights in co-op are strange. In some cases, they feel easier, since the boss will go after someone else, allowing extra hits in the back while the targeted player blocks or dodges through their attacks. In other cases, the increased health they get really draws out the fight, and I would often fight a boss alone just to make their health manageable. It’s worth noting that on some of the more fragile bosses, it is entirely possible for two or three players to keep them staggered with constant heavy attacks, preventing them from doing even a single attack. This does trivialise many dungeon bosses, but they also aren’t always that difficult anyway.

Another part that I do consider co-op despite not following the ‘agreed laws’ of genre naming, is exploring the world on our own in our own time, and then showing each other what we found. I would wander off in a different direction and find all kinds of new things, my friend would do the same, later I’d guide him around this new area and explore it properly, and vice versa. You feel like you’re steadily uncovering more and more of this continent, and it feels satisfying learning every road and path open to you.

Whether you’re adventuring through the Lands Between alone or with friends, it is sure to be an unforgettable experience. With dozens of hours already put into the game, I feel I’ve only barely scratched the surface of Elden Ring, and I greatly look forward to what else I can discover.