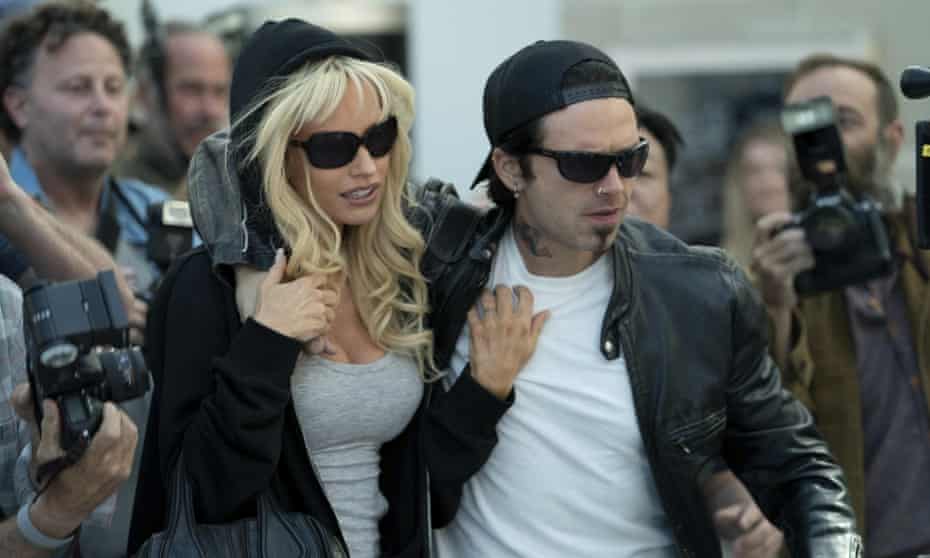 The recent Hulu series Pam & Tommy has been inescapable. From a blitz of a marketing campaign and publications, including this one, adding their two cents, you’d be a hermit not to have heard of it. The eight part series which explores the ‘true’ story of glam actress Pamela Anderson and her, then, husband Tommy Lee’s exposed sex tape is yet another striking example of a tabloid biopic. With Anderson outright dismissing the series and Lee remaining publicly silent, it’s worth considering what are the implications of telling a person’s story that they do not wish to be told? How do these biopics not only achieve in entertaining us, but equally work in building the myth surrounding their subjects to a glorifying or detrimental effect.

Pam & Tommy attempts to give Pamela Anderson the fair depiction the tabloid press never did. Anderson is shown to be strong willed, determined and fiercely independent, far flung from the ditzy sex symbol she’s often regarded. Yet despite the series’ attempts to create a more nuanced and progressive representation, Anderson has vehemently denounced her story being made. While Pam & Tommy remains an entertaining, sometimes shocking romp, it almost operates as the same embarrassing exposure to the sex tape itself. In trying to ‘realify’ the tabloid stories, the series also dregs them back up to the disadvantage of its subject. This isn’t the first instance of a dramatised tabloid story upsetting its inspiration, a similar instance happened with 2016 series American Crime Story: The People vs. OJ Simpson, it doesn’t take much to imagine why. It is a difficult line to tread when your life is in the public eye, there inevitably comes the discussion around ‘public interest’ and ‘interest of the public’ but rather than giving a true account of the story, biopics often entrench a societal myth that their subject would much rather avoid.

These attempts to paint the beautiful and the damned in society’s image is a double edged sword. While some figures detest their depictions, others gain a second uplift of fame and the benefits that come with it. While Pamela Anderson suffers from trying to shake off a public perception of her, her ex-husband may well be reaping the reward of his. It seems rather suspect that after announcing the reunion of Tommy Lee’s band Mötley Crüe in 2018, a Netflix biopic on the group was released a year afterward. The Dirt based on the 2001 biography written by Neil Stauss, was met with generally negative criticism for shying away from the gritty antics that have made the band famous. Here, Tommy Lee is depicted by rapper Machine Gun Kelly (Colson Baker), playing the similarly anarchic rock and roller we’ve come to know the character to be. Two biopics in less than five years isn’t bad going, and undoubtedly help toward filling Lee’s pockets with even more legacy cash. Despite its adaptation being poorly received, the book soared up the best seller’s list while the band has since announced a new tour for 2022. While there have been some complaints from members of Mötley Crüe about creative liberties in Pam & Tommy, it seems any publicity is good publicity when you’re to re-enter the public eye. Even if Tommy Lee’s spousal abuse is once again dredged up in the series, it only aids to the rock and roll, bad boy image that the aging band will need to help market the tour.

Tommy Lee understands that profits aren’t only reaped by producers who want to tell a story, but artists who want to sell theirs. It almost seems a narcissistic exercise for the famous to design their own legacy, and having a studio machine telling your story with Hollywood stars and glamour is a different beast than writing an intimate memoir. Of course, it isn’t ideal to have millions of dollars invested in making you look terrible to audiences around the world. Any cultural exercise is ideological and could never truly capture the totality of a person, despite how truly biographical they make it. But it seems equally strange to control a story in order ensure you come off as well as possible, what if that isn’t true? This is reminiscent of the recent smash-hit Queen biopic Bohemian Rhapsody where guitarist Brian May had a reportedly great influence in telling his version of the story. It has even emerged that the band are even considering a sequel, without their stratospherically famous front man Freddie Mercury. History is written by the victors, would the story follow the same beats if every band member were still alive to tell it?

At times it becomes laughable when studios decide to make a new biopic, with an almost dead pool like guessing game of who will be next. Scrambling for a rock star biopic is the same desire for a blockbuster franchise which gives studios an IP (intellectual property) of an artist with wide ranging appeal. Recently Warner Brothers released a new trailer for Elvis an upcoming biopic about the eponymous star directed by Baz Luhrmann. A figure already steeped in his own mythology, the Elvis biopic will undoubtedly attract a large audience. These pieces become products, used to haul merchandise and increase record sales. In many ways the music biopic is like that of the superhero genre, with the same tried and tested conventions, pre-existing fan base and volume in which they are made. It isn’t just music biopics that Hollywood rushes to produce. Stars will often leap at the chance to show their acting chops in a biopic which, if successful, are almost guaranteed a slew of nominations for varying accolades. Just looking at best actor winners over the past few years is testament to this, as well as the current award season where SAG winner Will Smith is looking to bag the Oscar for best actor with his depiction of Richard Williams in sports biopic King Richard. These performances become prestige; the ability to replicate a real person becomes capital because audiences and academy voters can see the transformation themselves. Reading any review or article of Pam & Tommy you will be hard pressed to find somewhere that doesn’t talk about the ‘transformation’ of Lily James into Pamela Anderson, particularly her prosthetic protuberances.

But biopics don’t have to be bland exercises in cash grabbing or Oscar baiting, a series or film based on the lives of society’s most enigmatic and interesting figures can make for good stories. Other times, producers take subject mythology and create something new outside of the generic rise to fall to God-like status structure. The best example being Todd Haynes’ spectacular I’m Not There, where six actors portray Bob Dylan from a script that takes characters from his songs and Dylan legend to weave into a mesmerising tableau of myth and music. More recently we can also see this in Pablo Larraín’s masterful Spencer where Princess Diana’s divorce from Prince Charles is re-staged as a dark fairy-tale with invented sequences for greater thematic effect. It is perhaps in these instances where depicting real people can be devoid of controversy by avoiding the prefix that what we are watching is ‘true’. It is difficult to depict the truth, it’s harder to explain and control than fiction, other times it’s just plain boring. But in being sold as true, these biopics have us succumb to a binary way of looking at their subjects, not as people but as products of industry and cultural perception. Even a documentary which gives the illusion of truth is no more a mediation than a glossy high budget biopic. John Grierson, one the founding fathers of documentary, famously stated that the medium was “the creative treatment of actuality”.

Biographical products are legacy building exercises that may leave a lasting impression after their subject has long gone, sometimes more than their own work and lives. They reveal something important about how we view these people to create a new pantheon of heroes that pull off their own version of mythological feats. While none of these heroes defeat the hydra or sail tempestuous waves to seek the Golden Fleece, besting the odds to become the world’s biggest star reveals the dreams and desires of a fame hungry society. But by stating these are ‘true’ stories we are often left in a mire of debate and debunk without little understanding of what the truth actually is.