Dense Storytelling: Armando Iannucci’s The Thick of It 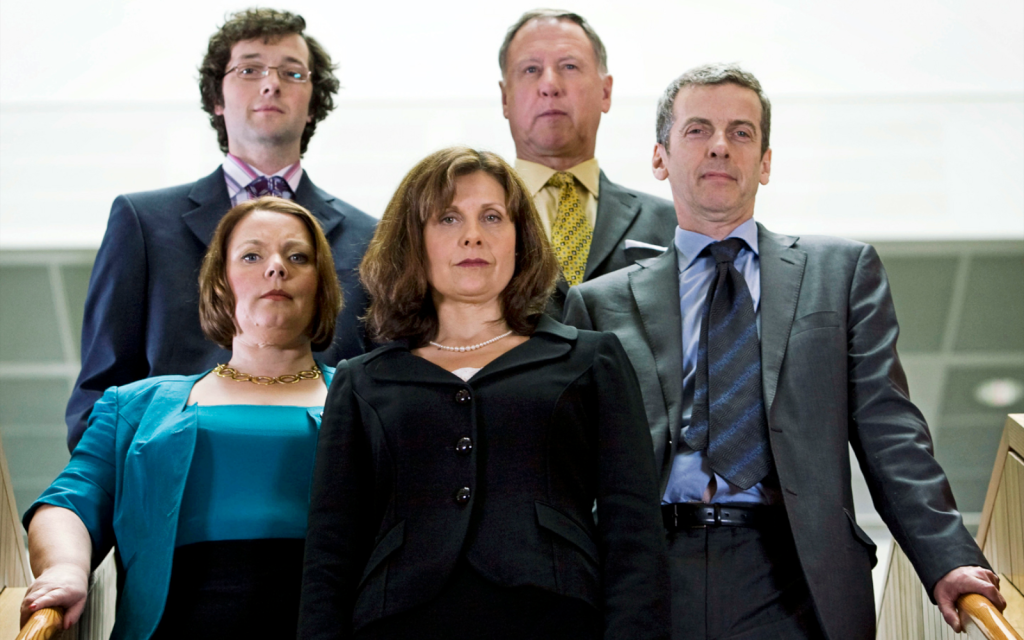 Drinking champagne in the middle of the day during a recession. Who d’you think you are? P. Diddy?

The Thick of It, aired sporadically from 2005 to 2012, coined the term ‘omnishambles’. For a decade, the word has been used in British politics to describe an overwhelming mess or failure – in 2012, then-Opposition Leader Ed Miliband described an “omnishambles Budget” during PMQs. A comedy-drama satirising the inner workings of modern UK administrations, The Thick of It shows a government in which politicians and party officials spend most of their time fighting back against the media as opposed to governing anything. Spin, the public relations tool in which doctored facts and biased viewpoints are used to control media narratives, has been the primary mode of UK governments since the 1980s. Everything from policies to the personal lives of MPs are controlled, criticised, and ‘spun’ in order to make an incompetent government look competent. In the second episode, Terri Coverley, a notoriously useless civil servant, begs the Secretary of State to ‘stop making policy on the hoof’ after being asked to pick between two contradictory policies.

Malcom Tucker, played by Peter Capaldi, is the irreverent Director of Communications for the government – but it becomes increasingly clear that he’s, in fact, the most powerful man in the country. Despite this, he spends most of his time attempting to fix the continuing failures of DoSAC, the Department of Social Affairs and Citizenship, a fictional government department. Even the ministers and advisors in charge note that they have no idea what that means, or what their job actually is. Politicians and government officials are often shown as incompetent and career-obsessed, socially inept and politically vapid. Take the 2007 special, Spinners and Losers, where a new Prime Minister is being chosen – but no-one they find is good enough, and the media spends the entire night with no headline as various factions gain and lose internal support. Everyone acts with such wryness, and everything they say is drenched in irony and profanity. Tucker compares ministers to Myra Hindley, or threatens people with skinning them alive. Anyone with a shred of decency, such as special advisor Glenn Cullen, gets ridiculed and chewed up by the smarmy machine. At no point do politicians, advisors, or civil servants act in the way you would expect them to.

That is, if you can understand what’s happening. The show is filmed cinéma verité, in a mockumentary style lacking a laugh track, incidental music, or joining narration. The dialogue is highly naturalistic, nestled with references to politics and pop culture, the meanings of which are easily lost. You’re thrown into the thick of it, along with the characters. It takes a few episodes to find the general gist of what’s happening, and only on a rewatch can you begin grappling with the events manically unfolding onscreen. It’s not a highbrow series – in the first episode of series three, fresh-faced DoSAC minister Nicola Murray is photographed in front of a billboard, the words cut off in such a way that it reads “I am bent”.

Created by Scottish satirist Armando Iannucci, The Thick of It has such a dense approach to storytelling that it can be quite alienating to first-time viewers. For a while, there’s not even an indication as to whether the government is analogous to New Labour, the party in charge of the real government during the majority of the series – but it becomes very clear this is more than fiction. Series one and two show the government in swing, with careerism and media perceptions governing the direction of everything. Series three, released in 2009, shows this government in the throes of chaos – the real-world financial crash and ensuing loss of support New Labour faced are reflected within the show.

Compared to Number 10, this place is tranquil, yeah? Over there, three hundred yards down the road, I mean it’s like a f*cking cancer ward. There are people in there, f*cking screaming at each other. They’re screaming ‘you gave me this f*cking disease’.

In series four (2012), the government has switched. Now there’s a coalition between the former Opposition and a new, smaller party – analogous for the Conservative-Lib Dem coalition formed in 2010. The old government, now with Nicola Murray somehow as leader, is in Opposition itself. All of these changes are unspoken, because they don’t need to be. If you didn’t keep up with politics at the time, or if you aren’t aware of the politics of over a decade ago, you’ll be lost. Who people are, what they’re referencing, what’s gotten everyone so riled up – it’s easy to get left behind in a mire of needless panic and verbal abuse.

I’m an elected representative of the people, and that was funny.

The documentary style of filming, used more overtly in shows like The Office, adds a fly-on-the-wall element to the proceedings. Series 4 episode 6, showing an inquiry into government leaking, is an hour in length and takes place in one room from just four angles. It manages to be one of the most engaging episodes of television from the decade. Aside from this, the general mania and confusion makes sense – you couldn’t wander into a government building and understand what’s going on. Not because governments are well-oiled machines, far from it. Countries are often run through a series of skin-of-your-teeth omnishambles. Politicians are either Oxbridge alumni or businesspeople with no understanding of the world. They’ll busk meaningless slogans (“Real Money for Real Families… People sounds communist.”) moments before announcing empty policies. When the policy bombs, party officials will find the nearest civil servant to take the blame. There’s rarely a moment where characters are sinister; cowardice and careerism dictate how these people act.

Series four, for example, opens with new DoSAC minister Peter Mannion attempting to launch a ‘digital playground’ policy – but he was last in government during the 80s and has no idea what apps or ‘digital dividends’ are. The announcement ends with him accidentally claiming English names are easier to pronounce than foreign ones. It’s just that sort of show, and it’s great satire about the attempted modernisation (“detoxifying”, as their New Age Spin Doctor puts it) the Conservative Party tried in 2010, old guard Tory ministers following half-heartedly in an attempt to regain power. Now Leader of the Opposition, Nicola Murray spends her time practising how to walk so the press have less reason to make fun of her.  Terri, the ever-useless civil servant, spends the entirety of series four attempting to be made redundant – with the large cash bonus that entails. The ministers block her attempts, despite loathing her, because they’re unbelievably petty. Good luck if you wanted the show to explain any of this to you, though.

I spent ten years detoxifying this party. It’s been a bit like renovating an old, old house. You can take out a sexist beam here, a callous window there, replace the old homophobic roof tile. But after a while you realise that this renovation is doomed, because the foundations are built on what I can only describe as a solid bed of c*nts.

Jesse Armstrong, one of the writers for The Thick of It as well as co-creator of Peep Show, had a recent win with Succession – which takes the same style of dense, chaotic storytelling and applies it to the corporate world. Business and politics are ecospheres which demand a level of reverence for themselves – being cynical and cutthroat is commonly accepted as the standard mode of operations for these places. It’s taken as part of the territory, part of the appeal. The Thick of It refuses to take this in stride. Very rarely are these people as competent and omnipotent as their careers make them out to be. They’re more likely to call floating voters “Quiet Batpeople” or throw cheese at each other.

The Thick of It is available for streaming on BritBox.