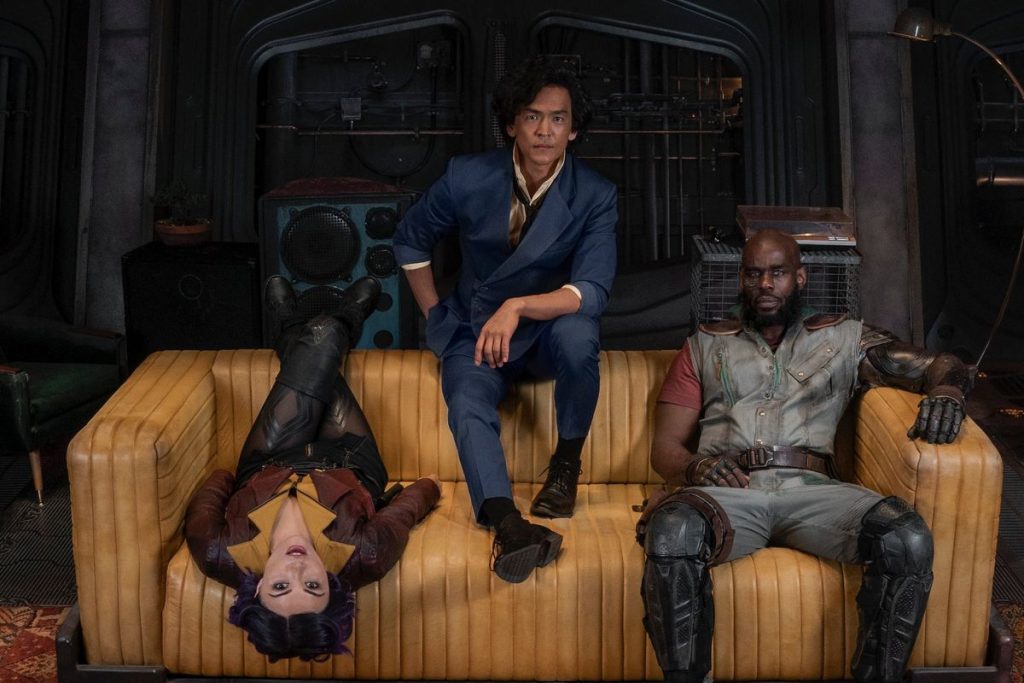 The original animated series of Cowboy Bebop released in 1998, directed by Shinichiro Watanabe, is one of my favourite Japanese animations of all time. The art style, fluid animation, western and neo-noir scenes elevated by the seamless use of science fiction (and let’s not forget the lively jazz and blues music composed by Yoko Kanno!) make it something you just have to watch.

I felt extremely nostalgic when I heard Netflix had made a live-action remake of the series and just had to watch it. Although, we all know live actions have high expectations from the audience.

After a delay in the production cycle caused by a serious on-set injury and a global pandemic, Cowboy Bebop live-action had finally arrived on Netflix. Though I wasn’t disappointed, it didn’t compare to the original series.

This series is set in 2071, fifty years after a devastating accident with a hyperspace gateway made earth near uninhabitable. In turn, humanity has colonised most of the planets and moons in the solar system. During this time, the crime rate is rising, so the Inter Solar System Police (ISSP) set up a contract system where cowboys (bounty hunters) catch criminals and hand them to the ISSP for a cash reward.

Our secretive protagonist, Spike Spiegel works aboard a spaceship called Bebop alongside Jet Black, former ISSP officer, Faye Valentine, an amnesiac con artist, Edward, a flamboyant child who is skilled in the art of hacking, and Ein, a genetically engineered corgi with human intelligence.

Although the series shows us comedic and joyous scenes between Spike and the rest of the crew, the main plot of Cowboy Bebop focuses on the deadly rivalry between him and Vicious, his ex-partner within the Red Dragon Syndicate, one of the most notorious gangs in the galaxy. Naturally, his past as a hitman was kept a secret from the rest of his crew.

Over the course of the series, each of our main characters is faced with devastating mishaps leaving them almost bankrupt and confronting their past demons; Jet’s reason for leaving the ISSP, Faye’s need to find out her true self by regaining her memories after years of cryogenic sleep, and Spike’s never-ending love for Julia but knowing the risks he must take to get her back.

Is the Netflix Adaptation Any Good?

Well, it was exactly how I thought it would be. I didn’t hold high expectations, however, it was definitely fun to watch.

It had the advantageous task of reimaging Watanabe’s 1998 series, and although it didn’t quite flourish the concepts of Cowboy Bebop the same way as the original series, it definitely showed potential for casual viewers.

The first episode begins with Spike leaning against a bar at a garish sex club on mars. He locks eyes with his target: an anxious thief with murderous tendencies. Our hero starts with a cold opening line, “We can do this the easy way, or the hard way,” followed by an adventurous foot chase featuring a rooftop fight, creating memorable moments in the series. To me, this presents Spike perfectly, as in the original series, you’ll often find him making jokes about the sticky situations spiegel puts himself in.

The Netflix series was developed by André Neme and featured scripts by writer Christopher Yost. Despite the cast almost perfectly depicting our protagonists, it was a fairly unbalanced adaptation. The previous 20-minute episodes created in 1998 have been stretched to nearly an hour long, which makes the show drag, feeling longer and less coherent than the original series. Saying that, moments shine in the plot when sourcing the original series’ unique and quirky moments.

Some of the show’s less engaging moments are when it features original material, such as the exhausting episode in which Spike is trapped in a VR time loop, or when Jet searches for the person who took his left arm. Neither events were necessary and took away from the essential plot written in the original 1998 Cowboy Bebop.

However, saying that, I had a lot of fun watching the Netflix adaptation. Although a few events are not needed, and it is a vague representation of the original plot, I still feel like it is worth watching, especially if you haven’t seen the animated version. I still believe that it is lacklustre in comparison to the original 1998 Cowboy Bebop but is still charming, down to the cast, relationships between characters, costuming and so on.

We are left on a cliffhanger where we finally meet Edward (which should have happened earlier in the series). However, Cowboy Bebop will not be returning to Netflix with a season 2 as it has been cancelled, despite earning 74 million viewing hours globally since release. Simply, it wasn’t good enough for fans of the series to justify the time, cost and energy Netflix would need to pile into a season 2. It even struggled to surface on the top viewers’ queues.

Though you have to take into consideration that you will be left with some loose ends by the finale of the series, I recommend you should still watch the Netflix adaptation, if you don’t know much about the original series, that is.