Bob Dylan, Phil Ochs, and the Funny Side of Folk Music 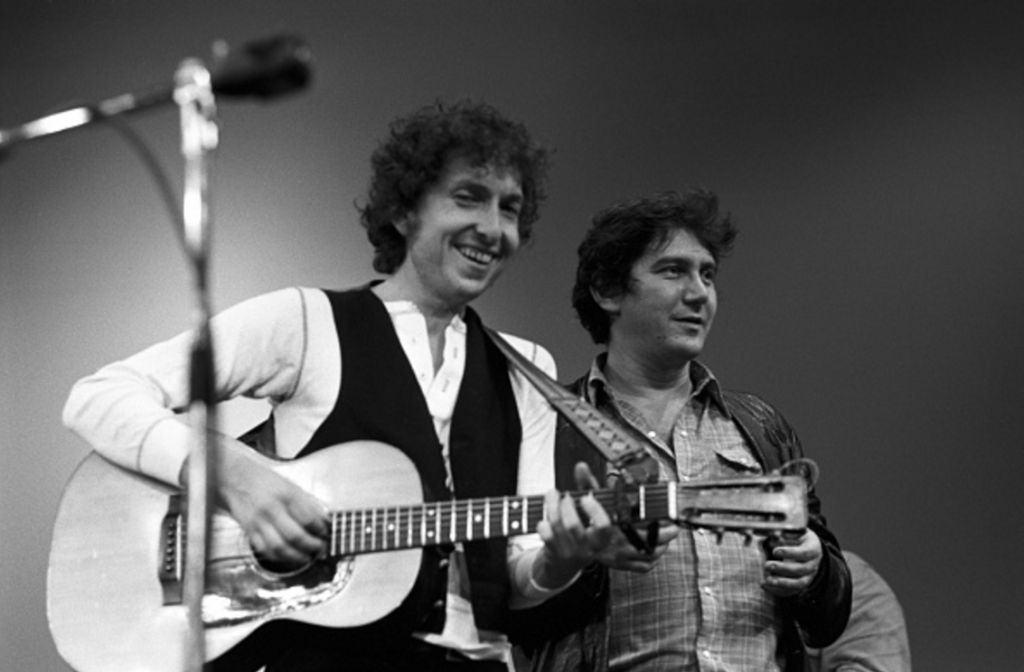 Few music genres are so important to the era in which they were made than American folk revival was to the 1960s. The genre’s origins can be traced back to the 1940s but has become best known for the part it played in activism during a turbulent decade of American history. Even today, the lasting legacy of 60s folk music is still strongly associated with activism, and rightly so. Politics has always been an intrinsic part of the genre, and this era had no shortage of folk musicians taking active roles in protests to bring about the world they sang of. With all these serious political and social ideas at the forefront, there’s a side that’s often forgotten of folk music- the funny side.

Take its biggest star- Bob Dylan. Dylan is best known for his serious, poignant music, like “Blowin in the Wind”, and his politically minded songs like “The Times They Are A-Changin” or “Masters of War”. But unknown to most is how funny he was. Sometimes incredibly witty, sometimes just plain goofy, he had an undeniable talent for making an audience laugh. Some of his early performances played this up and even had long-form jokes that were essentially stand-up comedy. Woven into performances were small comedic quips, like joking that his guitar needed a haircut when he used long strings. In his funnier material, Dylan often performed as a more comedic alter ego of himself.

Musically, Dylan heavily drew from the “talking blues” genre, a staple of folk music. This style is essentially a simple melody mixed with specific topical references and a comedic tone, designed to deliver social commentary. When starting out singing in Greenwich Village clubs and coffeehouses, he was known for satirical songs like “Talkin’ Bear Mountain Picnic Massacre” and “Talkin’ John Birch Paranoid Blues”. According to a recent biography of Dylan’s (No Direction Home), it was these songs and his general wit, rather than his deeper songs, that proved the most popular with audiences in his early days.

Dylan didn’t lose this humour when he began to release his first albums. In fact, “Blowin’ in the Wind” and “Masters of War” are on the same album as one of his best talking blues songs: “Talkin’ World War III Blues”. The song follows Bob asking his psychiatrist for help with dreams of nuclear annihilation, only to find out the psychiatrist has been having the same dream.

As time went on Dylan moved away from this talking blues format, swapping out political undertones for something much sillier, but his sense of humour still remained. 1965 saw the release of his most comedic album, Bringing it all back home, which features the brilliantly surreal, “Bob Dylan’s 115th Dream”. The song is hilarious even from the start, as Dylan bursts into laughter before he can make it through the first line. He then goes on to ramble about a series of outlandish events in which he helps Columbus discover America, aided by fictional characters from Moby Dick.

Dylan’s use of comedy is sometimes attributed to the fact that Greenwich Village’s coffee houses and clubs were often shared by comedians, and it was only natural that audiences grew to expect some humour in performances. But even so, comedy had always been a part of folk music. More specifically, political comedy has always been a part of folk music. Singers like Woody Guthrie, Pete Seeger and Bob Dylan knew to use humour to spread their political messages, but no one understood how to do this better than Phil Ochs.

Phil Ochs was by no means the biggest name in folk music despite being a great talent. He never did reach the level of popularity like that of his friendly rival Bob Dylan. He was known for his sharp wit, radical politics and earnestness that marked both his vocals and his songwriting, but like Dylan, he has an often-forgotten talent for comedy. Listening to his live recordings, one of the first things that sticks out is how much the audience is laughing. He was incredibly witty, which he often showed when performing his distinctive humorous monologues before a song. In one concert, he precedes a heartfelt rendition of “Ringing of Revolution” with comical commentary about the president. Ochs sets the scene by describing a Hollywood film, reading off a list of where “John Wayne plays [president] Lyndon Johnson and Lydon Johnson plays God”.

His talents were particularly well suited for the talking blues style of folk singing that Dylan grew out of, as they gave him the perfect opportunity to show off his talent for balancing humour with sharp, political observations. In “Talking Cuban Crisis”, Ochs muses about the prospect of nuclear war, settling on his only decision being to fly to Mars in “a spaceship getaway car”. And yet, Ochs still manages to criticise the careless attitude of many American commentators of the time- “lets sink Cuba into the sea/and give em democracy-under the water”.

The specificity of the talking blues genre allowed Ochs to really hone in on the political messages of his music, despite their comedic tone. After all, he called himself not a singer but a singing journalist, and it’s an apt description of his style. His songs on current events have the depth and insight of a newspaper article, whilst also being set to a catchy tune. In an era when many folk songs were known for their anti-war sentiments, Ochs’ “Talking Vietnam blues” goes a step further by not only being the first song to mention the war by name but also by being unmatched in detail. He openly criticises overlooked facts, like the disastrous strategic hamlet program and the CIA’s involvement in the assassination of President Diem.

Ochs was adamant about the need to raise awareness for political causes, and there’s no doubt that even in his most comedic songs, he is genuinely committed to the issues that he is singing about. One of his funniest is “Draft dodger rag”, where he describes a draftee giving every excuse in the book to get out of military service. On the surface, it’s one of his most light-hearted songs, but it perfectly captures the desperation of young men trying to avoid being drafted into the Vietnam war, and it ends with a proud declaration of pacifism.

It wasn’t just in music that Ochs campaigned. He also helped organise civil rights rallies, student protests, and labour events. Most notably, he organised the festival of life demonstration against the Vietnam war where he played his anti-war anthem, “I Ain’t Marching Anymore”,  as students in the crowd proudly burned their draft papers- a performance he later called “the highlight” of his career.

But as Dylan was able to craft his own unique sound and folk-rock started to emerge, Phil Ochs’ traditional topical songs were going fast out of fashion. Though political songs were still the norm, humorous political songs were a dying breed. Cynicism began to seep into the movement, with songs like the deeply cynical “Eve of Destruction” becoming a huge hit. For Phil Ochs, this is seen in “Love Me, I’m a Liberal” where Ochs comments on the hypocrisy of liberals who are “10 degrees left of centre in good times/10 degrees right of centre if it affects them personally”. Ochs is as funny as ever, but you can sense a palpable disappointment in his voice as he describes how many people are turning their back on the activism that defined the 60s.

In his personal life, Phil Ochs struggled to come to terms with people leaving an era of change in the past. As political and social progress began to stagnate, so did his career. To make a comeback, he too would abandon traditional topical singing for a more modern style – but he never lost his sense of humour. His final album, Greatest Hits (a joke in itself as he had yet to have any major hits) features “Ten Cents a Coup”, in which he lists the comical ways he wants the president and vice president to assassinate themselves, much to the delight of the audience.

Though his music shifted towards the end of his career, Phil Ochs never lost his humour. Maybe it’s because, in an era of great injustice, he was able to find comedy in the sadness of his times. As he says in ‘Talkin Birmingham Jam’, “I think whenever there’s a deep tragedy there’s also present something of the ridiculous”, and as he says in ‘Ten Cents a Coup’: “I laugh so hard I scream”.