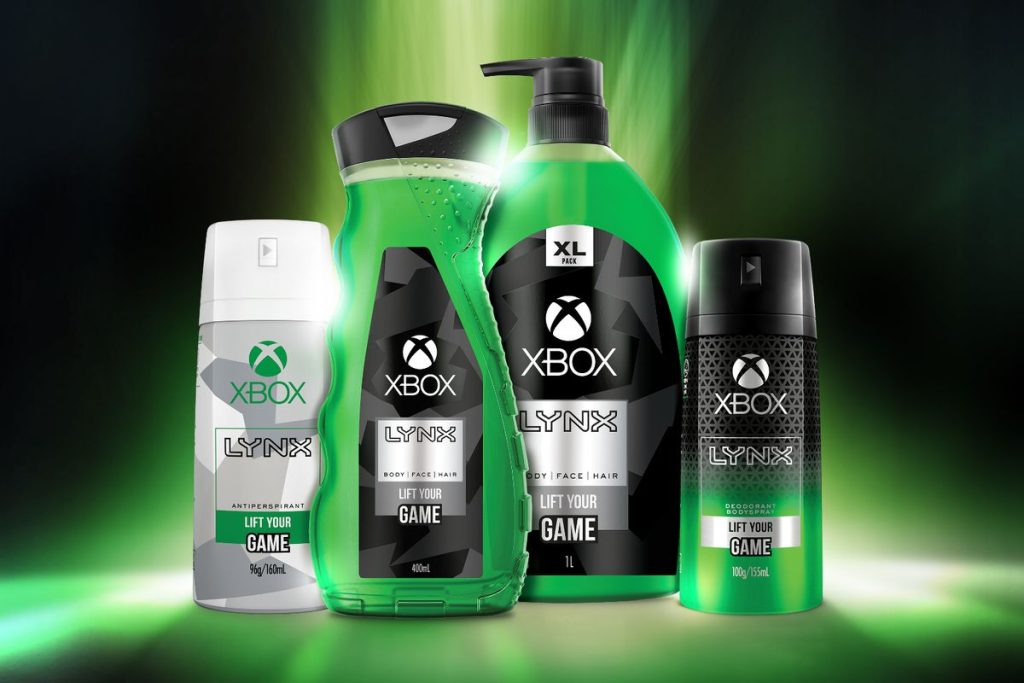 Merch – I love it. You love it. Your mother, who has seen ‘Friends’ a thousand times over, loves it. It’s a great way for fans to feel more involved with a product or piece of media.

When video game merch is done right, we get fun, stylish ways to show off our love for a series. When it’s done wrong, we get controversy at the worst, and something to scratch our heads and laugh at, at the best.

And when it’s done weird, writers like me get paid to scratch our heads and laugh. 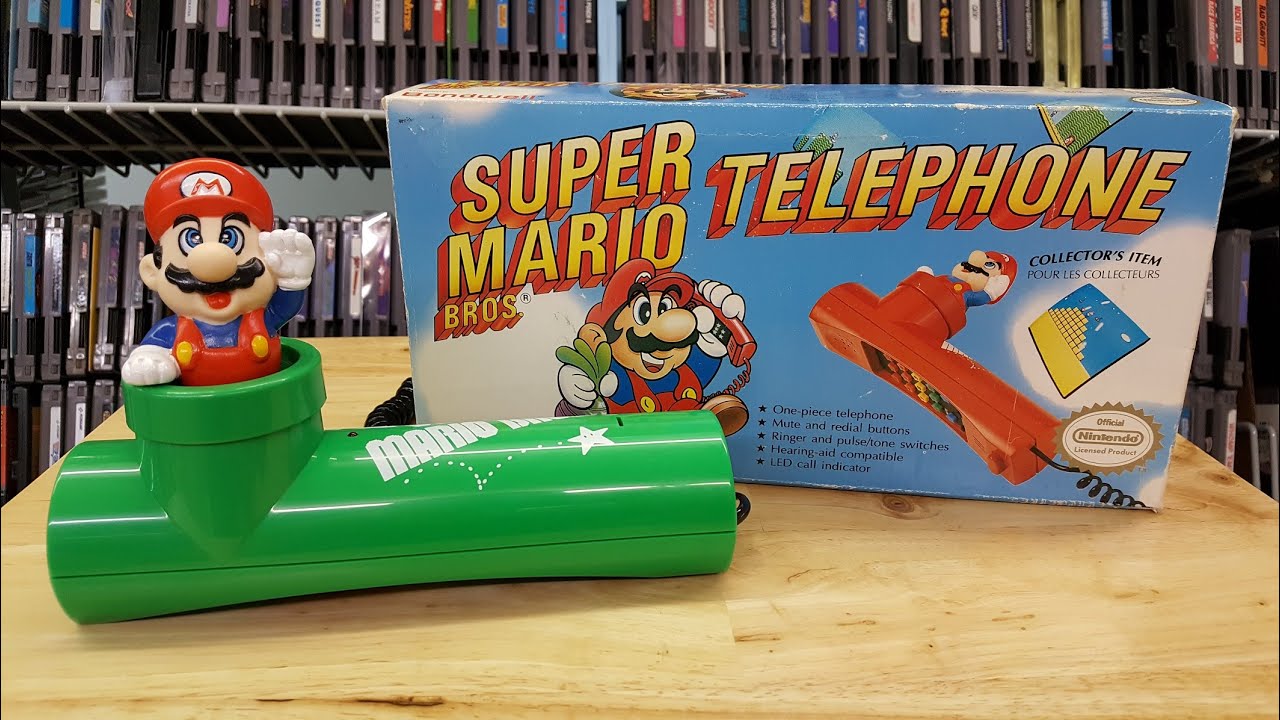 Admittedly, we’re starting off with a pretty cool piece.

Back when corded phones were commonplace, Nintendo of America decided that they were going to spice things up. ‘Super Mario World’ had been released that same year (1990), as had ‘Dr. Mario’, and with cameos in multiple games around that same time, Mario was comfortably in place as the Nintendo mascot. As such, it was inevitable that a myriad of Mario merch would grace the shelves – including this beauty.

The box art is part of the appeal, sporting the cover art for ‘Super Mario Bros. 2’. Only now, Mario is holding a phone in his left hand. Who is he calling? How is this practical? Do they even have phones in Subcon?

The telephone and Super Mario – while both are groundbreaking inventions – is not a mental connection I would have made quickly. But it is a neat little novelty. 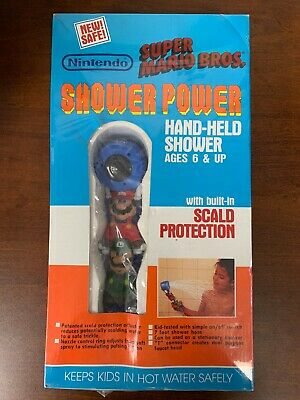 Let’s set the scene a little here: you’re sitting at home. Your Super Mario phone rings. You pick it up. I’ll spare you the conversation details, but you put the phone down, and you’ve now got a date to prepare for.

Gotta start with getting clean, right?

In all fairness, it’s a product geared towards kids, perhaps to make bath/shower time seem fun. But a quick glance at the box will tell you that it boasts a “7-foot shower hose”, so…

The “Shower Power” was in homes long before ‘Super Mario Sunshine’ came to be, so I’m going to stubbornly pretend that this weird piece of merch was the precursor to Sunshine’s F.L.U.D.D.

I just hope it controls better. 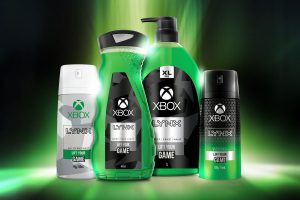 What does an Xbox smell like? According to Microsoft, it’s “a fresh scent of pulsing green citrus, featuring top notes of kaffir lime and winter lemon, aromatic herbal middle notes of mint and sage, and woody bottom notes of patchouli and clearwood”.

I don’t know what any of that has to do with an Xbox, but that doesn’t matter – we’ve got that date to prepare for, and Lynx/Axe has blessed us with a line of hygiene products to “power up” with.

The picture above shows the line of products in its entirety. Four seems reasonable, right? It’s a little less appealing to discover that the second product from the left, is no ordinary shower gel.

The line may not be available anymore (and was only ever available in Australia and New Zealand, for that matter), but “Body | Face | Hair” is a concept that will haunt me for years to come. 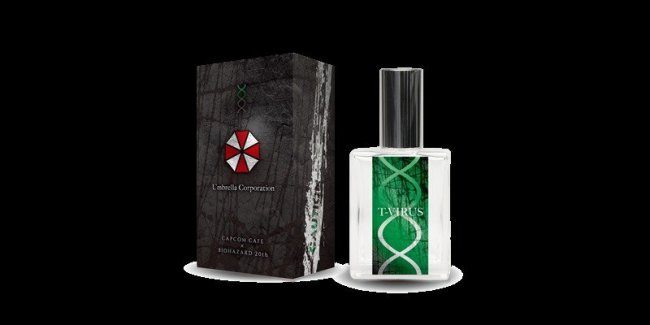 I don’t care if it’s Resi-related – you cannot convince me that ‘T-Virus’ is a fragrance title that appeals to anybody.

Saying that, in my case, it would be completely on-brand if my partner showed up with a bottle of Resident Evil cologne to hand.

To clarify, it’s not the concept itself that justifies this product’s place on the list; fragrances and colognes have been tied to movies and video games on many occasions. But… Resident Evil? It raises the question, if an Xbox smells like citrus and clearwood, what the hell does the Spencer Mansion smell like?!

Hopefully better than what we were served up in certain sequels.

The real answer lies in the gift shop of the Capcom Café in Saitama, Japan, where the product was sold in 2016, and is near-impossible to get your hands on today.

Paired with the deodorant based on the game’s “healing spray”, you’re now sure to smell amazing for your upcoming date. 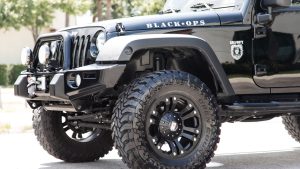 I won’t say much about this one. I’m not sure I need to.

Designed to emulate the Jeeps featured in ‘Call of Duty: Black Ops’, Activision signed off on this $35,000+ limited-edition liability in 2011.

A Jeep Wrangler plastered with “Black Ops” stickers likely won’t wrangle up that date for you. 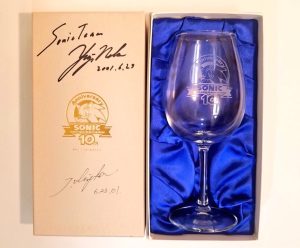 Speaking of ‘limited’, the 10th Anniversary wine glass is seemingly the rarest piece of Sonic the Hedgehog merchandise in existence, as it was given to SEGA employees to mark the release of ‘Sonic Adventure 2’.

It looks beautiful, and came with autographs from Yuji Naka and Takashi Iizuka – the producer and director of the game, respectively. The closest thing to an actual holy grail for collectors of Sonic merchandise.

But again, it’s a Sonic the Hedgehog wine glass. Put those words together in your mind. 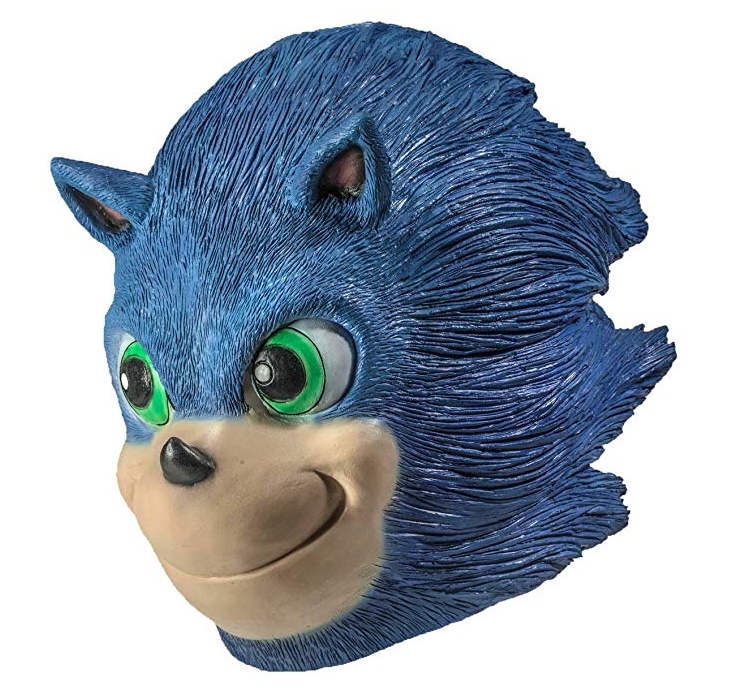 Every day we stray further from God, and every day I thank the internet for bullying Paramount into getting the Sonic movie redesigned.

Somebody greenlit this. There are children out there who own this.

Even SEGA was reportedly unhappy with the original design of Sonic’s eyes. So how the monstrosity you see above this came to be? We may never understand.

Still, when the date doesn’t go as planned, a latex Sonic the Hedgehog mask is seemingly the unmatched way to hide your strike-out shame.

(I’ll give up on the dating visual now.) 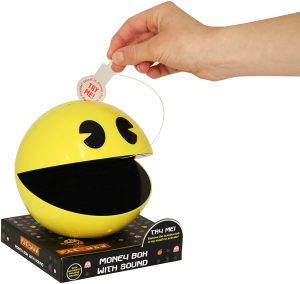 This is an acceptable Pac-Man coin bank. 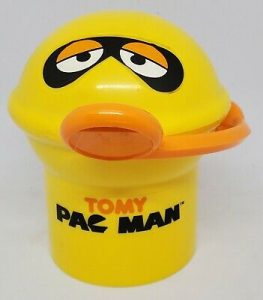 If the product itself did not yell “PAC MAN” at me in block letters, I would not have known that I was looking at Pac-Man. I was surprised to learn that this item was such a rarity. To say that it was a missed opportunity, would be a slap in the face of missed opportunities. This is a piñata of Horstachio… a piñata character… from ‘Viva Piñata’.

Developer Rare didn’t even bother to fill the thing with goodies but given how difficult it is to get your hands on one of these, it might not be something fans are eager to break open. 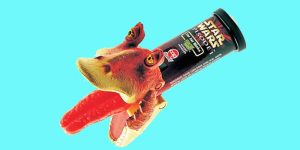 The 1999 cinematic debut of ‘Star Wars: The Phantom Menace’, and the release of the video game a month later gave us not one, but two opportunities to wish that we no longer had eyes.

I’m not a Star Wars fan by any stretch of the imagination, but one thing I do know is that most people would prefer if Jar Jar Binks stopped talking. What I am less sure of however, is that putting his tongue in your mouth is the way to do it. 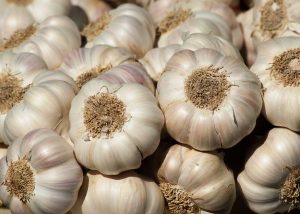 How do you promote a mediocre vampire game? Please direct your answer to publisher Crimson Cow, as they’ve clearly got no idea either.

Along with the genuine bulb of garlic came a link to a cryptic web address, which sent the lucky few journalists who received the garlic to an equally cryptic flash demo that revealed very little about the game itself. Genius.

I’m not against using cooking staples to market video games, but perhaps the garlic would be better used to sell us a new Warioware instead. 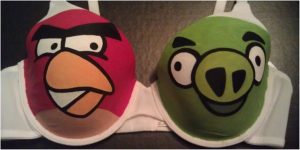 Okay, so I’m not sure this one really exists. But, real or not, I refuse to go into detail about why an ANGRY BIRDS BRA is a weird piece of merchandise. What’s cooler than a severed finger? A severed finger covered in black gunk, sent out to promote a horror game that was decent at best.

I understand the need to make the blood black, but why is there so much of it? The thing we’re told is a finger is just sitting in the corner like a sunken stone, looking not-very-scary. 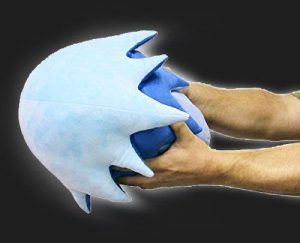 It may look like a weird squid egg. It may lose its novelty after one “HADOUKEN!”. But I’ll be damned if it isn’t kind of adorable.

Be sure to thank Capcom for allowing us to harness the energy of our favorite fighting game characters. I have no doubt they’ll respond by releasing yet another edition of ‘Street Fighter 2’.

For the record, I hate that this one makes sense.

Using the toilet is how you save your game in ‘No More Heroes’, so Travis Touchdown-themed TP was a stroke of genius on the part of the marketing team. That does not excuse it from being an incredibly odd piece of merchandise to have in your home.

Don’t believe me? Buy some for yourself, and then try explaining it to unassuming houseguests.