Who’s Afraid of Red, Yellow and Blue: The Far Right and Modern Art 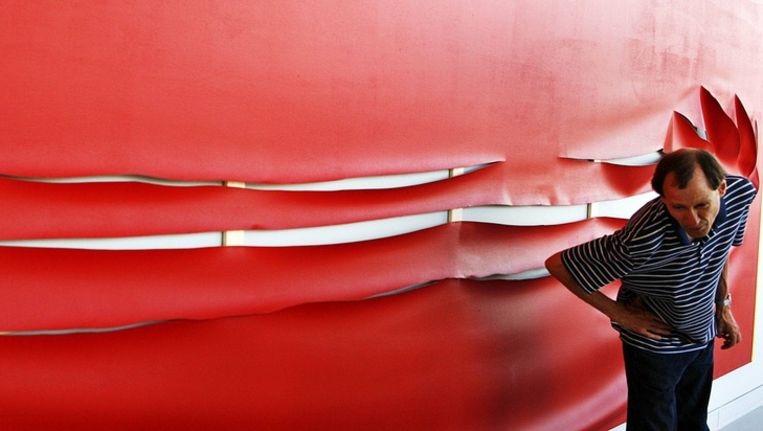 Who’s Afraid of Red, Yellow and Blue III is a 1967 painting by Barnett Newman, an American artist who is seen as one of the most important figures in abstract expressionism. It’s the third out of four pieces in the series, each a visually-simplistic combination of block colours. III measures at roughly two metres by five metres, predominantly a bright red, with a line of blue at the left end and a thinner line of yellow at the right end. It has been on display at the Stedelijk Museum in Amsterdam since its completion. In 1986, sixteen years after Newman’s death, it was vandalised by Gerard Jan van Bladeren. He tore into the painting with a knife, and was sent to prison for five months. Restoration efforts, totalling at $400,000, were widely considered to be a failure – the techniques Newman used were a mystery to those undertaking the restoration, and the reconstruction was called a ‘second act of vandalism’.

In 1997, again at the Stedelijk, the now-41-year-old van Bladeren took a Stanley knife to Newman’s Cathedra and slashed it as many as seven times. He made no attempt to flee, and simply waited for museum guards to apprehend him at the scene. These were not crimes of which the criminal felt shame. None of this, unfortunately, comes as a surprise when you know that Newman was Jewish.

Abstract expressionism is an art movement born in New York City in the aftermath of the Second World War. Newman is quoted as saying in the late 1940s that “we are in the process of making the world, to a certain extent, in our own image”. There were widespread and mainstream changes in the art world at this time; A Streetcar Named Desire, by gay playwright Tennessee Williams, was first performed in 1947. Just a few years earlier that would’ve been unthinkable. The painter Frank Badur, writing about Newman, said that “the tolerance and freedom that a society grants its art and artists are a measure of its own tolerance, its own freedom”.

“Modern art”, the catch-all term used often to denigrate any work that ignores or rejects traditional Western standards of art and beauty, has been targeted by the far-right for so long that you couldn’t call it modern anyway. In 1937, the Nazi Party displayed ‘degenerate art’ in the “Entartete Kunst” exhibition. Organised by Adolf Ziegler, it displayed 650 works that had been previously stolen from German museums under the guise that they “insult[ed] German feeling, or destroy[ed] or confuse[d] natural form or simply reveal[ed] an absence of adequate manual and artistic skill”. The argument being that these pieces showed no sign of craft that ‘real art’ does, such as Romantic landscapes and sculptures, so to celebrate them is an offence to the German people and their culture. It’s thinly-veiled, not even taking into account that a large proportion of the works were by Jewish or black artists.

The Nazis had even confiscated some works by Pablo Picasso, though these weren’t shown in the exhibition. His Spanish nationality was less useful for their aims of drumming up fears about the degradation of Germany and its people. What the Nazis ended up doing was proving those artists right in their aims – certain ideals regarding art and the people who make it are wrong.

Broken Obelisk is another work by Newman, this one a sculpture designed between 1963 and 1967. It’s a strange piece, a visibly torn-up obelisk upturned on itself, rusted, as if balancing impossibly on its own base. It’s visually reminiscent of both the Washington Monument and the Pyramids of Giza.  For me, Broken Obelisk brings up a feeling of the deep past. The last remaining relic of some once-great civilisation. In 2018, one of the three versions was vandalised by white supremacists. White paint was poured into the reflective pool it sits within, and scattered around were posters with the phrase “it’s okay to be white”. It had been vandalised similarly before, with swastikas spraypainted across it.

What “modern art” does, directly or indirectly, is question what constitutes ‘proper art’. The idea that Rembrandt and Shakespeare are the only valid forms of artistic expression lies directly in those artists being Christian, western Europeans. By widening the frame, by hanging a Picasso, Newman, or a Van Gogh under the same roof as a Friedrich, you visualise the idea that certain ideas are not superior. The privileges of aristocratic, white Europeans are directly threatened by the mere existence of “modern art”, which makes it a target.

Denigrating modern art is easy when your view of art is settled within those privileges. The lifelike sculptures of Ron Mueck are hyper-realistic, obsessed with the minute details of human faces and bodies. Sometimes he creates large faces, where the soft and natural imperfections of a human head are staring back at you. Other times he crafts scaled down figures, where those tiny details on a realistic-but-frozen body seem more concentrated. Regardless, they make you feel more connected to those around you; you’re more likely to recognise your own imperfections than those of others, but not when you’re confronted by a Mueck. That only feels like a threat when you’re looking to pull people apart.