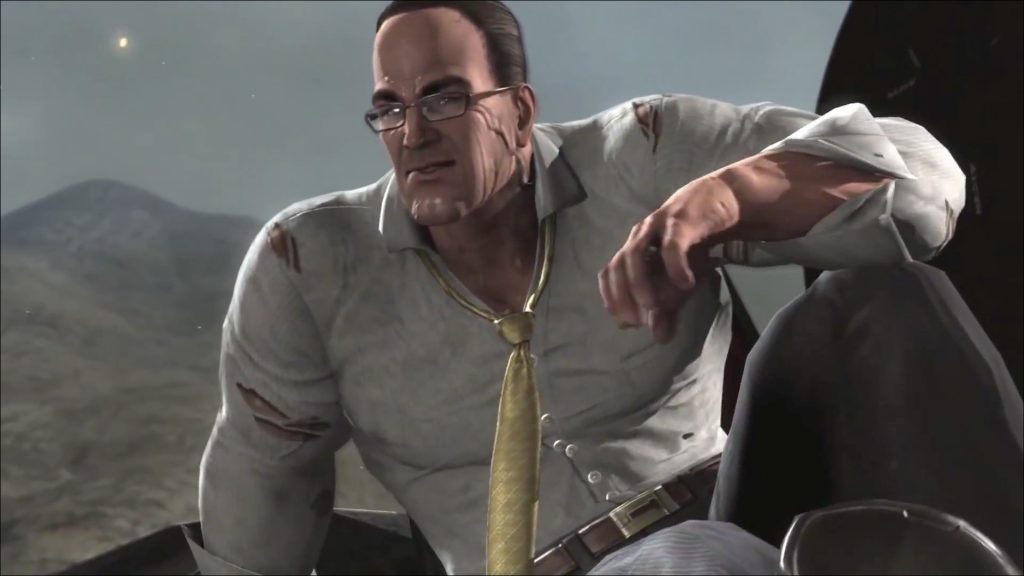 Now, you may be wondering. What is this image doing in an article about ‘serious themes’? Well, my friend, I’m here to tell you.

Metal Gear Rising: Revengeance is a hack-and-slash action game developed and released by PlatinumGames in 2013, as a spin-off from the very popular Metal Gear series. It follows the cyborg Raiden in the far-off year of 2018, where cyborg soldiers are used around the world by Private Military Companies (PMCs) and massive Metal Gears (giant unmanned machines of death), and other robotic weapons are as commonplace as any other vehicle of war. Wow, what a world we lived in four years ago, huh?

Raiden and the PMC he works under, Maverick, is hired to escort an African Prime Minister through a war-torn country, when they are attacked by another PMC by the name of Desperado. Prime Minister N’Mani is kidnapped and Raiden battles through cyborgs and destroys one of his old enemies, Metal Gear RAY (see Metal Gear Solid 2 for the history of these two) in an epic high-octane, heavy metal-accompanied battle. He manages to get on a train following the kidnapper, an American cyborg by the name of Sundowner, as well as the Brazilian samurai Jetstream Sam.

Is this sounding crazy enough yet?

N’Mani is executed in front of Raiden, all while Sundowner spouts off about the need for war in the country to fuel war economies – giving rise to the need for PMCs like Desperado.

Starting to feel a bit more believable now, isn’t it?

Sundowner escapes while Sam duels Raiden, effortlessly defeating him, cutting out an eye and severing an arm (again). This fuels Raiden’s revenge/vengeance/Revengeance to track down and dismantle Desperado’s operations across the globe, leading to confrontations with other enhanced cyborgs that give their own philosophies and reasoning for being part of Desperado.

The first of these is Mistral, a French-Algerian cyborg that Raiden encounters in Abkhazia. She explains that she was orphaned during the Algerian Civil War. Having found her parents’ killers, ‘butchered’ them, she realised that being a killer was her calling. That was until she grew bored of it – until she met someone that gave her a new ideal. The song playing during her battle further accentuates this, “I’ve come here from nowhere” and “I’ve finally found what I was looking for, a place where I can be without remorse.”

Already we see a character that seems frighteningly real – someone forced to kill young, radicalised by wars and weaponised by a powerful group. It feels so serious all while you’re leaping about, battling a lady with a suit that has a dozen or so robotic arms stretching out from it, wielding a weapon literally made out of the same robotic arms, holding onto each other as a polearm that doubles as a whip – just what is going on?

Raiden is next headed to Mexico, where he finds an underground research facility where orphans are taken off the streets, forced to have their brains removed and put into VR training programs that force them to become killers. This plan is orchestrated in joint efforts by Sundowner and a presidential candidate – Senator Steven Armstrong, head of the biggest PMC in the world, World Marshal.

Enraged by the disgusting plan in motion, Raiden quits Maverick and attacks the World Marshal headquarters in Denver, where he encounters Sam once again. Sam begins to taunt Raiden about the faceless cyborgs he’s been cutting through thus far and plays out what each one he’s been fighting are thinking – usually including the fact that they were injured in a war and needed cybernetics to survive, or that they were desperate for money to bring their mother to the States. These thoughts are suppressed by programs that only allow the cyborgs to do their duties, and not feel fear or pain.

Raiden is incredibly distressed at this point, recalling his own past as a child soldier where he was nicknamed “Jack the Ripper” due to the number he killed. This culminates in meeting another general of Desperado, Monsoon.

Monsoon, easily the most philosophical of the characters, is very nihilistic, believing only in war and memes (no, not that kind)- in this context it refers to ‘the DNA of the soul.’ Things that are passed down through generations, shaping culture and human will, “Envy, greed, despair… all memes. All passed along.” He states that he learnt this from being a child soldier in Phnom Penh, and after monologuing for some time, Raiden responds that, while he tried to dismiss the pleasure he got from killing, he couldn’t hide it forever. He turns off his pain inhibitors and remarks that the pain is why he fights – not for justice or any other reason, and embraces the ‘Jack the Ripper’ persona that he has been nicknamed with before.

This whole sequence is… crazy. Here we are, witnessing an emotionally unstable Raiden going absolutely insane and cackling at being stabbed, slaughtering some henchmen, and gleefully challenging Monsoon to a duel. And then, Monsoon himself, who can separate his body into dozens of pieces and control them all individually with magnetic force, will literally send his legs running over to kick you in the ass while fighting him. Just what is going on?

And yet, we get another glimpse into something real. The sheer misanthropy exhibited by Monsoon, who sees only the worst of the world due to the war he grew up in, who is now in a position of such power and yet, doesn’t give a damn whether he, nor the rest of the world, lives or dies. His theme song talks about a gentle rain, trying to wash away pain and suffering, but becomes a storm as it has no effect on him, “And it will never rest until the clouds are clear, until it finds my dreams have disappeared.”

From there, Raiden finds Sundowner and kills him – rather unceremoniously compared to the others. Sundowner is but a mass murderer, POW torturer, body desecrater, and overall war criminal, who just wants to see and partake in constant war. He is, however, very American – read into this however you want. One of his lines is literally, “Like the good ol days after 9/11!” What a character. The captive brains are recovered, and Sundowner reveals a plan from Armstrong – Operation Tecumseh – read into this however you want as well.

Raiden deduces this plan must involve the President, who is flying to Pakistan and will likely be assassinated as part of the plot. He races to a space flight company that could get him to Pakistan fast enough before the President does, but encounters Sam for a final time before he can get there. They duel, in the most satisfying battle of the game yet, and Raiden kills Sam, as simply as that.

Upon arriving in Pakistan, Raiden finds Armstrong piloting a hulking Metal Gear ‘EXCELSUS’, who explains that he would blame the death of American personnel on Pakistan. This in turn would fuel America’s vengeance and call for another War on Terror – thus increasing the need for PMCs, with Armstrong controlling them and becoming elected for certain.

After the destruction of the Metal Gear, Armstrong comes out, does a sumo stance, absorbs energy from the machine, and begins to feasibly beat down Raiden himself. “Played college ball y’know” he remarks, while ripping apart Raiden’s metal visor with his bare hands.

The whole scene just gets crazier and funnier as it goes. But what really strikes me is the conversation itself. Raiden comes back at him, saying all he cares about is “lining your own pockets. That, and your approval ratings. You’ve got no principles, just like all the rest. If America’s gone to s***, you’re just another maggot crawling in the pile.”

“I do need capital. And votes. Wanna know why? I have a dream!”

It just gets wilder and wilder. But it feels so much more real with every line.

Armstrong claims he wants every American to have true free will, where it’s survival of the fittest. And then, immediately, it goes back to, “F*** all these limp-d*** lawyers and chicken-s*** bureaucrats. F*** this 24/7 internet spew of trivia and celebrity bulls***. F*** American pride, f*** the media, f*** all of it!”

“The strongest will thrive, free to live as they see fit, THEY’LL MAKE AMERICA GREAT AGAIN!”

Sounds… scarily familiar, doesn’t it? A completely unhinged, ultra-right-wing politician, promoting his own election by fuelling racist hatred and damning the ‘weak’.

And while this all just devolves into pure insanity, we look back on this game as a whole. It’s ridiculous, it’s over the top, it’s insanely entertaining, but it’s also frighteningly believable, in a couple ways at least. We don’t have cyborg warriors with katanas and massive mechanical weapons yet, but the philosophy behind Armstrong and his supplicants is certainly out there somewhere.