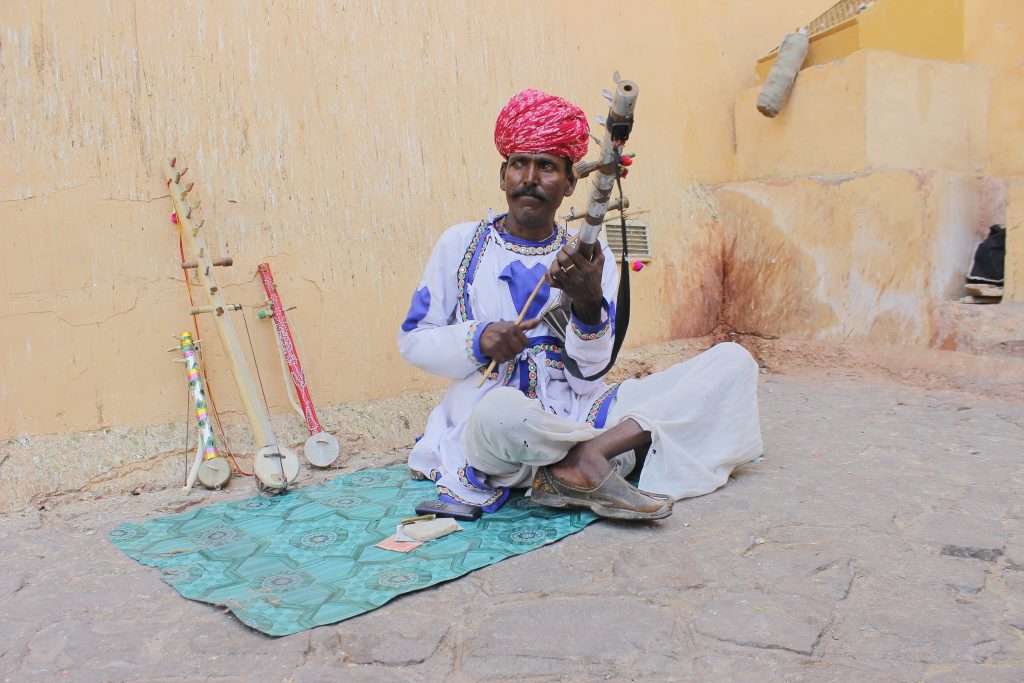 Music from India isn’t all just Bollywood and mantras. Due to the vastness and diversity of India, its music encompasses numerous genres including folk, Bollywood, classical, rock and pop.

The musical history of India spans across several millennia with its rich and unique sounds spreading to every corner of this sub-continent, forming an essential part of India’s history, culture, and spirituality.

The History and Origins of Indian Music

Music in India has always been an integral part of life, literally. It is believed the sound of music can be traced back to the beginning of the universe itself. In Hindu mythology, the first sound is the Naadbrahma which translates to ‘the sound of God’ from the Sanskrit language. It is considered the most natural sound in the universe.

Another myth connects the origin of sound and dance to Tandava, a divine dance practised by several deities but most notably Shiva, the Hindu God that controls time and is the gatekeeper for the end of days. It is said that he sent the sage Narada (Hindu messenger for the Gods) down to earth to introduce the art of music to mankind from the heavens. Just like dance, India’s original musical purpose was for devotion, and thus restricted the art form to religious and ritualistic purposes, mainly used in temples. In time, this developed into folk music and other musical forms, gradually building their own musical characteristics.

Indian music has been documented since the Vedic times where the concept of Naadbrahma was prevalent. Every piece of organised music from India originates from the Samaveda, the Veda of melodies and chants; all deriving from the Hindu religion. The earliest raga owes its origins to the Samaveda. In the late Vedic Period music was written in the form of Samgana; chanting the verses of the Vedic script in a musical pattern.

The rich tradition of Indian classical music originated in South Asia 6000 years ago, when the sacred Vedic script was the focus of all musical performances. Chanting the Vedic scriptures then developed a musical system of different notes and rhythmic cycles.

These notes and rhythmic patterns are closely related to nature, taking inspiration from seasons and times of the day. These are called ‘ragas’ or musical moods and further chartered into time cycles called ‘taals‘.

What Is a Raga?

Raga, directly translated to ‘colour’ or ‘passion’ from Sanskrit, is a melodic framework in the classical music of India, Pakistan and Bangladesh, focusing on improvisation and composition.

Simply put, a raga is based on a scale, traditionally ordered in a way so they appear as melodies, with a given set of notes; the basic elements of a raga can be written down as a scale, ascending or descending. Using only certain notes, accentuating specific degrees in the scale, and by moving from note to note in ways distinctive to the raga, allows the performer to create a mood or atmosphere that is unique to the raga they perform.

Today, there are several hundred ragas in use, with thousands more possible in theory. Due to the nature of the raga, in South Asia it is considered the most important component of music making. Understandably, ragas play a primary role in Indian music theory.

There are two types of raga. In northern India, they are defined by focusing on characteristics such as your mood, the seasons, and time of the day; in southern India, ragas are formed by the specialised traits of each scale. Whilst compositions are established, this gives the performer freedom to their own dynamic expression, making every single performance unique.

Indian music can be defined by its unique features, especially when it comes to musical instruments. Indian instrumentation is one of the most distinctive and recognisable, globally, due to their unique string and drum instruments.

The sitar is a stringed instrument from the lute family. This is often played within northern India, Pakistan, and Bangladesh. Playing the sitar is not an easy task as it typically measures about 4 feet in length.This instrument is made with a deep pear-shaped gourd body, and a long, wide hollow wooden neck, which includes 16 side tuning pegs and two on the front. It has 20 movable frets and metal strings (the number of strings vary from 18, 19, 20, or 21

The tambura is a long-necked fretless lute. Its neck is hollow and normally ranges between 40–60 inches in length, and usually has four metal strings. Tambura’s have a complicated system for precision tuning; it is done by placing bits of wool or silk between the strings and the lower bridge, also by adjusting small beads anchored to the strings. The body varies depending on whether it’s made in southern India; a hollow piece of jackwood, while in the northern parts of India, it is made from a gourd.

The tabla is the name given to a pair of small drums that have been essential in Hindustani music since the 18th century.

The higher-pitched drum sits on the right hand side and individually, it is referred to as the tabla or daya (meaning “right”). It is a single-headed drum usually made of wood and the skin is kept in place by thong lacings and wooden dowels; these are tapped with a hammer to retune the drums to the tonic note of the raga the musician is performing. The left hand drum is called the baya which will perform the bass notes.

Alongside hindustani music and Carnatic music, several different genres are unique to India.

Fusion music is one of the more modern genres sprung from India which originated with Ali Akbar Khan’s 1955 performance in the USA. Fusion music often combines rock and roll elements with Indian music.

Bollywood music is one of the most popular forms of Indian music. The Hindi film industry, alongside other Indian film companies, develop thousands of films a year, the majority  being musicals which feature sophisticated song and dance numbers.

India is full of cultural diversity, meaning each different region in India has perfected its own form of folk music. Due to this, folk music is sung in a multitude of languages and dialects throughout the nation.

This common and popular form of music in India owes its origins to Arabic poetry. However, it is not a musical form, but a poetic recitation. Today, it is often established as an Urdu song with the lyrics being the main focus.

There are various other genres within India that differ depending on the region, instrumentation, raga and so on.

How to Make Your Own Indian music

Due to the complexities of Indian musical instruments and unique musical forms and theory, recreating your own composition inspired by Indian music can be a daunting task. However, don’t let that thought stop you as what you create will be unlike anything you have written before.

To simplify your music making, you should choose a specific genre you want to replicate, and apply its musical characteristics to your composition. This short tutorial will focus on recreating Hindustani classical music.

Indian instrumentation is an integral part of your music. Without the sounds of a sitar, tabla, sarangh, bansuri, and Tambura, it can be hard to define what you are creating; though India’s unique musical forms and theory does help.

Unfortunately, getting a physical version of these instruments is not easy nor particularly affordable; however, if you compose digitally, you can gain access to a variety of free or paid VSTs sampling their sounds. I pay monthly subscriptions to composer cloud’s East West Libraries, in which I have access to the majority of the instrument samples that I have previously mentioned.

If you are unable to pay for VSTs, don’t worry as most DAWs will have a free music library at your disposal that will most likely have a section for world instruments that you can look through. For example, I use Logic Pro X whilst composing and they give you access to free samples of a sitar, bansuri, and a generic Indian and Middle Eastern drum kit.

You can always add western classical instruments for a more modern, or cinematic feel to your music, or as substitutions if you can’t find the right instrument.

In Indian classical music, rhythms are written in such an exclusive way that you need to understand them before you apply them. Indian rhythms are called taals and they are written as cycles.

Theoretically speaking, all rhythms cycle because they tend to repeat themselves, over and over. Especially short, 4-beat rhythms which can be seen as linear. In Indian classical music however, you tend to have longer drum patterns; 16 beats and 12 beats are commonly used, and are not understood unless you view them as a cycle. Refer to this guide on taals for more detailed information and how you can apply them into your music.

Ragas are complicated, at least for me, as I have not been trained in Indian classical music. However, you’ll want to refer to them when writing. There are hundreds of different ragas and these are just a few that may inspire you during your creative process. Indian scales can be written as aroh (ascending pattern) or avaroh (Descending pattern). Make sure you choose wisely which raga you write with as every single one in Northern India is inspired by different things; nature, femininity, moods etc. So, what you choose will define the atmosphere of your track.