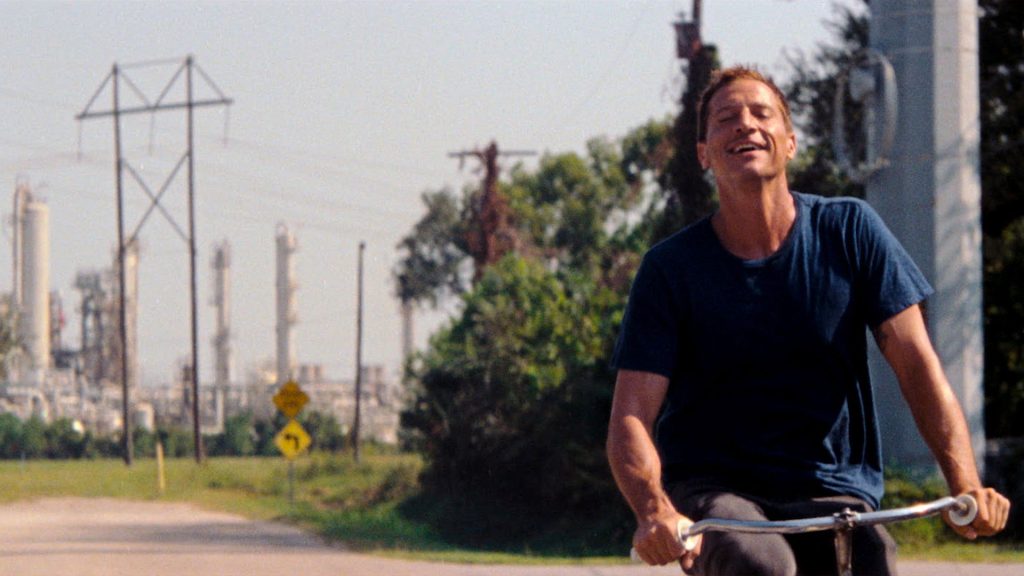 For over two decades director Sean Baker has directed some of the timeliest and most interesting films that capture the crumbling American dream and the people left in its wake. His previous feature The Florida Project (2017) tackled the grim reality of poverty from the perspective of a childhood fantasy around a motel on the borders of the biggest fantasy factory there is: Disneyland. His latest, Red Rocket takes us to a Texas gulf city outskirt in the midst of the 2016 presidential campaign, uncovering the US’ dark underbelly and emerging as one of the best films of 2021.

On such a low budget, it is almost unbelievable that the film’s most impressive sequences are happenstance. In one dazzling moment, a steaming train rushes across the barren Texan landscape, like a western, cutting across the frame and wishing the characters an extended honk that completely drowns their dialogue. This instance of opportunity not only heightens the scene’s insincerity but aids in Baker’s homage to neo-realist style. This style is peppered throughout his work such as the use of aforementioned on-location filming, casting of non-professional actors and the choice to centre projects around the fringes of contemporary American society. It is always striking how Baker reveals the consciousness of the nation through his characters. Mikey is the ultimate product of Trump’s America, almost a miniature candidate himself. He is a showman, extremely likable with a chameleon-like ability to schmooze with everybody with a similarly vain, self-serving and manipulative persona. Mikey’s ability to look as if he’s making a difference in his community, whether it’s giving advice, helping pay the rent or trying to make dreams come true is only a facade to get what he wants. His disdain for the people around him is evident through his disparaging comments, aversion to honesty and behind the scenes scheming. When his plans go awry in ways that only Mikey is to blame, he takes no responsibility and attempts to distance himself as far away as possible. He’s charming and Rex’ performance lures you into liking him, wanting to be around him, it is only as cracks in his character show that the audience worry about how far he is willing to go. Mikey and those around him are projections of a country seeped in performance and alternating narratives. The truth is continually drip fed to us, and it is never clear whether what we hear is a lie or not. People act to become the people they are not, becoming successes; war heroes; good mothers; and even friends. This soon leads to a bittersweet comeuppance when the community finally comes together in evicting the ‘suitcase pimp’ (Male performers who leech off their female counterparts) who has worked to exploit them. But in their imagined triumph, these characters have in reality done nothing to change things in the long term, instead opting for an emotionally charged quick solution. One can only imagine how they do this again later in the year.

Baker’s subjects are often on the fringes of society, sex workers, dispossessed mothers, drug addicts and porn stars. These are people often excluded from a society of consumption, conservatism and self-interest that looks the other way. Baker’s films take a microscope at the people that late-stage capitalism affects and the unreality it presents. It’s these unrealities that blocks these characters, who live in incredibly real and precarious situations, out and leaves them living in an underclass.  His films are often judiciously researched and before embarking on Red Rocket, Baker and co-writer Chris Bergoch had met several real-life Mikey Sabers. It is this realism that gives a chill to Rex’s performance, leaving audiences shuddering at his scheme to indoctrinate young and hopeful Strawberry into the murk of the adult film industry.  Every performance in Red Rocket, most of which come from non-actors, are superb. Real-life oil-refinery worker Brittney Rodriguez as June, the competent, take-no-prisoners consigliere of her mother’s petty drug ring, is particularly stand-out. Suzanna Son’s debut as Strawberry is fantastic, forming the Texan teen into a performance which is both sweet and surprising

Red Rocket has garnered some criticism for how dislikeable its protagonist is while always proving to be both mesmerizing and engaging, you almost want to root for him. But isn’t that the point? While Sean Baker has staunchly refused to make political comment, isn’t Mikey a product of the times? Of a political class so vain, inconsiderate and self-serving that, even when discovered, will only continue on their crusade of narcissism. There are no real consequences for these people, even when Mikey gets his eventual comeuppance it never really feels like justice. This certainly feels like a timely sentiment when comparing to real characters on the world stage that prove that as far as suitcase pimps go, Mikey Saber is only a handbag.