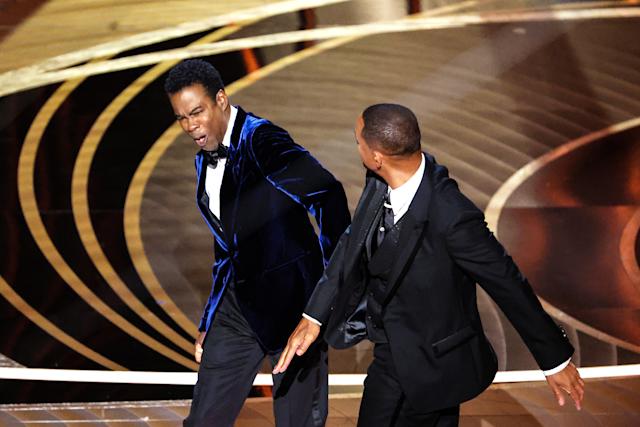 During the Oscar’s, Chris Rock made a “GI Jane” joke on Will Smith’s wife, who struggles with hair loss due to alopecia. After the comment was made, Will Smith seemed to be laughing towards the joke along with the crowd, until he realised his wife was not so happy about it. Afterwards, Will appears walking on stage towards Chris Rock, then slaps him and walks back smiling; this was all captured on Live TV. However, it doesn’t end here, once he was seated down, he yells “Get my wife’s name out your F*ckin Mouth” towards Chris Rock at the Oscars, and the crowd seems to be very stunned from what just happened. Was it acceptable for Will Smith to slap Chris Rock after he made the GI Jane joke? Well let’s see what the media thinks…

The media has been gossiping about the situation since the incident, and it does not seem good on Will Smith’s side. Apparently, Jada Pinkett Smith’s wished that Will didn’t get physical at the Oscars according to the Daily Mail and other reports. This makes you wonder if Will Smith did the right thing or not? It seems like he was sticking up for his wife as Chris Rock had made an unnecessary comment towards Jada Pinkett Smith’s shaved head, where it has clearly been a touchy topic for the woman who had to go through that.

The media has been giving Will Smith the backlash for sticking up with his wife, yet there’s not as much as talk about the comment that Chris Rock made. But apparently Chris Rock ‘had no idea’ that Mrs Smith had alopecia before making the joke at the Oscars. TMZ reports that he also mentioned he doesn’t have a mean bone in his body, meaning that the joke wasn’t intentionally to insult Mrs Smith.

Steve Harvey’s opinions on the situation

A lot of celebrities have been getting involved and talking on the situation, saying Will Smith is in the wrong for doing this. Such as Steve Harvey, who had a lot to say about the situation on The Morning Show, he mentioned that Chris Rock wouldn’t intentionally make a harsh joke towards Jada as he is not the type of person to do so. He continues to speak on the topic and said Will Smith overreacted at the moment and could have handled the situation differently. Steve Harvey believes that Will should have spoken to Chris Rock man to man after the Oscars and mentioned that making that joke about his wife was not acceptable.

Tony Rock, Chris Rock’s younger brother, was not happy with the incident that had happened at the Oscars, he rejected Will Smith’s apology on the internet and had thrown shade towards the couple at his latest comedy show at the PNC arena in Raleigh, North Carolina. Tony made it loud and clear on stage “If I say anything tonight, anybody got a f*ckin problem with” referring to the incident with his brother and Will, then he yells “this aint the motherf*cking Oscars” this all seems to have massively bothered Tony more than it bothers Chris Rock.

The public believes that Will Smith was taking his anger on Jada out on Chris due to Jada’s affair with August Alsina, as she had been having an ‘entanglement’ while still married to Will Smith. A lot of people believed Will should have left Jada a long time ago and that “Jada doesn’t love him” due to the entanglement she had with August, and that Will deserves better. Who knows, but from the incident that happened with Chris Rock, it shows Will Smith still truly cares for his wife, despite the affair she’s been having.

Did Will Smith resign from the Oscar’s?

Will Smith announced that he is resigning from the Academy ahead of decisions on his future with the Oscar’s after slapping Chris Rock. He mentioned that he is “heartbroken” from his actions at the 94th Academy presentation and that it was “shocking, painful & inexcusable” and that he wants to put the focus back on those who deserve the attention for their achievements.

What’s going to happen in Will Smith’s future?

Concerning Will’s future, apparently the actor’s talent agency has considered dropping him from their bookings following his Oscar’s outburst of violence. However, according to Mirror’s articles on the situation, Will Smith’s agency has denied they were thinking of giving him the boot after what happened between him and Chris Rock. Click here to read more.