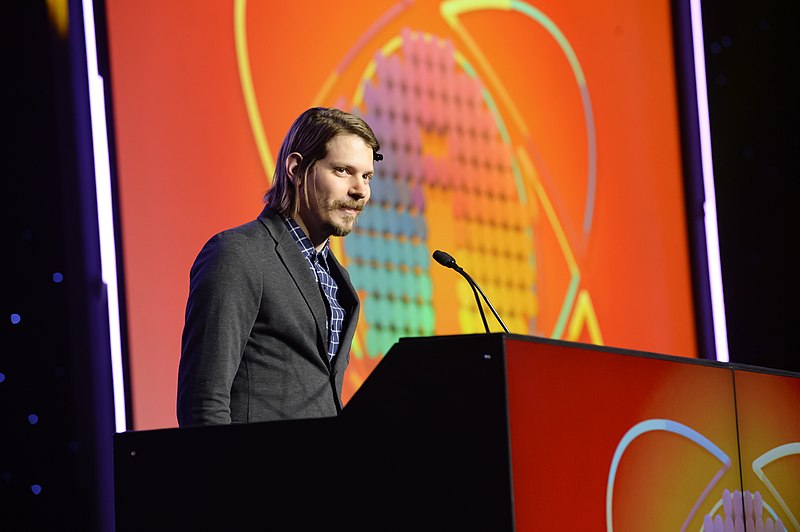 In gaming there are many names associated with artistry of the craft, Hideo Kojima, Hidetaka Miyazaki or Gabe Newell, to name a few. Just like auteur filmmakers, these game designers and directors are known for distinct style and thematic concerns which give them an almost author like status. However, criticisms railed against the concept of authorship often clashes with the huge teams behind triple A titles. There are also indie developers who spend years tirelessly working on a project that can either make or break them. This tension is most excellently presented in James Swirsky and Lisanne Pajot’s 2012 documentary Indie Game: The Movie.

However, there is one designer in the last few years who has proven his artistry with a consistently unique style, humour and gameplay, all while working with a small independent team, he is Lucas Pope. From muckraking for a state controlled newspaper, manning the border control for a dystopian power, to investigating a voyage of the damned, Pope’s games take us to worlds both mundane and fantastical. His games have won an assortment of awards at ceremonies big and small as well as being popular among players, if cinema has the auteur, perhaps games the ‘architecte’?

Pope’s early career began within the Quake community creating mods which eventually lead him to join the team on Triple-A titles such as the Uncharted series. After some success with his game Mightier, a collaboration with his wife Keiko Ishizaka, a puzzle game which worked with a printer and 2D drawings, the couple moved to Japan to pursue other projects. However, the beginning of the quintessential Pope style came in 2012 when developing Republia Times as an exercise for a competing game jam.

Republia Times’ short play-through is like an episode from Orwell’s 1984 where the objective is to judiciously select stories for a state-controlled newspaper, keeping the government happy and the truth hidden. The player makes choices about whether the truth or state ideology takes precedent, which leads to several avenues of story. If the player choses to create a revolutionary rag then the outcome becomes a brilliant satire on revolution and regime change. The game’s visual style and themes have a definite precursor to what is to come, with its low bit visual style and pressure on player to deftly align their morals compass.

Another game of Pope’s Unsolicited also began the convention of using documentation as tools, as under a time limit the player has to assemble junk mail to send to the correct recipients.  But perhaps the most famous of Lucas Pope’s games is the multi-award winning and hugely successful Papers Please. Papers Please takes some of the mechanics from the previous games to weave a fantastic conveyer belt of document management and ethical choice. In the pseudo-Soviet state of Arstotzka, the player has won a lottery for the position of border control guard. Every day, each person who comes to the border must have the correct papers and documents in order to pass through the gates. The premise sounds strange to most, even boring but it is anything but. With each passing day, the border develops changes, new documents, new sanctions and more pressures levied on the player as entrants plead for their lives or offer generous bribes. This moral compass is made difficult when having to consider making enough money to support a family, whose existence is threatened if you make a mistake and are given a fine. Papers Please is an incredibly unique game, from it’s thumping soviet inspired soundtrack, to the humorous dialogue in broken English, weaving a fabulously satirical narrative about serving a state or its people. It’s the game perfect for jobsworths.

Papers was a massive critical success with an array of nominations, even earning Pope an innovation award at SXSW gaming and a slew of BAFTA nominations, including a win for best strategy. It shows how mundanity and bureaucracy can become a difficult moral choice, and its simplicity and accessibility allows it plenty of replayability. As difficulty increases, players can find much enjoyment in the many pathways to be discovered from their choices. Reeling off the success of Papers Please, Pope’s next project would be the most ambitious of his independent developing career, taking players through the sea mist and ghostly harbours of the early 19th century in Return of the Obra Dinn.

The Return of the Obra Dinn is a masterpiece. It’s a game that had me on the edge of my seat with great gameplay and narrative design. The only problem with the game is the inability to play it again for the first time, so breath-taking is the story that it’s many dark twists stay etched into my mind. Described on Pope’s website as ‘An Insurance Adventure with Minimal Colour’, the Obra Dinn is a first person mystery game that attempts to discover the mystery of the merchant ship the Obra Dinn and the fate of its missing crew. The game takes its aesthetic and story from classic seafaring tales such as Mutiny on the Bounty and an atmospheric homage to Coleridge’s Rime of the Ancient Mariner. There are plenty of old-worldly references, perhaps ‘Dinn’ even taking influence from Kipling’s Gunga Din, maybe Stevenson’s Treasure Island is peppered in there too. The story also adds to this aesthetic, having the ship sail to the ‘orient’ and its subsequent audit undertaken by an East India Company insurance inspector. The atmosphere is aided by the game’s visuals which attempt to emulates old one-bit games found on the Macintosh +, creating a stark monochrome colour scheme. This makes for creepy surroundings, particularly when looking out at the dark and empty pixelated expanse of sea. The game consists of the player having a notebook, a photograph and a mysterious time travelling watch named the ‘Memento Mortem’. The goal is to work out the histories and fates of the crew, learning their identities and their connections to their shipmates. Finding a corpse and using the memento mori, the player is transported back to the scene kept in freeze-frame where listening to snippets of dialogue and exploring the action allows fates and identities to be revealed. The limited gameplay only heightens the mystery, as the player is forced to to create connections and use tools of deduction without having their hand held.

The cast of memorable characters in the Obra Dinn’s crew is not only reminiscent of Papers Please, but also be found germinating in Pope’s earlier games such as 6 Degrees of Sabotage with its milieu of archetypes from clockmaker, madame to colonel. 6 Degrees was Pope’s entry for the 23rd Ludlum Dare game jam which had developers create to a theme in 48 hours. With the theme of ‘tiny world’, Pope’s submission features these strange characters caught up in a bomb planting conspiracy. Through a series of images, the player must discern the connections between the conspirators, watching them stroll through a parade of civilians and eliminating the suspects before its too late. It’s a fun, short game which shows Pope’s style of a busy, often confusing frames in one of its first incarnations. But here, we also see the focus on memory, memory of people and their personalities that becomes the cornerstone of the Obra Dinn. There is no other game like the Obra Dinn and has proved an instant classic, even down to the fantastic accompanying strings in the soundtrack when the player discovers the identities of more crew members to move along the story. What is so striking is the feeling that the game is like an ‘experience’ that can really only be truly enjoyed once the mystery is deciphered and the story unfolds. There is definitely a replayable factor, but depending on your memory, perhaps it takes some years to pick it up again.

Currently Pope, who lives with his family in Japan, is working to develop a new game for the handheld console Playdate. Entitled Mars After Midnight which Pope describes on his development log as a ‘Papers Please-lite’ but has also suggested the final outcome is open ended, the last update was almost a year ago.  It will be interesting to see how Pope works with the 1-bit software with his hand-drawn Martian characters, I am eager to play the results.

If you have yet to play a game by Lucas Pope, a good place to start would undoubtedly be Papers Please but if interested in any of the other titles mentioned you can either play or purchase from Pope’s website. Take the time to enjoy the rich but simple worlds created by one of the most exciting architects in gaming right now.