An Outside Perspective on Star Wars 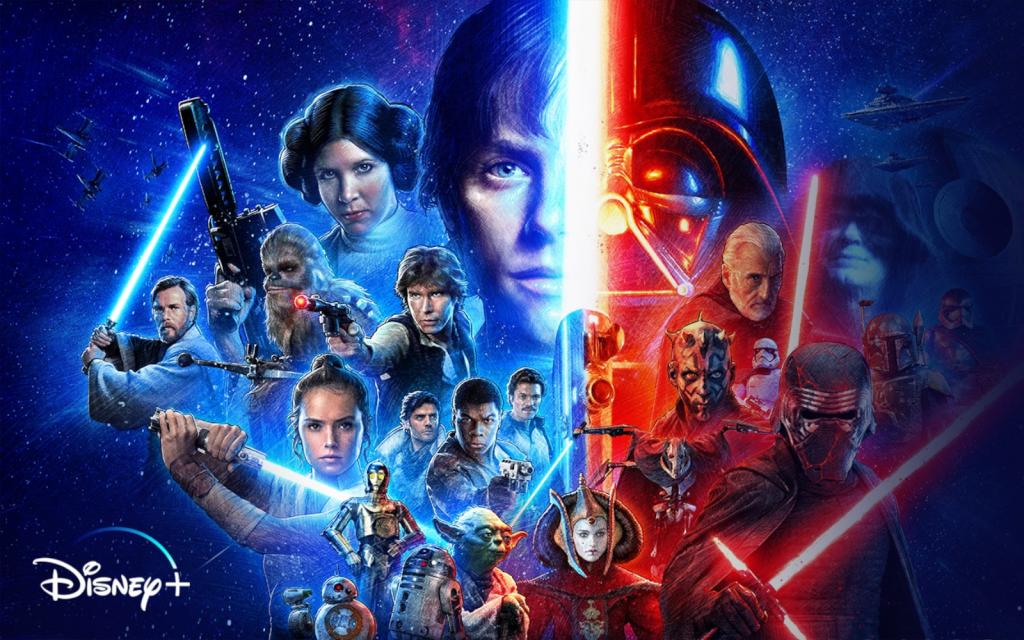 Star Wars is another pop culture monolith I’ve never gelled with. My exposure to the franchise remains limited to prequels reruns and a half-hearted The Force Awakens viewing. Neither inspired me to pay the series much mind. It can be hard to look at these movies detachedly; I’m wondering how much love held for the series is tied up in childhood wonder, not in the quality of the nine films I’m about to watch.

A New Hope is not the film it’s revered as. Nor is it at fault for everything that was added afterwards. The world presented is fun – playful sequences in the first act especially. Despite a lack of context (the ‘iconic’ opening crawl endeavours only to establish much-needed background), the sets, models and special effects are distinct.

It abides by Joseph Campbell’s The Hero with a Thousand Faces (a very dated reading of folk tales) step-by-step. Innocent, perhaps, but a matter of perspective. It’s 1977, and this world in which good and evil are obvious feels in direct response to the recently-concluded Vietnam War. An unsophisticated dichotomy of hero and villain, resistance and empire, follows. While I can’t connect with a hand-me-down, a discrepancy sits between something uninteresting and something bad. A New Hope is a sci-fi imitation of Arthurian folklore. You’re on board with that or you aren’t.

The Empire Strikes Back contains some wild advancements. Lucas stepping back from writing and directing means his bizarre flourishes are better served in a functional film. Luke lands as a character, from the monomyth ‘born hero’ to someone working to live up to his family name. Still redolent of Campbell, but the professionalism from new voices hides it well.

A stranger tone, tighter scripting and characters, contrast A New Hope’s folksy spiritualism. It’s another example of these films coming from a different context than their present deification, and why the sprawling “Skywalker Saga” elicits only an eye-roll from me. This trilogy was never the foundation for a franchised universe. I’m liking them more than expected, but it’s exhausting to disassociate them from everything asserted retroactively.

Lucas’ idiosyncrasies often vary in palatability. The pace and tone of the first act are fun. The Ewoks are not. Sinking back on the Thousand Faces crutch, Jedi returns to Yoda only to kill him off in a symbolic ‘passing of the torch’ – but Luke’s previous arc, his departure from the mistakes of the past, renders it moot. Furthermore, the Force Ghosts undercut any sacrifice a Jedi could make. You can always return to give the new protagonist some emotional impetus.

Why is it important to resist the Empire, aside from their Nazi-coding? Could we not have visited a planet under threat from them, showing their violent imperialism? Introducing the Emperor, whilst giving Luke’s monomyth status a final test, does nothing to bolster them beyond the ‘evil’ status quo established in A New Hope. “Hate” and “aggressive feelings” being the biggest threats to the galaxy is meaningless, and makes the Jedi useless as a peacekeeping force. Pacifistic heroes don’t exist – there can’t always be a Vader-figure to do the dirty work. The Thousand Faces dichotomy is unengaging. It hinders any satisfaction I should’ve felt from this conclusion.

Sixteen years since the previous instalment, it’s fair to assume the prequels would recognise the originals’ limitations. Portraying the Jedi as functionally-useless is commendable. The Phantom Menace refused to rely solely on pre-established material.

It didn’t work. It’s so, so bad; Jar Jar is only funny because the film is so confident in him; Anakin’s an immaculate conception, because space-Hitler is also space-Jesus; Liam Neeson is the only actor giving a decent performance. The offbeat stylings of A New Hope have mainlined some black-market steroid, and the discordance is unwatchable. Prior movies worked to varying extents because Lucas took the role of overseer, not overlord. The only thing more incredible than the film itself is found in a behind-the-scenes documentary, where – after viewing a rough cut – dumbfounded production members deconstruct their movie. Lucas says, “I may have gone too far in a few places”. I don’t know why they’d allow that to be released.

And what’s with all the racist stereotypes?

Although Attack of the Clones learns from Menace, it makes its own mistakes – it would be nice if Hayden Christensen had more than one mode of delivery. The CGI was ground-breaking for the time, but not anymore. Yoda, in all his wizened reproach, doesn’t track with his first appearance. It’s hard to see him and Kenobi as the same characters from the originals, their stories entwined with Luke’s. The original portrayal of the Jedi as quasi-unknowable warriors is, albeit intentionally, conflicted with how ineffectual they are now.

The Star Wars films are an example of execution over ideas. The originals, whilst lacking in nuance, were distinctive in their presentations. Simplicity didn’t matter, because of the aesthetic and emotional confidence. The prequels, with their adherence to substantiating the world through political corruption and bureaucracy, are bloated and graceless. Bold antithesis of the originals, stilted writing kills what are attempting to be more grounded films.

This movie goes to great lengths to make the Jedi into dogmatic moralisers. What morals do they fight for, though, other than ‘goodness’? Joseph Campbell’s reductive reading of fairy tales is still doing the heavy lifting, but the story needs to stand by itself. The Republic reforms into the Empire; after six films, the villains from the first movie are developed.

The prequels were intent on making the Jedi seem doomed to valiant failure. Revenge aims to redefine Star Wars as more brutal, but Lucas’ writing – consistent only in its sloppiness – can’t deliver.  Making your heroes an unserviceable arm of a broken political system is nowhere within his grasp. It’s wooden and emotionally-uninspiring. Anakin is less threatening than he is overly-emotional. Despite planning the prequels as far back as the 1970s, it’s impossible to appreciate Lucas’ intended story here. Dead-ends and irrelevant details received more attention than the fundamentals.

The Force Awakens is stylish. Wholly un-eccentric, but the CGI, sets and practical effects are impressive. It’s fast-paced, hitting the emotional beats it desires and skipping necessary story beats. Kylo Ren being a temperamental kid would be inventive, if Anakin hadn’t been just that. Inextricably linked to Campbell, we have an imitation of A New Hope – take that as history repeating itself or J.J. Abrams remaining on safe ground. Star Wars for a new generation, regardless. Any developments are within the remit of the franchise already; Lucas said in 2015, “they wanted to do a retro movie. I don’t like that”.

There are myriad things I would rather write about than this film. There were plenty of hardcore fans enraged by the prominent castings of Daisy Ridley and John Boyega. If a diverse main cast is what breaks your suspension of disbelief in the space-fairy-tale franchise, that says more about you than it does about Hollywood.

This is a fine, if awkward, movie. Leaving Joseph Campbell at the door, characters and worldbuilding become emotional and not functional. Overlong and offbeat, it veers from ‘your mother’ jokes to Luke’s disillusionment within the first hour. A $200 million budget and they couldn’t afford a decent script editor?

Johnson deconstructs the ‘good and evil’ storytelling, important bloodlines and valiant battles. The only thing I’ve wanted from the preceding six films is an element of self-reflection so, given the prequel’s comprehensive failure, The Last Jedi should be something for me. Compared with The Force Awakens, however, it’s incoherent. This film goes to great lengths to erase every previously-established story thread. The lack of Lucas-style oversight means two contradictory voices are at war. Previous trilogies had uniformity as to how they approached these foundations. This isn’t Strikes Back sharpening the storytelling of Hope, it’s multi-million-dollar movies lacking creative consistency. Make for good viewing, it does not.

I feel less spiritual as a result of watching this movie. The only thing more egregious than Johnson fighting J.J., is J.J. firing back. Despite being one of the most expensive films ever, or because of that, The Rise of Skywalker does nothing to earn its own existence. Like a Marvel movie, soulless and frenetic, only references and cameos to sustain it. Palpatine’s return signifies a withdrawal to hallowed ground. Nostalgia parcelled as development, so overblown and despotic that it becomes ineffable – like making direct eye contact with God. The status-quo reversal of The Last Jedi is vindictively re-reversed; ‘Star Wars is too simplistic, but fully formed back in the 1980s’. A writer’s room row, spat out for audiences to scratch their heads over. In the hands of Disney and franchise-juggernaut J.J. Abrams, was it going to be any different?

Star Wars could never be good long enough for me to enjoy it. It’s a monolith, and you can’t expect a monolith to love you back. The Rise of Skywalker is what happens when you demand one to. I find myself yearning for McGregor and Christensen prancing about on a lava planet. At least the prequels, though abysmal, stuck it out. George Lucas wasn’t very good at making Star Wars. Neither, it seems, is anyone else. In Ghosts of My Life, Mark Fisher writes “culture has lost the ability to grasp and articulate the present.” Star Wars can’t view itself outside of the 1980s, instead it calls back to previous eras. Pop culture is now unable to exist in itself, as if we’ve lost our collective ability to dream.