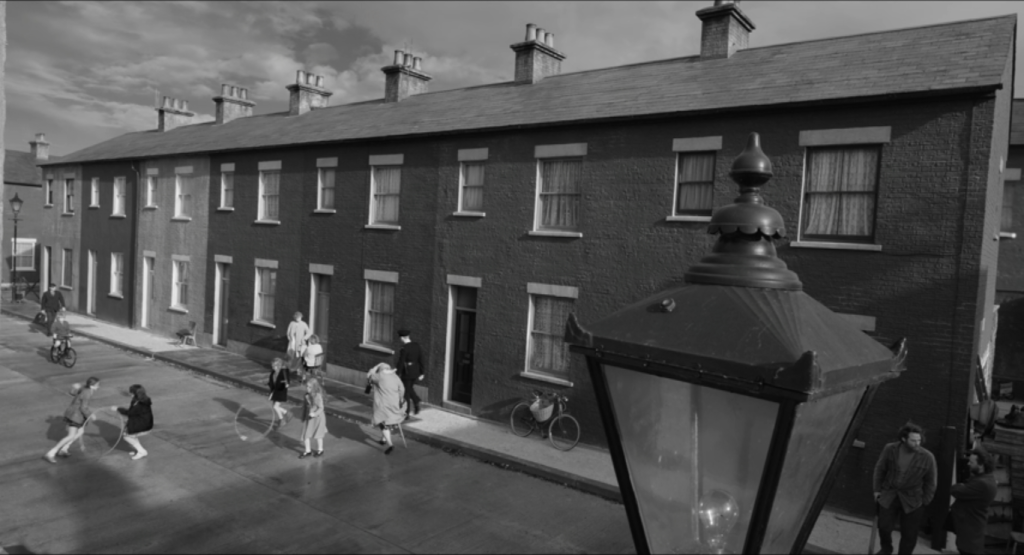 Belfast is Kenneth Branagh’s first ‘real’ film, after a slew of Shakespeare and Agatha Christie adaptations – as well as that 2020 Artemis Fowl movie. Belfast was nominated for seven Academy Awards this year, and won Best Original Screenplay. Winning an Oscar has never been an indication of quality but, when compared to his work on Thor (2011), it’s easy to see why.

The best thing about this coming-of-age historical comedy-drama, set in 1969 at the onset of The Troubles, is the history happening in the background. The most notable aspect of the filmmaking is the mania of the few action sequences, and the visual Western references are distinct-if-unoriginal. The imagery of a street having to build barricades around their homes is shocking. That’s a piece of history, however, and not a triumph of filmmaking. Knowing that the religious ethno-conflict will continue like this for the next thirty years is a more engaging story than the one in the foreground, which is ‘concerned’ with Buddy’s family’s choice whether to leave Ireland for England. These two elements don’t intersect at any point, making the film strangely weightless. That weightlessness of the story means it appear as the Cliff Notes version of something that could’ve been a romantic imagining of 1960s Northern Ireland. This ‘Best Original Screenplay’ feels like a first draft.

What holds the film together is the emotional candidness. Branagh declared Belfast as his most personal film, which isn’t a particular feat considering he’s known for literature adaptations and basically terrible movies. Somewhat based on his real life, the consistent energy to which Branagh approaches the setting and subject matter is unmistakable. Don’t mistake candidness for being effective, as the film, for the most part, makes the cardinal sin of being uninteresting. Its playful nature and stark rendition of the setting evaporates after the first act.

I was open to the idea of the film being black and white in the beginning, but the blunt nature of the opening is quickly lost. After a manic action-packed introduction, in which Protestant loyalists attack Buddy’s street with rocks and Molotov cocktails, an idyllic vision of childhood is shattered. The notion that the film will be about anything is also shattered – considering it began life back in March 2020, it feels like one of the myriad films released over the pandemic with an intensely rough production period.

Because it’s a modern neorealist film, purposefully in black and white, it wouldn’t be complete without some random flashes of colour. During a theatre viewing of A Christmas Carol and a cinema viewing of Chitty Chitty Bang Bang we see, through Buddy’s eyes, a world of colour. It would have impact if Buddy had dreams of being an actor or filmmaker or the like, but it feels as though the creative decision was made without real understanding of what it should signify for the characters. Childhood wonder? Escape? It’s hard to say.

I’ve never paid attention to the Academy Awards. Especially since the pandemic, it’s fair to argue that the main winners are more often than not films gesturing towards depth, as opposed to films – such as Parasite or The Shape of Water – which actually contain depths to explore. Belfast just ends, with a close up of Judi Dench’s face. It’s a choppy, insubstantial film with little to say for itself from the point of view of anyone other than the director. Viewing war and civil unrest through the eyes of a child can be effective, and a similar conceit was better achieved in the Channel 4 comedy-drama Derry Girls, but the film isn’t very interested in that anyway. It doesn’t have much to say, nor is there much to say about it. Five stars, Best Original Screenplay.