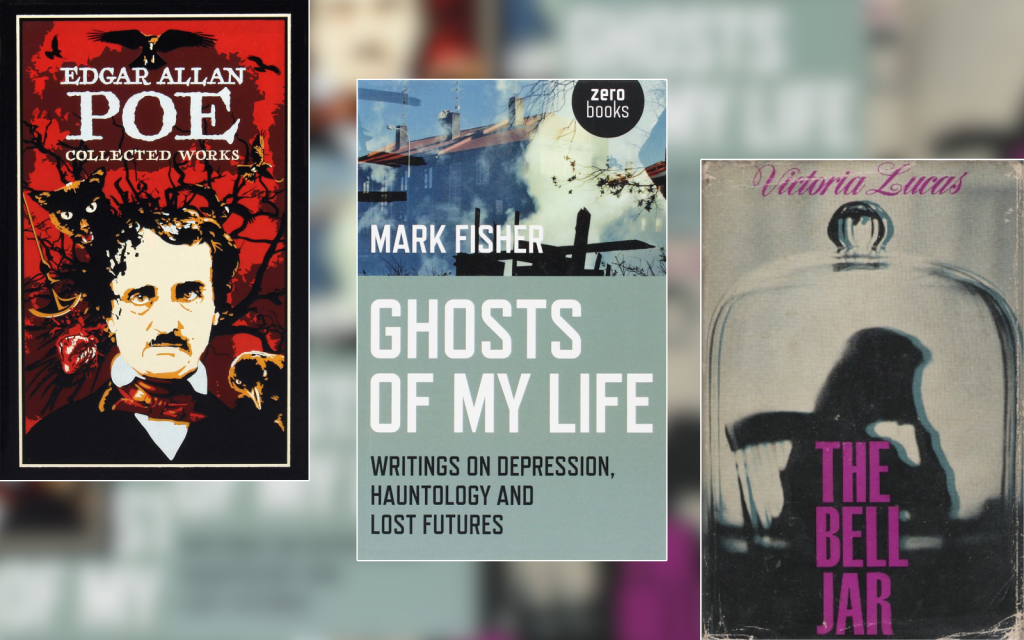 In his 2020 analysis of Disco Elysium, the critic Noah Gervais notes that depression feels like “a mixtape of misery, each song carefully chosen and arranged by you, for you, for maximum effect”. He elaborates, though, by saying “everyone’s depression feels deeply personal… but the basic shape of it is oddly uniform. It’s why you can feel like the only person in the world who feels like you feel but when you go in to see a therapist, they’ve already printed out a checklist with most of those feelings arranged in rows.” Sometimes the best short-term medicine is catharsis. To know that you are not alone in how you feel can, in the moment, save your life. Here are some books that might contribute to that – they’re not diagnostic books, or self-help books, but fiction and non-fiction writings that may help verbalise how you feel.

Sylvia Plath’s only novel, The Bell Jar, was published (under the name Victoria Lucas) in the UK only a month before her suicide. It’s considered semi-autobiographical, or a roman à clef (a fictional work with real-life events intertwined), and it documents Esther Greenwood’s slide into deep depression. The book doesn’t feel that way at first. There’s a bait-and-switch halfway through, in which Esther’s wry analysis of the world around her descends into institutionalisation and apathy. Whereas once she could describe the clothing and furniture of her fancy hotel room in deep detail, soon she can only explain her desire for annihilation with a similar depth of vision and language. Her wit quickly malforms into a blank and unfeeling suicidality.

“To the person in the bell jar, blank and stopped as a dead baby, the world itself is a bad dream.”

The refrain of a ‘bell jar’ is a description of Plath’s suffocating depression, or perhaps a bipolar disorder. To me it could be read as a dissociative state, too. But the analogy of the bell jar is universal. Plath’s ultimate fate might not be very inspiring, but Esther’s fate is tinged with a confidence and hope that can somewhat counteract it.

A poet, novelist, and critic, Edgar Allen Poe helped form the short story and the detective genre. Poe’s father abandoned the family a year after his birth, and his mother died a year after. Poe failed a military career, dropped out of university due to a lack of funds, and struggled with alcoholism until his mysterious death at the age of 40.

“I have absolutely no pleasure in the stimulants in which I sometimes so madly indulge. It has not been in the pursuit of pleasure that I have periled life and reputation and reason. It has been the desperate attempt to escape from torturing memories, from a sense of insupportable loneliness and a dread of some strange impending doom.”

Edgar Allen Poe doesn’t make people feel very good. His poetry plays with a sense of almost-natural longing, a deep and innate feeling of being an interloper and a stranger in a world filled with strange mysteries and endless losses. An unused couplet in relation to the poem “Eulalie” reads “Deep in earth my love is lying/And I must weep alone” – both were written the same year that Poe’s wife, Virginia, died of tuberculosis. He is perhaps the most evocative writer on feelings of loneliness and depression. Poe gives those emotions and states of being an outlet, a deep sense of catharsis that other works tend to fumble with wordiness and allegory.

Mark Fisher is known more as a cultural critic and philosopher, but throughout his works there is an irrevocable understanding of hopelessness and depression. His book Ghosts of My Life (2014) weaves a cultural critique that “the present has given up on the future” whilst also writing about his life-long struggle against depression, “the most dogged spectre of [his] life”. Fisher wrote about a society that suffers from melancholia and depression, an aversion to the present and a stealing of the future, much alike his personal experience with mental illness.

“Instead of treating it as incumbent on individuals to resolve their own psychological distress, instead, that is, of accepting the vast privatization of stress that has taken place over the last thirty years, we need to ask: how has it become acceptable that so many people, and especially so many young people, are ill?”

Up until his suicide in 2017, Mark Fisher maintained that depression is not a personal failing, but a political one. The driving factors of mental illness are stress and isolation which, coupled with the unavailability of mental health services – or those services’ tendency to help people only up to the point they can re-join the workforce – paints an argument in which there is no-one to blame for mental suffering but our leaders. There is less catharsis derived in reading Fisher, but it is an intense and energising experience. The only people capable of making sure our collective mental suffering becomes eased is ourselves, and we all need to be around to ensure that happens sooner rather than later.