You’ve probably heard of catfishing, but have you heard of blackfishing?

Blackfishing is a term that came to light, in 2018, because of journalist Wanna Thompson. She picked up on the fact that many white celebrities and influencers were imitating black women. Essentially, blackfishing is when a white person has intentionally done things to make themselves appear black / mixed-race. Examples of this could be excessive tanning to achieve a darker complexion or wearing hairstyles that have predominantly stemmed from POC (people of colour). Men can also be guilty of blackfishing, but it mainly seems to be white women who are the big culprits when it comes to this.

Just to get things straight, there is not necessarily anything wrong with taking an interest in other cultures. The problem is when people do not acknowledge the heritage behind what they are doing, or when they profit from a culture that isn’t inherently their own. Seeing Caucasian women profiting from these features or being praised for things that aren’t natural to them is devastating to see. Especially as many black women are villainised for their features or put down for their skin complexion.

As a black woman myself, blackfishing is something that I think should be addressed more. Recently I was reminded when I came across a white woman who had excessively tanned, to the point she had a complexion similar to a black woman. I don’t necessarily have a problem with people tanning their skin, but tanning to the point you look racially ambiguous or a gazillion shades darker is problematic.

It made me angry, knowing she wouldn’t experience racism, as she has clear Caucasian facial features and blonde hair. However, a black woman with the same complexion would be more likely to experience harmful comments in regards to her skin tone. People who blackfish essentially can handpick the elements they want, such as big lips or a kinky hair texture. But they do not have to experience the (potential) racism that comes from actually being black.

One of the issues with blackfishing is that some brands use models guilty of this and it makes the brand seem diverse. The reality being that it is a Caucasian woman essentially doing blackface. They can claim diversity without actually using POC to promote their products. These models take away opportunities that should be for POC. A clear perpetrator of this is a 22-year-old model from Sweden, Emma Hallberg. She has had paid partnerships with well-known brands. She is notoriously guilty of blackfishing, many people have no idea that she is in fact white due to how far she’s gone. If you didn’t know any better you would think she had some black heritage in her family.

However, she claims she naturally has a deep tan and denies accusations. Unfortunately many brands bat an eyelid and are only bothered about if the model looks good and can sell their clothes.

Here is a list of other influencers and celebrities who have been accused of blackfishing:

Admittedly I love Ariana’s music and there’s no denying that she is extremely talented. However, she has been called out for blackfishing during her career and has been guilty of this. Back in 2016 she was under fire and accused of blackfishing due to her VMA performance alongside Nicki Minaj. People were quick to point out that Ariana had a complexion similar to Nicki’s. Although admittedly in recent years she has toned down her tanning and reverted back to a look more natural (to her background). So people thought…

In December 2021, Ariana Grande released a photoshoot, channelling a new look. However, she was met with accusations that she was over trying to look black and now trying to look Korean. The likelihood being that she is interested in Asian beauty and it may have been wanted to try it. It’s always going to be tough to tell if some people are simply taking influence or trying to come across as being racially ambiguous. Although that’s a matter for another time, Asianfishing, we won’t get into that right now.

After she released her debut single with Nicki Minaj, after leaving Little Mix, there was a lot to be unpacked. Unfortunately, the music video highlighted Nelson being the latest figure to be under fire for blackfishing. With her channelling a darker complexion and mannerisms associated with black culture.

More heat was added to the fire after Nelson stepped out in this jacket. 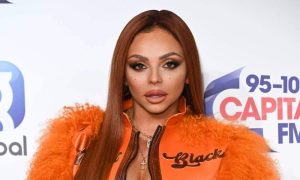 Unfortunately, her hair was covering part of the jacket, meaning the focus was on the fact it had ‘black’ written on it. Many felt she was making light of the blackfishing allegations, safe to say people were not impressed.

Over the years the Kardashian klan has been accused of appropriating black culture. Several of them have been accused of blackfishing, especially Kim Kardashian who has been called out for continuing to wear black hairstyles. Not to mention, for the surgery they have undergone on their bodies. An example of this is Kylie Jenner getting lip fillers to achieve bigger lips. The problem is that due to their clear influence, when their followers copy them they will give credit back to the Kardashians instead of POC for creating these trends. Furthermore, what’s upsetting is that the response from the public for the most part is positive. Although many people may feel hurt from their actions, there are never any repercussions for the people profiting off black culture. The only gain appears to be monetary with sponsorships and partnerships from brands. Essentially this shows that people do want black culture represented, but are fine with caucasian women being the representation.

I believe it is important to appreciate and understand other people’s heritage. However, when people start to claim it for themselves without acknowledging where it derived from, that’s when it is wrong.

Were you aware of blackfishing? How do you feel about it?