This year’s NBA playoffs mark the 75th annual off-season for the NBA, marking the league’s diamond jubilee. This historic off-season already has shown great drama and passion through the first round and the start of the conference semis. From what we have seen of this year’s playoffs while not having many upsets has been more than captivating.

The Brooklyn Nets scraped their way through to the playoffs as the 7th seed, to play the Boston Celtics in round 1. Even with future hall of famers, Kyrie Irving and Kevin Durant, they couldn’t get a foothold in the series and ultimately got swept 4-0 in the opening series. This result is so surprising knowing that they were one of the favourites to win the NBA, and they could not even get a win against the young and talented Celtics team. Jaysun Tatum and Jaylen Brown showed their class and pushed their team to get the 4-0 sweep.

The Atlanta Hawks just got through the play-in tournament with the 8th seed to face the number 1 seed Miami Heat. Unsurprisingly the Heat eased past Trae Young and his Hawks. Duncan Robinson went berserk in game 1 scoring 9/10 from behind the 3pt line, but hardly showed up later in the series; truly showing the Heat’s immense team depth. The Hawks did get one game but eventually lost the series 4-1 allowing Jimmy Butler and the Heat to progress.

The reigning champion Milwaukee Bucks brushed past the 6th seed Bulls to a 4-1 series win. Although the series was not very evenly matched, the individual games were very close, DeMar DeRozan and Zach Lavine put on outstanding performances, but ultimately could not overcome the strength of Giannis Antetokounmpo’s team. Beating the Bulls advanced the Bucks to play the Boston Celtics in the conference semi-finals.

Joel Embiid and James Harden’s 76ers matched up with the Toronto Raptors for their first playoff series of the year. While matching up evenly, the Raptors just could not contain the MVP calibre talent of Embiid. While not having a perfect performance across the series, he averaged 26.2 points, 11.3 rebounds and 2.3 assists, preventing the very good and talent-rich Raptors from progressing to the next round. The 76ers moved on to the semis to face Jimmy Butler and his Miami Heat.

The Phoenix Suns finished the regular season with the best record in the NBA with 64 wins to 18 losses. They matched up in the first round with the disappointing New Orleans Pelicans who have been missing their star player, Zion Williamson, for well over a year. While not appearing in the series he was seen dunking and doing very intense moves on the court at half time during one of their games. All the pundits covering the match got very heated about him doing this while being injured and rightly so. Zion is one of the promising and freakishly athletic prospects in basketball history, and while having played for many years, hasn’t really lived up to his potential. So, seeing an “injured” star prospect like Zion dunking and doing very advanced moves was sure to leave a bad taste in many people and analysts’ mouths. The Suns eased past the weakened Pelicans to secure their place in the conference semis.

MVP contender Nikola Jokic and his average Nuggets faced Steph Curry’s Golden State Warriors in their opening series in the playoffs. While not impossible it would have been very hard, even for Jokic, to get past a team like the Warriors. Despite Nikola “the joker” Jokic averaging an amazing 31 points, 13.2 rebounds and 5.8 assists, his Nuggets could not hold down the opposition. Although Jokic put on a clinic every match, his Denver Nuggets just did not have the strength to hold Steve Kerr and his Warriors. They went on to beat the Nuggets 4-1 to move to the semi-finals.

Luka Doncic and his Dallas Mavericks came up against a quite evenly matched Utah Jazz in their first round series. Both teams, while quite evenly matched, had some differences, Dallas built their team and how they play around their star Doncic. Allowing him to have the ball most of the game and calling the shots, leading the team scoring when he needs to score and passing off when it’s right to do so. While the Jazz have their own stars in Donovan Mitchell and Rudy Gobert, they just could not compete enough with the very well drilled Mavericks team. Managed by the NBA legend Tyson Kidd, Doncic and his team managed to brush off the Jazz winning 4-2 over the series. 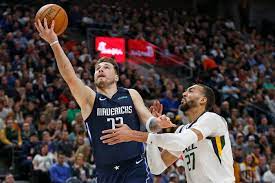 On paper, the matchup between the Minnesota Timberwolves and the Memphis Grizzlies seemed to be the most even across the board. While both teams had stars like Ja Morant and Karl Anthony-Towns, the Grizzlies managed to get past the wolves in 6 games winning the series 4-2. While absolutely no way near as unexpected as the nets being sent home in the first round, this wasn’t expected from anyone really. In game 1 there was also an NBA record set, it was the first playoff game ever to have 2 players below 22 score 30+ in the same game. Memphis’ Ja Morant (aged 22) scored 32 in game 1 while Anthony Edwards (aged 20) scored 36. The Timberwolves won game 1 but couldn’t unfortunately get hold of the series. Getting sent home losing 4-2 allowing the Grizzlies to progress to face the Warriors.

The Warriors went to Memphis to start their semi-final series versus the Grizzlies. While putting on another star-studded performance from Ja Morant he scored 34, rebounded 9, and got 10 assists. Putting him 1 rebound off getting a playoff triple double, the Warriors showed their class as they won the game by a single point, ending 117-116. Giving the Warriors the lead, but despite winning game 1 the Grizzlies came out fighting and Morant again went off scoring 47 points, 8 rebounds and 8 assists tying up the series 1-1, and showing us how talented Ja Morant really is. The Warriors have their hands full in this series and will struggle to get past this Memphis team.

The Celtics welcomed the Bucks for their semi-final series and to no one’s real surprise lost game 1 at home. Giannis had an amazing all-round performance getting a triple double for his troubles. He scored 24, rebounded 13, and assisted 12, leading his team to their game 1 victory. Surprisingly Boston managed to take home game 2 to tie the series 1 a piece setting up a great series to come. Jaysun Tatum scored 29 and Jalen Brown scored 30 helping the Celts get their win vs the reigning NBA champions. While the series is evenly poised, I honestly couldn’t see Boston beating the Bucks, but weirder things have happened so nothing is off the table.

The Miami Heat welcomed Joel Embiid’s Philadelphia 76ers to start their semi-final series, but with Embiid sidelined for game 1, the Heat strolled to victory on their home turf. While the 76ers do have a great roster without Embiid they lack the height and physicality needed to get to the NBA finals. While Tobias Harris scored 27 in game 1, the rest of the team couldn’t score enough to make a difference letting the Heat cruise to a 106 to 92 win to lead the series 1 to nothing. Philadelphia needs Embiid back to compete with the Heat let alone win the NBA, but nothing is impossible.

Luka Doncic and his Dallas Mavericks faced the best team in the regular season, the Phoenix Suns in their conference semi-final series. While the Mavs really fought and showed great heart for most of the first game, the team was just outclassed by the more well-rounded Suns. While Luka even at his young age is one of the best players on the planet, he could not drag the subpar Mavs to beat Chris Paul and his Suns. While Doncic is a favourite of mine, I’d be stupid to neglect the fact his team is not as good as the other big teams in the league. Meaning this year and until they fully build a better team Luka might not make it to the conference finals let alone the NBA finals. Not losing game 1 will make it harder for the Mavericks to knock off such an opponent and progress.

While only just starting the semi-final round of the playoffs we have seen so many brilliant plays and manoeuvres and haven’t even got to the conference finals yet. Meaning the action can only get better.