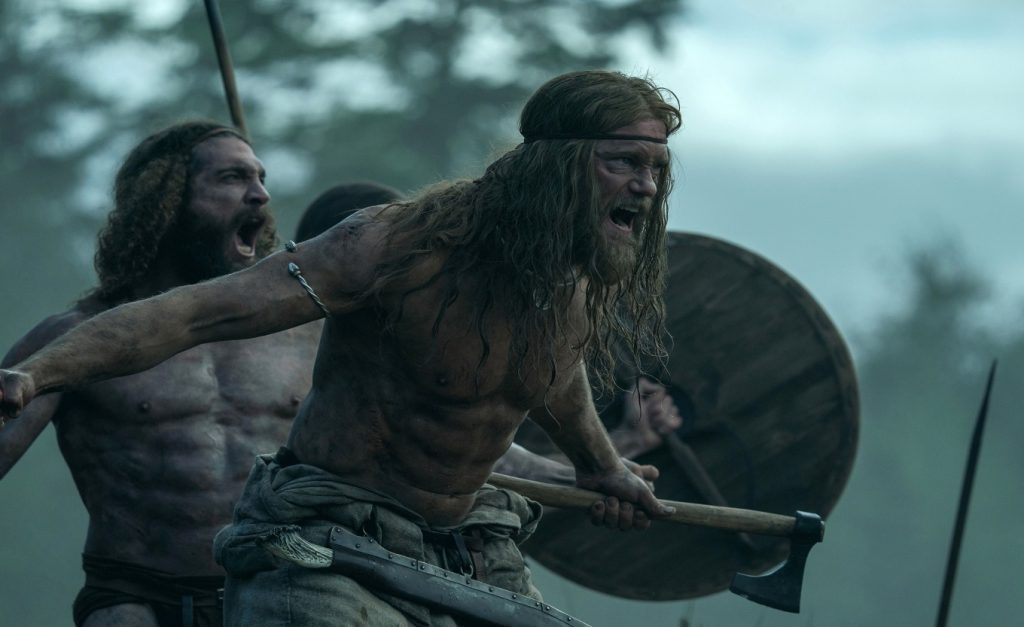 Vikings have always been in the imagination of the movies, from memorable eye-gouging, camp action in 1958’s The Vikings to the bloody, hallucinogenic Valhalla Rising (2009). The Nordic raiders are often an opportunity for big action played with macho chops. The desire to slash, bash and pillage like his ancestors has been a fascination for actor Alexander Skarsgård who had been trying to get a Viking project off the ground for some years. It wasn’t until meeting director Robert Eggers whose career has skyrocketed on the back of his historical nasties The Witch (2015) and brilliantly unique The Lighthouse (2019), that this dream became a reality. With a screenplay written by Eggers and Icelandic writer Sjón, The Northman brings the dark ages to the big screen in a memorably epic romp while also leaving audiences with a rather tepid horn of mead.

After a series of successful raids king Aurvandill (Ethan Hawke) returns to his kingdom, met with a great feast, his wide-eyed princeling son Amleth (Oscar Novak) and cold, magisterial queen Gudrún (Nicole Kidman).  Ruling the kingdom through barbarity seems fine enough until typically outshined crow-like brother Fjölnir (Claes Bang) gets other ideas. After murdering Aurvandill and taking Gudrún for his own, inconvenient heir Amleth is forced to flee his home with a mantra of revenge: “I will save you mother, I will kill you Fjölnir, I will avenge you father.” Years have passed and the small cub has now become Amleth the ferocious timbre wolf (Alexander Skarsgård) stacked with strength, orphan rage and an unmatched skill with weapons. Joining a group of raiders along the river Rus, taking captives and treasure, Amleth, upon discovering the location of his hated uncle, disguises himself as a slave to be sold to the remnants of his kingdom. With the aid of fellow enslaved sorceress Olga (Anya Taylor Joy), Amleth proves himself a valuable servant to his uncle’s decrepit fief as he slowly prepares for a bloody family reunion. While The Northman seems on the surface a conventional sword and sandal revenge flick, Eggers’ film takes many exciting twists and turns from a wealth of sources. With the 13th century legend of Amleth being a potential inspiration of Hamlet, melding with other bardic influences and cherry picked episodes from the greatest of Viking sagas, The Northman has plenty to chew on.

Skarsgård and Kidman have excellent chemistry, the kind only a Shakespearian mother and son relationship can deliver. Their passionate exchanges contain the embers from their fiery dynamic in HBO’s brilliant Big Little Lies. While leading lady Anya Taylor Joy delivers a rather unremarkable, if not mildly cartoonish, performance. However her doe-like eyes that, in a moment’s notice, flicker with vengeful wrath are certainly worth noting. While Ethan Hawke plays the faux-noble, warrior king with enough weight as we need to carry for the set-up, rising star Claes Bang makes for an excellent villain. Fjölnir has the makings of a typical nemesis, a ruthless tyrant with unnatural strength and the single fount of Amleth’s reign of vengeance; but through varying twists is played with enough sympathetic nuances to have the audience pondering if they’ve backed the right horse. I recall first seeing Bang in Ruben Östlund’s Palme D’or winning The Square where he excels in the passive aggressive, unapologetically liberal and narcissistic lead. Now with his break out as the eponymous lead in BBC’s Dracula, it seems there is great range to this great Dane. The supporting cast also provides colourful threads into this tapestry-like saga. Willem DeFoe as the Fool does his Willem DeFoe thing, similarly to Eggers’ The Lighthouse and last year’s Nightmare Alley with wordy soliloquies and a manic energy befitting Lear’s Fool. Other creepy accessories come from supernatural seeress Bjork in some of the film’s finest costuming, and Gustav Lindh who plays nasty twerp exceptionally well.

While this isn’t quite the heart-pounding revenge epic that perhaps was promised, some of the film’s action set pieces are spectacular. The raid on the Rus village in the first act is breathtaking with a real visceral splash of mud and blood deftly achieved in a seamless single take. It seemed as if history was unfurling in front of me from the amazingly crafted stronghold set design, crunchy violence and a raw depiction of Viking brutality with a knowing nod to Elim Klimov‘s 1985 masterpiece Come and See. The stunts in The Northman are gloriously imagined and Skarsgård has ample time to showcase his physicality and impressive physique. Skull smashing, high jumps and agile sword fighting are among some of the stunning feats that force you to sit up and squirm. The action works in tandem with imagery from Viking mythology such as in one memorable sequence where Amleth duels with a sword-guarding draugr and takes a truly transcendent ride of a Valkyrie. It is a film that demands to be seen on the biggest screen possible, Eggers shows dedication to details and the camera slides along as if reading a woven scroll. Frames of the wild Irish countryside are wide and epic to reveal the expansive sparseness of the dark ages and its untamable beauty along with its great dangers of raging seas and thunderous volcanoes.  Frequent Eggers collaborator Jarin Blaschke does an excellent job of making the colours of the morning, natural greens from vegetation and grey from clouds look lifelike and time bending. Kudos must also be given to the fantastic lighting from burning torches that takes us back to our primitive past. The opening banquet sequence casts wonderful shadows and a warming atmosphere against the darkened world outside.

Despite much to be admired with The Northman, unfortunately I did find myself rather tired of it. Its plodding second act made me feel, dare I say, bored. While Eggers turns the vengeance theme and its conventions on its head, the time it takes to get to the payoff doesn’t feel satisfying and left me a little cold. Frankly, I didn’t care about anybody. I found the relationship between Skarsgård and Taylor-Joy, while fun in moments reminiscent of a spy film, dull and passionless in moments of intimacy. It can be difficult to relate to blood thirsty pagans in the best of times, but through all the struggles, tribulations and godly interventions, I still didn’t feel the stakes were high enough. What is life when life is so easily taken away? The moments I admired most, were when Eggers relished in Viking mythology and its cosmic scale but these are almost overshadowed by Skarsgård’s languorous skulking. While the director has publically stated that some of his excesses were reined in by the studio, it doesn’t change the currently loose middle.  While some have favoured this to be a more cerebral take on a revenge story, suggesting the slow tempo being more akin to an art-house film rather than a big dumb blockbuster. Why can’t a big blockbuster be smart? Why can’t the same painstaking attention to detail, historical and mythical accuracy be big and bone crunchy without being Thor? When it comes to Viking raiders there isn’t always much nuance, we know they were murderers, we know they were rapists and we know their culture from a millennia ago is different to now; it almost isn’t worth meditating on.

However, despite my complaint The Northman presents a good alternative for cinema going audiences. Robert Eggers is emerging as one of the most interesting filmmakers from the US. Across his three films the young director has consistently managed to build a world unlike any other, with a distinct style in this direction and writing that brings history to life, Shakespeare to genre and nastiness to the mainstream. Eggers has suggested that he’s feeling jaded by his foray with the studio system with plans to take his next project elsewhere. It is Eggers’ weirdness that I so much admire, and for him to have the freedom to get it all out is a very exciting prospect, I eagerly await what’s next.