Britain’s Baby Steps Away From Democracy 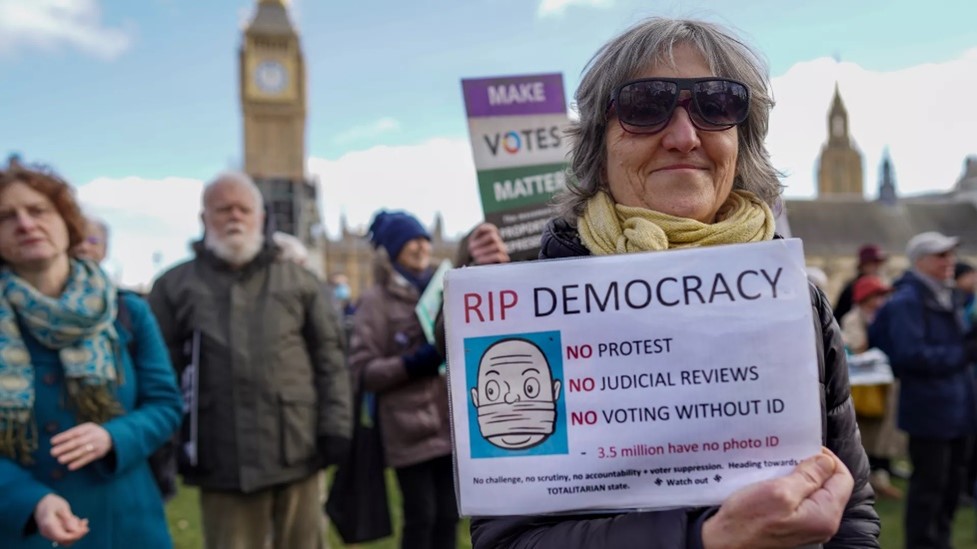 The last couple of weeks have seen the introduction of bills that have serious implications on the way democracy works in this country.

Let’s take a closer look at some of the recent bills.

The right to vote is the foundation of democracy, but a bill passed this week sees an attempt to obstruct key groups of people from exercising their democratic rights. The Elections Act is a new bill that will make it mandatory for voters to show a photo ID at the polling booth. Officially, the bill is designed to prevent voter fraud, but in reality, there have been only four convictions of voter impersonation fraud in the last decade.

Ironically, the bill is designed to put into practice what it claims to be stopping. We only need to look at the kinds of ID that will be allowed to see the true intentions of the bill. Listed as valid forms of identification are Older Person’s Bus Pass, Disabled Person’s Bus Pass, Oyster 60+ Card and Freedom Pass, while young people’s railcards (including 16 to 25 railcard), student ID’s and 18+ oyster cards are all excluded.

This is nothing short of the government attempting to pick and choose their voter base. There’s no surprise that this happens to greatly benefit the conservative party’s demographics. Polling by YouGov shows a clear age split in party allegiance at the 2019 election, with 56 per cent of Labour voters in the 18-24 bracket, and 67 percent of Conservative voters in the top 70+ age bracket.

It’s clear that the bill is designed to choose exactly who gets to vote and who doesn’t.

It’s been defended by a government spokesman as “[bringing] the rest of the UK in line with Northern Ireland, which has had photo identification to vote in elections in 2003”. But at the introduction of IDs in Northern Ireland, there was a 2.3 % drop in turnout the following year. This seemingly small number, if applied to the UK, would mean over a million people would be locked out of voting.

One of the most controversial changes to British law, and the inspiration behind the recent “kill the Bill” protests, the proposition of this bill saw thousands of people take to the streets to protect our basic right to protest.

The Police, Crime, Sentencing and Courts Bill that passed on the 28th of April sees an increase in greater police powers- in particular, their ability to clamp down on protests. The changes allow for police to shut down protests if they are deemed “too noisy” and make it easier to criminalise those who take part in demonstrations.

The bill has been recognised for what it is, an attempt to suppress the public’s right to freedom of assembly, and has been condemned by 350 charities, former senior police officers, and many politicians- including three former prime ministers. On the passing of the bill, Martha Spurrier, director of human rights group Liberty, said: “These new powers represent nothing less than an attack on our right to make our voices heard,” and Amnesty has said that its passing marks a “dark day for civil liberties”.

But this bill is not just an affront to protestors, it also impacts the human rights of ethnic minorities. New trespassing laws allow the arrest of Gypsies, Roma, and Travellers, as well as the confiscation of their homes if they stop in places that have not been designated for them. This coincides with the gradual reduction in authorised areas over the last two decades.

For all its restrictions, the most controversial parts of this bill, like the plans to make “locking on” punishable for up to a year in prison, were rejected by the house of lords. But it may not stay this way for long.

Yet to officially pass, but recently announced in the Queen’s speech, the bill is essentially a rehash of the police bill’s most unpopular elements that were rejected by the house of lords. Strict measures against “locking on” tactics are back, merely reduced to the threat of 6-month imprisonment rather than 12. There is also the introduction of new offences for interfering with key national infrastructure, like airports, railways and even printing presses. These now carry a maximum sentence of 12 months imprisonment, and police will be given increased powers to stop and search.

Among the new suggestions within the bill are the introduction of ‘serious disruption prevention orders. These can ban individuals that have previously been arrested at protests, from participating in further demonstrations, and can even ban people from being involved even in the organisation of protests.

These changes are being touted as a protection against environmental activists, dressed in the language of law and order, but are nothing more than transparent attempts to limit the British public from exercising their democratic rights. The contempt the government has shown towards protesters has been likened by Amnesty international CEO Sacha Deshmukhto to the repressive policies used in Hong Kong, Russia, and Belarus. Though this may seem hyperbolic, the trends in the current government to authoritarian regimes of the past cannot be ignored, and we shouldn’t downplay the danger posed by these so-called protective bills.

In addition to these new laws, there has been the passing of the Judicial Review and Courts Bill which makes it harder to challenge the government in court. There are also plans to overhaul the current human rights act, which civil rights groups warn will strip away protections and further “insulate the state from accountability.” Looking at the steps the country has decided to take, it’s clear you have nothing short of British democracy in decay.