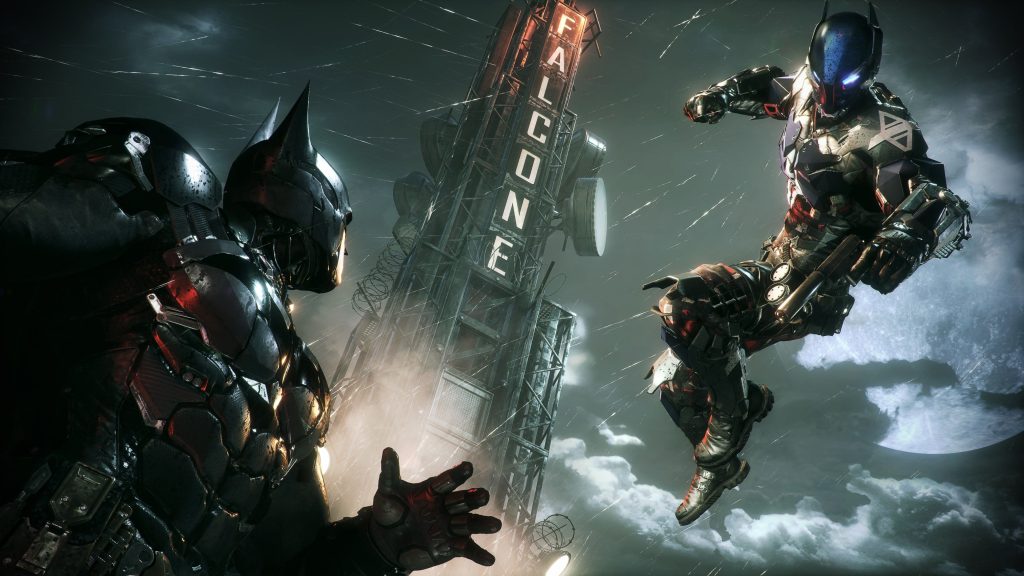 Batman Arkham Knight is the third and final game in the Batman Arkham series. Closing out a truly spectacular trilogy of games with a great yet divisive ending. There is no question that Arkham Knight, in many ways, is miles better than its predecessors but at the same time it also seems to have taken a few steps back. After playing my way through the trilogy over the last month it has given me great Insight to give an accurate and fair opinion about the trilogy, and personally, I find Knight to be my favourite gameplay wise but least favourite dramatically.

While not a lot of real improvements were made, what they did improve greatly adds to gameplay experience. They refined the already improved combat of City to the smoothest combat I’ve ever played to date, allowing for great control over Batman and allowing for a tightly controlled and fluid experience. Effortlessly flowing through the combat, once you have upgraded and familiarised yourself with the new combat, you’ll have such an enjoyable and sometimes cathartic time beating up Gotham’s criminals.

With Arkham Knight being the only main series game to be developed for the Xbox One and the PS4 it had the advantage of greater hardware to use, allowing Rocksteady to create a fully realised city of Gotham for you as the Bat to explore. The bigger cityscape makes the game feel more lived in than the previous two entries. Instead of having a small section of the city or being in an Asylum, Arkham Knight gives you free reign to explore the city to your heart’s content.

With the much bigger city to traverse, there needed to be a better way of getting around, so finally in a Batman video game we got a fully drivable and weaponised Batmobile. It is very well-designed taking cues from the tumbler from The Dark Knight and other older incarnations of the vehicle. While being quite good looking in game it isn’t all looks, it comes with a separate alternate mode which is accessible by just holding the left trigger whilst in it. Doing this transforms the Batmobile into a very manoeuvrable and deadly tank. This secondary mode allows the Batmobile to engage with other tanks and military vehicles with great success allowing the Batman to keep control of the growing threats in Gotham City.

Why it’s the best out of the three.

As said previously, the combat was again overhauled from what it was in Arkham City, and once again where I thought there was not much room for improvement, Rocksteady hit it out the park. Like City you can fight with an ally for example Cat woman or Nightwing. If you have an ally, you can instantly swap to them in combat allowing you to play with someone other than the Bat. But now they added co-op takedowns, where after the ally meter is full you can press the swap character button for an instant team takedown on an opponent. These moves are always cinematic and flashy adding to the overall presentation of the game. Whilst near the Batmobile you can also use it to assist in combat, when the meter is full you can use the Batmobile to takedown and incapacitate an enemy once again in a very impressive and cinematic way. The combat is also the most fluid and responsive it has ever been, eradicating any missed hits or any glitches seen in the prior games.

With the addition of a whole city to explore the game needed to improve its traversal and its mechanics. The Batmobile certainly helps with this, but in certain areas and parts of the story it is inaccessible or unusable, however the upgrades to the grapnel gun allow the Dark Knight to be propelled hundreds of meters into the air to glide across the city. While being a minor upgrade it really made the difference for traversing across the massive open world Rocksteady have constructed.

Another big reason I love this game more than the others is the characters and lore they chose to pull from and how they used it. Many minor villains and characters get their time in the limelight allowing fans of the caped crusader and his rogues gallery to really appreciate the little side missions and cameos they appear in. Low grade villains like Man Bat and Firefly get full side quests, fleshing out their backstory and giving them a chance they don’t usually get in Batman media. Returning characters like Azrael and Nightwing while playing minor roles in Arkham City are now both fully playable and even have their own DLC content. This alone to me is a selling point for fans of Batman or even DC for that matter. All the cameos and references show that Rocksteady really cared about the IP and really knew about the source material and how to best adapt it. This care and attention to detail is visible just through playing the game and shows how passionate the team was about these games.

I slightly touched on the DLC, but it is such a huge bonus to such a great base game. Without the DLC Knight in my eyes is still one of the best games ever, but with it it’s surely undeniable. The first two games had light bits of DLC, a few mission packs and fight scenarios but this game takes that and blows it out the water. Knight has six main DLC packs all including a small story and most having a unique playable character. The Red Hood, Barbara Gordon’s Batgirl, Nightwing, Azrael and more are all playable in their own story or during combat scenarios. The addition of great DLC helps ascend the game to higher levels of greatness.

Why it is the worst in the trilogy

While gameplay wise, it is very easy to see that the third and final game is the strongest, dramatically it was by far the weakest. While Arkham Asylum by today’s standards may feel stiff and gammy to play at times, the story truly still holds up. As not only being a great Batman video game story but being a great Batman story in general. From the start Rocksteady understood what it needed to make a great Batman story but as they got to the finale, they had done most of the best storylines they could have used. Leading them to adapt and eventually creating a whole new villain to face. While not at all being a bad story, it is by far the weakest and is such an outlier because of the great stories from the last two entries. Arkham City like Asylum had an outstanding story which was paced very well and allowed the plot and various plot points and twists to breathe and be discovered and digested by the gamer. But in Arkham Knight the main story at times feels fast tracked and forced. The missions in the main story are very repetitive compared to the first two games. Asylum is a very complete game with a 10–12-hour story, City has a 12–15-hour story while Knights Story will take 15-20+ hours to get through. Obviously, they can be speed run to finish quicker but a normal play through of Knight can be upwards of twice the time of Asylum. While sounding like a positive but with the abundance of side quests and DLC this game can truly take forever to complete.

The boss fights in the previous two entries while not amazing were great spectacles and set pieces to witness letting them get away with subpar boss fights. But in Knight they got rid of the set pieces and replaced them with boring time-consuming boss fights. Only leading to time, I wish I could have spent doing something else.

While having way more positive than negative this game holds a special place in my heart. For being the best Batman game ever made gameplay, combat, graphically wise it is truly astounding how it’s coming to be 7 years old this year. While Rocksteady learned and improved the mechanics every sequel Knight seems to have let itself down narratively. I loved every side mission and DLC story, but I really did not care for the main storyline or the games namesake. Both I found to be very uninteresting and very unoriginal, but all being said there is no game quite like this one. So, if you are an avid Batman or video game fan this is for sure a must play and in my eyes one of the best games ever made.