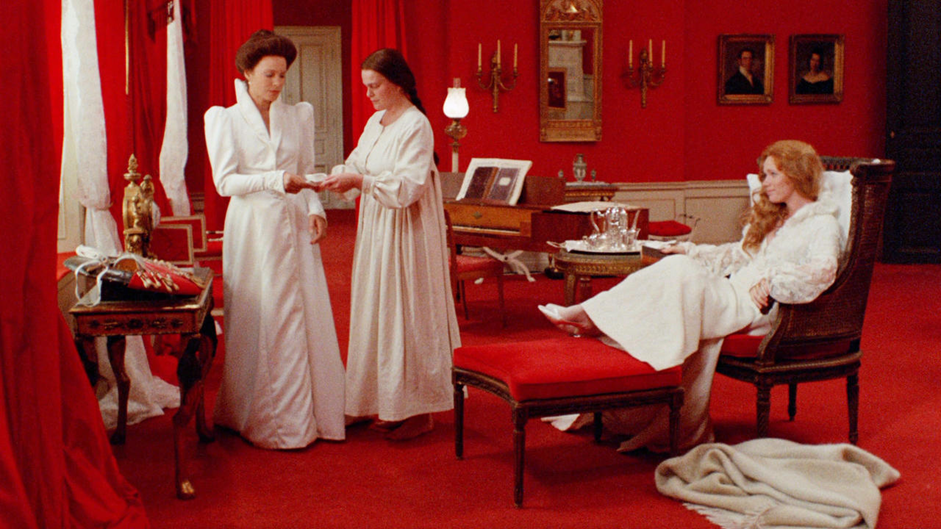 In the gallery of cinema’s heroes, director Ingmar Bergman’s plinth stands tall. Whether or not every cinephile will willingly trawl through his soul wrenching oeuvre, it’s a losing battle to deny its importance. Influencing fellow directors such as Martin Scorsese and Woody Allen; ranking 8th in Sight and Sound’s 2002 poll for greatest directors of all time; and with an entire library filled with books about his work, Bergman is unquestionably one of the greats, leaving a six decade career with 49 features under his belt. This year, one of his most renowned and powerful works Cries and Whispers turns 50. It is a challenging film and one that never leaves you, from its striking bloody, bookending crimson titles, treacherously winding its way, to an elegiac ending of soft whites and harmony. But what is it about Cries and Whispers that makes it so potent?

Cries and Whispers takes us to Sweden at the turn of the 20th century; a stately home stands forlorn in mist, its garden grey and ghostly, seemingly abandoned if not for four inhabitants. Perhaps they are ghosts? Phantoms are everywhere in this film, the shadows of what has been and what never came to pass wander the manor’s lonely hallways. Like in Chekhov, there are three sisters and two of them, Karin (Ingrid Thulid) and Maria (Liv Ullmann), wait as Agnes (Harriet Andersson), the third, dies of cancer while being waited on by their dutiful servant Anna (Kari Sylwan). Ornate clocks chime, the hands drag as rhythmically as Agnes’ death rattle, moving ever closer to midnight. Time isn’t linear in Cries and Whispers it jumps, taking us into the bitter, loveless memories of the sisters as they writhe within their psyches. Whether it’s extra-marital infidelity, inter-marital dysfunction or the silent envy between mother and daughter, we see that despite the great wealth the family possess the ore of love has dried up long ago. Even seemingly happy moments such as a magic lantern show, or the ritual of making oneself look beautiful, appear hollow as if they exist in a fantasy away from the torment of reality. As Agnes’ condition worsens, her sisters are ever more disturbed by the ugliness of death, the flowing movements of unbridled emotion. It ruptures their bourgeois propriety, even if it is their own sister.

It is in Anna that Agnes finds any comfort, a woman that sees the humanity in suffering and understands the pain we all must endure outside the structures of class. Death finally arrives to the house and ghostly visions haunt the remaining occupants, leaving us to question reality. What ensues is an exercise in grief at its most primal as the only people in Agnes’ life try to understand her death.

Cries and Whispers brings together Bergman regulars including cinematographer Sven Nykvist whose beautifully oneiric use of tinted crimsons and blacks won him best cinematography at the 46th annual academy awards. Bergman also received praise at the Cannes and BAFTA ceremonies. While there was some difficulty to find distribution for the film, it quickly gained popularity in the US, meeting a chorus of glowing reviews, and became a much needed financial success for Bergman after years of disappointment. What is so masterful about Cries and Whispers is its boldness in taking performance to its extremities. In claustrophobic close up, Bergman captures every agony, bitter smirk and the void itself in the faces of his performers. The colours of the fabulous costumes and the stark crimson walls feel stifling, entrapping Bergman’s characters and his audience while his use of white is freeing, before sin.  Despite the appearance of a trembling, period melodrama Cries and Whispers is a few degrees from a horror, possessing a dread that hangs like no other. In the 1973 trailer, Bergman gleefully hopes that you will enjoy his latest work. There is certainly much to be fascinated by, obsessed with even, but to say it is enjoyable is another matter. It is perhaps one of the loneliest films committed to celluloid. It’s devastating. While the film commits great violence to the body, such as in one infamously wince inducing moment of self-mutilation, it also commits violence to the soul. A particularly challenging sequence in Cries and Whispers is a dinner between Karin and Maria, quickly destroyed as one divulges their hatred for the other in a cruel showdown of confessions and insults. Left with their dead sister in the other room, these two lonely people drench up their traumas from a seemingly bottomless well, leaving each other battered and in a state of madness. It is one of the most affecting moments in the film as we realise these sisters who are perhaps the only people that could possibly understand each other, that could save themselves from their loneliness and offer love, have become sworn enemies in a world where adversaries are many and friends are few.

However, from such sadness, such cruelty, the film has a coda that celebrates the insatiable beauty of everyday happiness. After Anna has been heartlessly dismissed by Maria and Karin, subservient to their husbands who believe a servant doesn’t require any more compensation than a locket of Agnes,’ she is left to wander the house alone. It is in this time that Anna discovers a true gift, a diary and the memories therein. The long suffering servant turns to a passage, the happiest in a stream of bitterness and regret. Bergman cuts to an exterior, the first where we see the women outside, free from the constraints of memory and pain. It is a pure moment, the water from a lake shimmers, the women wear white and carry sun umbrellas to block them from harm. Class never escapes this family; further entrenched by Anna’s lack of umbrella -she still must weather the existence her class has given her. Yet she wears white too and, even if beneath, in that moment is one with her employers.

Agnes’ diary narrates the scene in harmony with Chopin’s beautiful Mazurka in A minor, for this moment is harmony: A harmony of three sisters of employer and employee of friends, of humanity. The four run to a swing which Anna pushes, as if a mother rocking the cradle. The camera stays in close on Agnes’ face as she takes a moment to watch the often hard faces of her loved ones soften and even bear a smile without malice, without sarcasm. It is at this moment that she realises what happiness is, it’s the moment, without predication, without prejudice and without pain.

The piano crescendos and we are once again taken to a striking red title card which reads: ‘Thus the cries and whispers fall silent’, and so do we in one of cinema’s greatest moments of reflection. It is a bittersweet ending but a meditative one, a parable that reminds audiences that happiness is easily achieved from forgiveness, collaboration, and an allowance to be in the moment. It is an ending that is lasting, from 1973 to 50 years on. In an empty world of political echo chambers, social media polemics and the constant need to seek stimulation, Cries and Whispers offers a remedy, for sometimes even the bitterest pills can be the most effective.