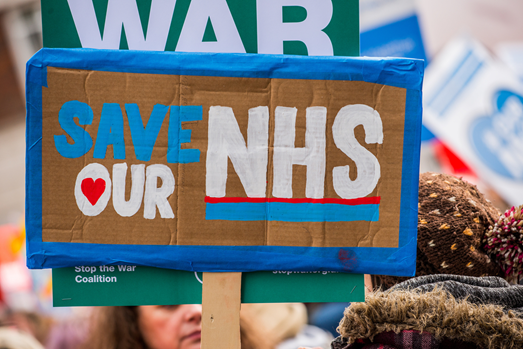 The British right to universal healthcare is to many a symbol of what is great about Britain, it’s hard to think of something that makes modern Britain more patriotic than the NHS.

But dissatisfaction with the National Health Service is the highest it’s been in decades, with research showing that . Decades of neglect and mismanagement, exacerbated by the Covid crisis, have left the health service underfunded, short of staff and simply unequipped to deal with the realities of the county’s health care needs.

We all understand the NHS has become overwhelmed, but it might surprise some just how close to breaking point our health service is.

Wait times have become particularly brutal. There have been numerous complaints across the board, with some worse off than others. For example, some autistic children are now having to wait up to five years for an NHS appointment. Coventry and Warwickshire Partnership NHS Trust report that most have still not had a first appointment an average of 88 weeks after being referred, while Berkshire Healthcare NHS Trust has 2,801 children still awaiting their first appointment after 60 weeks on average. Looking at the national average, children are left waiting 6 months to get a simple first appointment.

This is the same case for the 2,443 children with ADHD referrals who have waited an average of 87 weeks for a first appointment – the longest wait being nearly four years. For adults this wait can be even longer, with many telling the same story of how they have jumped through continual hoops only to be put on a five year wait list at the end of the lengthy process.

With these wait times, many simply go untreated and nowhere is this worse than in mental health.16 million people are currently on the waiting list, with 374,000 of them being under 18. Some families have to wait for as long as 81 days before their child is seen, despite some having self-harmed or had suicidal thoughts. And those are just the people who have made it onto the list, but what about those that don’t even get that far?

One disturbing report revealed that CAMHS were rejecting half of their under 18 referrals who were suffering from anxiety, depression, and self-harm, because their symptoms were not seen as severe enough. One such case is that of a 12-year-old boy found with a ligature in his room who was refused help because there were no marks on his neck.

Faced with this reality, more and more people have no option to turn to private care. In fact, data shows that Britons now pay almost as much as Americans in out-of-pocket healthcare spending. Since 2010, UK spending on hospital treatments has increased by 60 per cent. As John Burn-Murdoch writes for the financial times, “It is easy to paint the US healthcare experience as a capitalist dystopia, and the NHS as its socialist antithesis, but with each passing year this moves further from the truth.” The two systems now share an uncomfortable amount in common. It is in Britain, not America, that the number of people resorting to crowdfunding to meet medical costs has risen 20-fold within the last 5 years. Hundreds of British people are also resorting to GoFundMe campaigns to pay for treatments not provided by the NHS, or to seek treatment abroad to avoid long waiting times.

If you can find the funds, private healthcare is a godsend. One patient describes how she had been on a 5- year waiting list but, once private, was able to get in contact with a psychiatrist within 24 hours. Yet for many this cost is unfeasible. The hardest hit by this increasing need for private care will undoubtedly be the poorest.

There have been growing fears around the potential of NHS privatisation, but the narrative that our health service is being sold off for a quick profit is not exactly true. Although there is the threat of private companies having more say in our health care with the Health and care Act 2022, the real threat to British healthcare is not the explicit selling off of public services, but the creeping dependence on private alternatives. Needless to say, the normalisation of paying for medical services out of desperation to avoid extremely long wait times should not be the norm, especially in a country so proud of its public healthcare.

Britain is full of stories like that of Ava Fletcher, a 15-year-old girl who struggled to get an autism diagnosis on the NHS, even after being hospitalised due to self-harm. In the end, Ava had to opt for a private diagnosis that ended up costing the family thousands of pounds, all to receive a diagnosis by a doctor within the very CAMHS service that had kept her waiting.

All About: The Mediterranean Diet