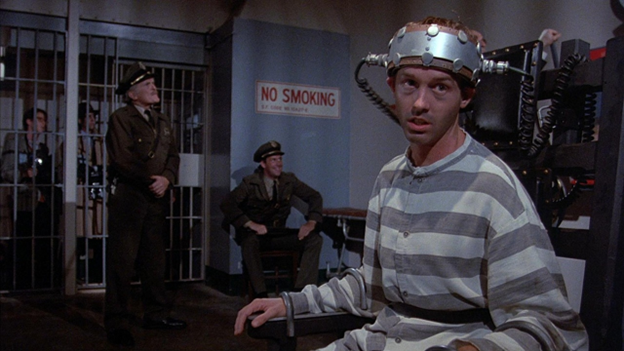 With the release of The Evil Dead, Sam Raimi burst onto the scene as one of the most interesting and creative filmmakers of his generation. This unknown, young director made an instant cult classic with almost no money and no professional experience, and he did this all while being thousands of miles away from Hollywood in the woods of Detroit. With his high school friend in the lead role, this low budget horror would become one of the most successful independent films of all time, and make horror icons of Raimi and the film’s star Bruce Campbell.

At the same time the film launched the career of one of the film’s editors, Joel Coen. Joel and his brother Ethan have since gone on to become two of the most acclaimed writer-directors working today, outshining Raimi’s own career. By 1985, the Coen brothers were wrapping up their stylish neo noir thriller Blood Simple, and were set to rewrite a script. Their new Hitchcockian thriller; Crimewave , which would be helmed by none other than their old collaborator Sam Raimi and would almost ruin their careers.

On the face of it, matching up these visionary independent filmmakers seemed like a sure-fire success; especially since Raimi had once again secured the eccentric Bruce Campbell in the lead role. It was surely a cult film in the making. But Crimewave never did reach cult status.  In fact if it didn’t have such famous names attached, it might be relegated to complete obscurity. For all its talent behind the camera the film never did find an audience. Why? Because they made a film that would appeal to absolutely no one.

A bizarre mix of suspense, horror, and slapstick comedy, the film’s plot revolves around a couple of exterminator hitmen who kill the owner of a burglar-alarm company. But things soon get complicated when they accidentally kill the man who hired them, and they begin brutally murdering every witness to the murder. Meanwhile, a nerdy security guard meets the girl of his dreams and competes with his slick romantic rival named Renaldo (played by Bruce Campbell, who was relegated to a minor role at the behest of the studio). The two storylines are clumsily mashed together until they converge, the film itself turning into an action movie as our “hero” faces off against the villainous exterminators on a Detroit highway.

Even this description does not get across how strange the film is. Dialogue is awkwardly overdubbed and sound effects are added seemingly at random, but by far the weirdest part is the film’s tone. Structured like a straightforward Noir, it’s missing the comedic edge of the Coen’s later Burn after Reading. Yet at the same time, it also features over the top slapstick and cheap sight gags that feel straight out of a Zucker brothers movie.

Raimi described the premise as “the three stooges directed by Hitchcock”; an intriguing vision but in reality a mess of tone and style. This unorthodox match up never quite fits together, though it is not entirely the filmmaker’s fault as the production was notoriously troubled. Given an inadequate budget, and a schedule that led to overruns, Raimi and the studio executives fought over virtually every aspect of the production. The final version had Raimi’s original composer and editor replaced, and was even allegedly re-edited before the director had the chance to complete a first cut.

And it shows. The editing is incredibly fragmented, switching between storylines at odd intervals and making for sluggish pacing. The film’s runtime is under 90 minutes but easily feels two hours. Stunts that clearly went wrong are left in the film, actors show up in multiple roles because so many of the cast quit due to poor working conditions. One actor would later say of the production that “it was mostly luck that nobody got seriously injured or died working on this”.

Raimi and Campbell were naively unprepared for working inside the studio system and didn’t factor in bureaucratic details like union fees, indoor heating, or safety precautions. They also tried to apply their own reckless style of film making to a Hollywood production, requiring one  studio executive needing to explain to them that they could not simply lightly hit the lead actress with a car to get the effect they wanted.

Yet even in this disaster there are glimmers of brilliance. One thing that really does work is the film’s unique style. Raimi painstakingly created a world that functions like a live action cartoon. The wacky camera movements and the violent but gleeful action sequences form a stylish approach that a lesser filmmaker could not pull off. Even with studio interference, Raimi’s talent still shines through. One surreal set peice is especially brilliant and successfully blends terror with zany humour in a scene that feels like it was ripped out of Evil dead 2. If nothing else, the film is a showcase of an era in Raimi’s career where he was endlessly inventive in his film making, rivaling even that of the creativity that made Evil dead 2 so unforgettable.

Unfortunately, his talent is all in service of a doomed production. It certainly could have been more coherent had the studio not ripped out pages of the script to save production costs, or radically changed the film in the editing process. But the bigger problem was that Raimi and Campbell’s unconventionality simply did not fit into the Hollywood system. This conflict between naïve creativity and the realities of modern filmmaking doomed the entire film. Film critic Peter Sobczynski described Crimewave as “a film that wants to follow its own lead but keeps being wrenched back into something more conventional”.  It’s precisely because of this contradiction that Bruce Campbell’s performance doesn’t work. In the Evil Dead series, his performance is overdramatic, eccentric and charismatic in a way that elevates the film, but here amongst more conventional performances, it feels incredibly out of place and every gag falls flat. But this is not only the fault of the studio. Reflecting on the film, Raimi seems to suggest that the project was troubled from its inception. “Crimewave”, he said “the problem with that movie, one of its many problems, is it didn’t know what is was about…it was a comedy, a drama , an adventure, a love story, and it ended up being none of these things”. He wryly he goes on to say,

“I wanted it to be the ultimate picture of entertainment, to thrill, chill, make the audience laugh, cry, scream.

They screamed…for their money back”