Bo Burnham: Inside, One Year Later 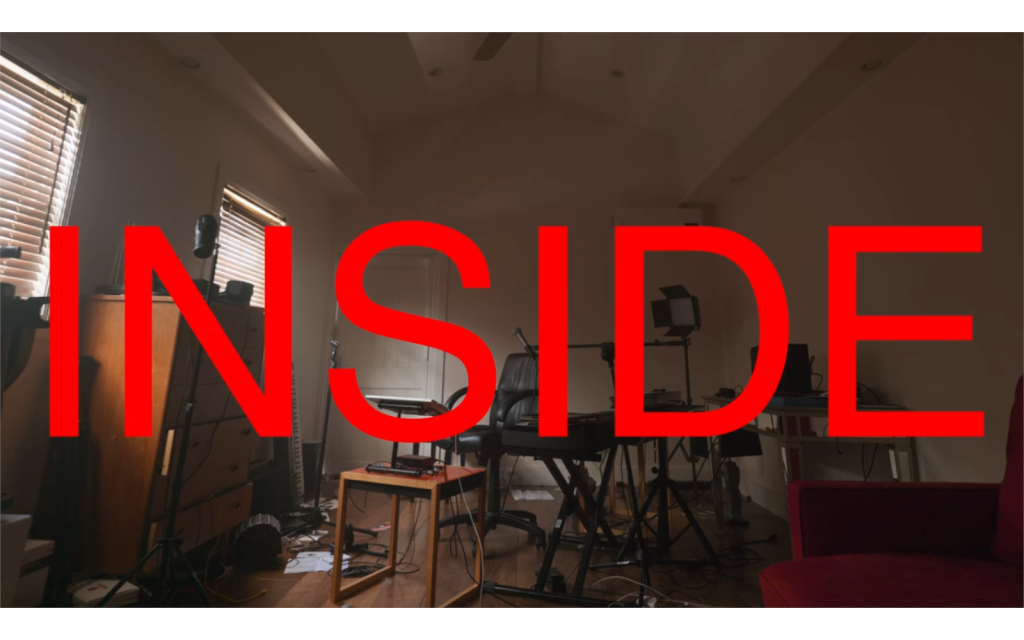 Bo Burnham’s body of work and his wider place in Millennial culture, with its self-conscious dorkiness and privatised emotion, its all-encompassing performativity (as Gen Z, I wouldn’t know anything about that), has never appealed to me. I didn’t watch Inside when it was released this time last year, despite its thunderous reception. Why would I? I was already living it. The special appeared to me as something voyeuristic, taking the incomprehensibility of the pandemic and late capitalist living and making it into another oil-sodden electro-tendril of that very same machine. How can there be earnestness if it’s all, ultimately, for profit? Doesn’t that make it easier to lie about how you feel? Lie about what you believe in? Why show others your soul, when showing them the soul that you’ve crafted will get more engagement?

It was six months before I learned the special was predominantly musical – I assumed it was more of a video diary – and a further six months until I felt ready to watch it. I wasn’t ready for Inside to have the same questions that I did. I wasn’t ready for it to be as gnarled and cynical as I – a full nine years younger than Burnham – wanted it to be. And I certainly wasn’t ready to be called out as a zoomer who should expect to develop a dissociative disorder in the next five years. Joke’s on you, Bo. I already have one.

At first glance, the parts that are more closely related to pandemic living – such as “FaceTime with my Mom (Tonight)” – have aged worse than those which take a wider look at modern society. But take this lyric from “Sexting”; “Emojis only; we don’t need phonetical diction/We’ll talk dirty like we’re ancient Egyptians”. It’s easy to point at emoji usage, especially unironic usage, and decry it as an example of decaying linguistic capabilities and intelligence. ‘Look how dumb our kids are’, and so on. But we’re in a world where people find it safer to talk about their feelings to a camera or a keyboard – not just during a pandemic – than with someone they know and trust. The idea of boiling down sexual interactions to cartoons sent via SMS, removing any personal involvement or vulnerability, isn’t completely out of touch. Burnham’s ruminations on isolation and a steeply-increasing dependency on technology as a shield during social interaction will still hold water in a decade. If there’s any water left by then, that is.

The political songs are personal stand-outs, like “How the World Works”, “Welcome to the Internet”, and the “Bezos” tracks, and they capture a feeling that many satirical works are missing. I really wasn’t expecting the “is there anything better than pussy?” guy to start singing about the global network of capital, or the paedophilic corporate elite. Perhaps the allusions to Marxist economic analysis are ironic, performative even, but I doubt it. Burnham’s songs about Jeff Bezos, second richest man in the world, venerate him in such a crude way – “Zuckerberg and Gates and Buffett/Amateurs can f*ckin’ suck it/F*ck their wives, drink their blood/Come on, Jeff, get ‘em”. There is a respect that has to be given to Bezos, isn’t there? The son of a teenage mother and now he’s launching himself into space – he played the system, and thus became its most infamous pillar. We’re the rubes, and it must be subconsciously appealing for some people to revere the man. He’d see you hanged, drawn, and quartered for a quarter. He genuinely has the means to steal your partner and drink your blood, and the only way to stop him – as Burnham earlier implies – is to take those means away from him.

The main thrust of the special is Burnham’s deteriorating mental state. This isn’t particularly overt, Inside doesn’t sell itself as ‘about mental health’, but the contents and tone are on a continuous downturn. The imagery shifts between artificial and plandid, between the heightened reality of Bo’s live face projected onto the wall behind him with a split-second of delay, and the equally-heightened reality of his scattered room/mind, with Bo editing or testing out the technical equipment in silence. There’ll be a parody of gaming streamers, ‘playing’ a day in the life of Bo – “press X to cry” – or he’ll simply start to talk about his emotions, before getting angry and giving up.

All of this is done in such a self-conscious and stylised way. You’re not meant to identify with Burnham. Not really. The Bo Burnham of Inside isn’t the Bo Burnham of reality. The Bo Burnham of his prior stand-up shows, or his Vines or his YouTube videos, also aren’t the real Robert Pickering “Bo” Burnham. It’s all performative. The only exception for Inside is that it’s knowingly performative. It’s self-aware in its highly-curated discursiveness. As he sings in “Content”, “I made you some content/Daddy made you your favourite, open wide”. Does that self-awareness excuse it, though? It’s not as if Burnham goes into detail about what he’s struggling with – we all know what he’s struggling with at times, and at other times, that’s simply his business. He never gives personal information, beyond what the lyric or the scene calls for. And even that could be fictional. I was wrong to think that this would be voyeuristic. If anything, Inside is incongruously impersonal. We’re inside the room with Bo, but he’s not sharing anything. Towards the end, he jokes that next time he’ll sit down and watch us on TV; there’s nothing to be gained from anyone else selling their life, and it’s absurd how normal that idea has become.

Finally watching Inside hasn’t particularly changed my mind on the rest of Bo Burnham’s work. A creative whose output is as reliant on internet culture as his will inevitably have a niche audience. I was raised by the internet and Burnham’s earlier work still doesn’t feel like it’s ‘for me’. But then again, so much of the modern world isn’t ‘for me’. I wasn’t born to scroll through social media, being fed an endless, frenetic, and ever-distorted stream of content. I wasn’t born to be inundated with knowledge of melting ice caps or insurmountable wealth trapped in the hands of a self-appointed few. I wasn’t born to do anything. If there’s one thing that I’m able to take away from Inside, it’s that I should probably go outside and do nothing.