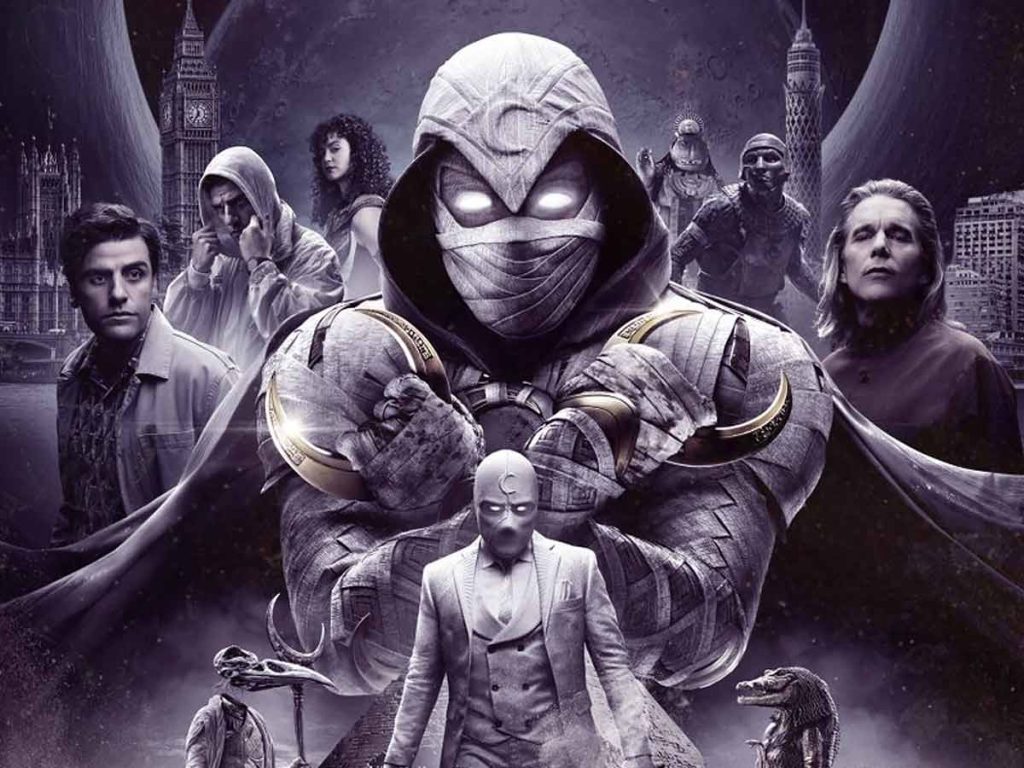 Moon Knight is the latest Disney+ TV show that recently hit the streaming service. It is a brand-new show based on a very popular character from Marvel’s pantheon of comic book superheroes. The titular role is played by Oscar Isaac, who is really in favour in Hollywood now and for good reason, the performance he gave in the show was outstanding and was, apart from the villain, by far the standout. The story, while only a limited 6-episode series, really hooked me in from very early on due to its strange and very fresh feeling characters and plot. It feels like it fits into the MCU but it for sure has its own tone and flavour of action. While he is a hero and the protagonist of the show, the Moon Knight is shown to do very violent and bloody acts. This to me helps move him further away from the cookie-cutter heroes like Iron Man and Captain America to give him more of an antihero sort of vibe.

What I liked about the show

First of all, the overall story, while rushed a bit towards the end, I found to be greatly entertaining and kept me coming back until I ultimately finished the 6 episodes. It was filled with great action and set pieces, as well as having some of the best written and believable characters and dialogue I have seen in a while. They all act and communicate like real people which adds so much to the story and the characters within it. The acting all round is also top-notch, especially from the lead Oscar Isaac who plays multiple characters throughout the show’s runtime, which showed his range as an actor and was believably portraying every role he was asked to.

The fight scenes are also particularly great, especially the ending fight scene, it is well choreographed and for the most part, has great CGI But I would be lying if I pretended it didn’t look a bit shoddy at times, but in hindsight is entirely forgivable because of the nature of the fights. It is something that would not have been possible to shoot entirely live-action.

My next two pros of the series are minor spoilers, but I will not go into them in any detail just wanted to praise how they depicted it.

I found how it depicted abuse was very well done, obviously it was very messed up and heart-wrenching to watch, but it showed us why certain things are how they are and why certain people act how they do. It’s the most realistic portrayal of abuse I have seen in a long time and helps to make a connection with anyone who has been in a similar situation. It is uncompromising and raw which really hits you in the stomach. It is a testament to how well it was handled and translated to the screen.

Another slightly spoiler-y pro to the show was how it depicted mental illness. While maybe not being the most tasteful and mainstream way of humanising a character, I think the use of mental illness in fiction to do so is severely underutilised. While most comic book heroes and villains don’t have many human traits aside from being good and evil, the use of mental illness in Moon Knight instantly gives the watcher an easier time connecting with the sufferer because they act and feel more human than most other protagonists. It is such a fresh take to see the hero for once be struggling with inner demons much harder than the antagonist is. With it usually being the other way round which really helps me connect with the show and protagonist. I love when shows/films and the characters within them subvert any perceived notion we thought we had of them. The flipping of what you expected really adds to the characters and the overarching plot through the show’s narrative.

And finally, my last main positive of the show was the very unexpected but great post-credit scene. It left the door wide open for more Moon Knight, but I don’t think there will be another series, this is because Moon Knight was listed as a limited series. While not for sure meaning it won’t get another series it is a sign we might not. But even without another series of his own the Moon Knight is scheduled and set to appear in some MCU films over the coming years. Putting fans of the show and of the character at ease knowing he will return. While no one really knows what will happen I do hope they make a season 2 because whatever films he appears in he won’t be the main character so won’t get much limelight. I feel a lot can be done with this character and would benefit Marvel and the fans to renew it for a second season.

Problems I had with the show

First, this really isn’t a very fair point, but it is a valid criticism. It needed one or two more episodes, the pacing through episodes 1-5 was great and had a steady pace throughout. But the finale felt so rushed and condensed, so much happens in such a short time it really needed that extra episode or 2. With it, I think the first season would have been close to perfect honestly. It does so much more right than wrong but what it does wrong is bad in my eyes.

A pet peeve of mine in fiction is when characters give speeches or exposition on their deathbed. It is the most unrealistic thing ever and really takes me out of the experience every time I see it happen. It’s annoying because the show has been so real up until now, obviously not all the superhero and mystical stuff but how the characters have acted and how they have been written. It felt real and natural most of the way through so to see a scene where a character is giving out crucial exposition on their deathbed did kind of stand out to me tonally.

My last 2 problems contain spoilers so read at your own risk if you haven’t watched the show already.

Again, going into how the show needed more runtime, I hated how Laila shows up at the end with her new suit fighting alongside Mark and Steven as if she’s been an Avenger for years. To me, it comes so far out of left field feeling like they shoehorned it in because they knew they wouldn’t get another season to show her get her powers or just because of bad narrative and pacing decisions. Either way, I really disliked how quick she went from almost defenceless to being insanely adept in combat.

Finally, my last problem with this great show is the ending. While the final fight for the most part was epic and had great action, after the fight it ended very abruptly. With Mark and Steven waking up in their bed believing it all to be a dream. For the third point running, this shows how lacking the final episode was at wrapping up the story. Instead of concluding on a nice ending or even a cliff hanger it just ends with seemingly not much thought gone into it. The post-credit scene does redeem the ending somewhat but no way near enough, and even that doesn’t give us any answers. It does tie up one loose end but nothing else. That is why I hope we get another season or a standalone or a movie where he is one of the main casts, this I feel is needed to satisfyingly cap off this story. Obviously stretch it out over a couple of years but I and many others do want an end to his and the overall story of the show. Hopefully, we don’t have to wait too long for it and the reception the show got should help Moon Knight get more appearances in the future.

The show, while being flawed in more ways than one, really struck a chord with me, and I think it was how the characters act and how they are portrayed. For the most part it felt genuine, and it really connected with me. Especially the abuse and mental illness aspects of it, it felt like they really tried to do it tastefully and to me they did. I get its real touchy subjects that shouldn’t just be thrown around so freely in fiction, but they are subjects I feel need to be touched on more. They are things people suffer from in real life and things that should translate into fiction, If done tastefully to increase awareness for these controversial topics.