I Watched Five Netflix Horror Movies and Got What I Deserved 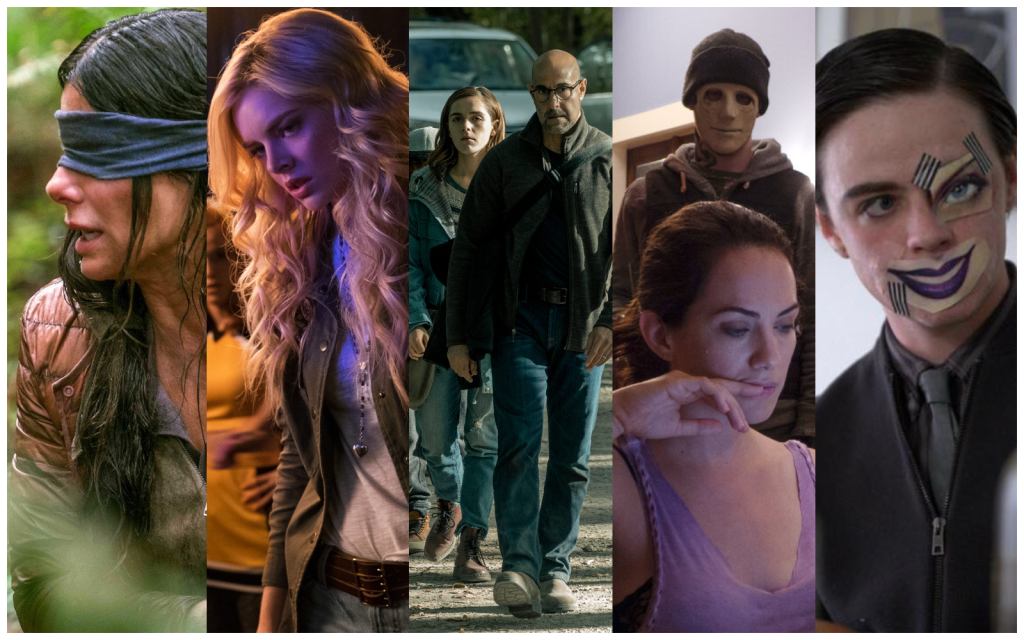 During the last decade, from Orange is the New Black to Bojack Horseman, Netflix seemed to be paving the way for media production and distribution. The Netflix Originals line, including movies such as Scorsese’s The Irishman (2019), could have been representative of the company’s output and the decade’s pop culture as a whole. Yet their Original movies often struggle against the fearful spectre of being really, really bad. Netflix has a habit of snatching up cheap distribution rights after projects languish and fail to acquire any sort of sustained cinematic release. Quality comes second to the quantity of things they can edit their logo onto.

Before his work on The Shining (1980) sequel Doctor Sleep (2019), writer-director Mike Flanagan wrote Hush with long-time collaborator Kate Seigel. Seigel also plays Maddie, a writer working on her second novel in the woods. There, she is tormented by a masked stranger intent on torturing and killing her. It would be a yawn-inducing slasher set-up, if not for the flourishes that the pair bring to the genre.

Due to a childhood case of meningitis, Maddie is deaf-mute—and her role as an isolated victim is suddenly much more visceral. The opening, with her friend conversing with Maddie through a mix of American Sign Language and lip reading, is warm and distinct. The friendly awkwardness of their communication, such as calling Maddie a great kisser instead of a great storyteller, makes the eventual violence more upsetting. Whilst the film looks and feels extremely cheap, the slasher genre has much worse entries on this list. Wanting Maddie to survive and watching her unique struggles is a paramount experience.

The Babysitter (2017)
Directed by McG
Written by Brian Duffield

The Babysitter, a comedy-horror slasher directed by former record producer McG, is the exact opposite of Hush. Despite being under the Netflix Originals label, it’s the sort of mysterious low-budget film you’d rent on Amazon Prime for the price of a milkshake. 12-year-old Cole (Judah Lewis) has a crush on his confident and sexy, yet dorky and clever, babysitter Bee (Samara Weaving). One night, Cole witnesses her initiate a satanic ritual. Along with her cast of stereotypical friends – the arty Asian girl, the jock, the cheerleader, and the black guy – Cole is hunted through the night.

The typical victims of the slasher, teenagers, are instead recast as the villains, hunting an even younger archetype – the pre-teen. At the age of 12 the perceived maturities of teenagers can be intimidating, but it’s inherently such a juvenile viewpoint that any film made about it will be as immature and idiotic as The Babysitter, a film as leery as it is lazy. Predominantly, the film seems like Duffield’s excuse to voice some deep-seated grudges about his own teenage years. Coming from a middle-aged writer and a middle-aged director, we have a group of teens scornfully sexualised by an even younger protagonist. There’s random text on-screen at moments meant to elicit shocks and laughs. With jokes about deflated boobs, AIDS, and black men having big penises, heaps of cheap gore, and a climax set to “We Are the Champions”, it’s a 1990s parody movie with the Netflix logo slapped on it – probably because no real distribution company wanted their name attached. A sequel was released in 2020 and a third instalment has been teased by McG.

The first Netflix-produced movie on this list, Bird Box is infamously terrible. In some ways that makes it an easy target, but there’s not enough processing power in every computer on Earth, nor enough hyperbole in the English language, that conveys how terrible it is. Effortlessly boring? It’s the type of movie where the creators and their audience conflate slowness with tension and allegory with meaning.

Based on the 2014 novel of the same name, strange creatures descend on the world which drive people to suicide as soon as they are seen. Our protagonist, played by Sandra Bullock, hides away in a house with a group of disparate strangers. Their spiritual and political explanations for the chaos are the throughline of the first two acts. Much of this is already dated (“let’s make the apocalypse great again!”) just four years hence. Instead of having something to say, Bird Box throws loads of potential meanings at the wall and hopes something sticks. Is it the product of a politically and socially divided nation? A testament to fearless motherhood? Pick your own meaning and fill in the blanks, so the movie doesn’t have to do any hard work.

One of the less notable entries into the ‘loss of senses’ subgenre of horror movies, The Silence asks the profound questions. For example, what if we all had to be really quiet forever because of monsters? The similarities to 2018’s A Quiet Place, as well as Bird Box, are mostly coincidental – The Silence was originally a 2015 novel. But they remain in-keeping with the mystical ability, held only by streaming services, which allows a consistent release of wholly redundant media.

The cast includes Kiernan Shipka, who plays deaf teenager Ally, and Stanley Tucci, Ally’s father, but nothing humanistic or engaging is given to them. Whereas Bird Box decided to signpost every plot point and character beat as holding meaning, The Silence is a slideshow of clichés familiar to anyone who’s seen The Walking Dead (2010-2022), impatiently thrusting all the tropes of its subgenre at you. Wouldn’t it be terrible if there were these weird creatures? Wouldn’t it be terrible if the entirety of modern infrastructure were to fail? Wouldn’t it be terrible if people sent mothers and babies to their death without a second thought? Bird Box has a better grasp on storytelling techniques and human behaviour.

Whilst there is no definitive experience of ‘being deaf’, Ally’s ability to speak and read lips means her deafness hardly plays into the movie. There is nothing clever done with perspective, nor her unique relationship with this new world. It makes the film seem uninterested in her struggle, and her characterisation is a far cry from Maddie’s story in Hush. She appears to be deaf solely so audiences can draw an imaginary comparison between it and the rabid creatures hunting by sound. In other words, it’s so the same people who just finished watching Bird Box can nod along and say, ‘wow, so deep’. Perhaps these types of movies are able to speak to a particular feeling. They must be, considering there were three in development at the same time. But with the quality of them being such that Netflix can simply acquire their distribution rights? It’s a tough demand to take their ideas seriously.

Despite the ridiculous title, Choose or Die opens with considerable promise. As his family argues in the kitchen, Hal (Eddie Marsan) hides away in his man cave, surrounded by 80s paraphernalia. He loads up an old text-based adventure game, CURS>R, which soon begins to narrate and control his reality. The cursed game winds up in the hands of Kayla (Iola Evans) and her friend Isaac (Asa Butterfield), wreaking havoc on their lives in violent, gamified ways. You might imagine the movie is a rumination on nostalgia, and prescriptive and overly-referential imitations of 80s pop culture (Stranger Things, anyone?). Truth is, the movie is so disastrously idiotic that any message or satire is lost in a procession of cheesy scenes and tropes. With no sense of pace or progression, Choose or Die throws its protagonist into a series of bizarre and violent games. Barely twenty minutes go by before the game makes a hypnotised waitress eat shards of glass, just for giggles.

CURS>R isn’t initially shown as an escape for Kayla. In fact, she laughs at Isaac’s obsession with 80s media and technology until it becomes a significant part of the plot. Before that, we’re subjected to a lurid obsession with Kayla and her mother. Their lives are marked by poverty, grief, and addiction for no reason other than making the movie seem more mature. Their landlord asks Kayla to prostitute herself, whilst the word “MEAT” has been carved into the wall. Does it mean anything? Perhaps it would in a movie that isn’t about a cursed video game. Not once does that game blur the lines between fiction and reality, past and present, in an interesting or meaningful way. Choose or Die had a crystal-clear point to make. It’s sat under the same Netflix Originals label as the type of media it should’ve been critiquing. Despite the cool conceit, the movie lacks any coherent dramatic moment or thematic decision which makes the central idea – that perhaps we took the 1980s nostalgia a little bit too far – into a worthwhile exercise.

It’s another film released solely to pad out the Netflix Originals line, doomed to sit within the ‘you might like’ tab until some other cursed soul takes a gamble.