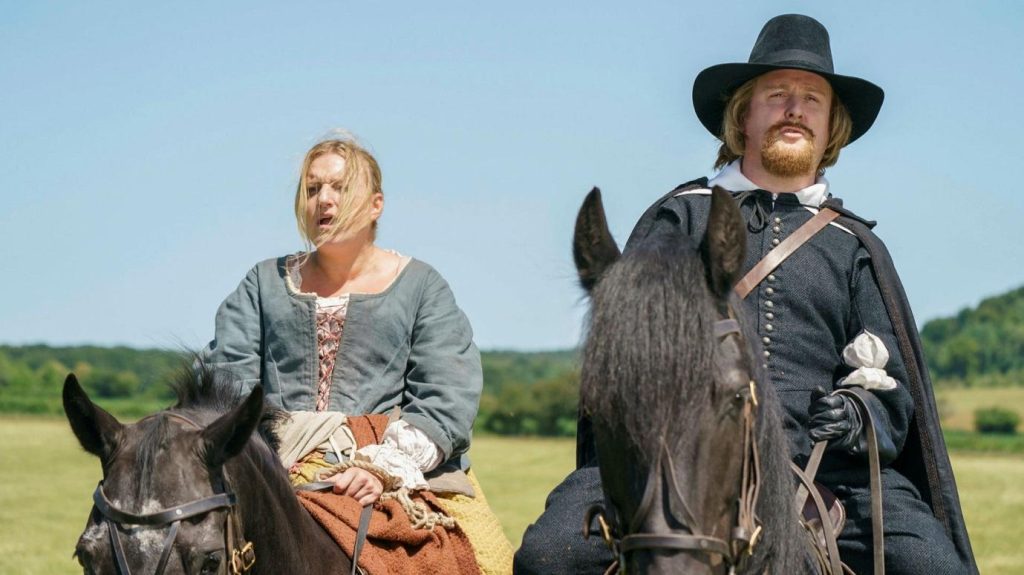 The Witchfinder is the bewitching new comedy written by Neil & Rob Gibbons, produced by BabyCow, which aired on BBC 2 in March. The writing duo, who’ve spent the best part of a decade working on a multitude of Steve Coogan’s Alan Partridge projects, now take us to Britain in the 1640s where disease, civil war and superstition plague the land. Tim Key dons the wide brimmed role of the eponymous witchfinder opposite suspected witch and confirmed nuisance Daisy May Cooper. What starts as a dastardly scheme of mistaken identity becomes an unexpected road movie with drunken cavaliers, highwaymen and religious zealots. It’s a lot of fun, with great chemistry between Key and May Cooper who enact a bizarre Elizabethan version of Planes, Trains and Automobiles in moments both quick witted and downright surreal.

Tim Key is Gideon Bannister, of whom you may have heard, a roving witchfinder down on his luck. Accompanied by his God fearing, rotten toothed assistant Old Meyers, fantastically played by Jessica Hynes, Bannister rolls into a town beset with a witches’ coven. Despite Gideon’s written treatise on the finding of witches, his shoddy experience leaves him with the case of Albert, a murdered pig. The suspect is no other than the brash, outspoken and universally disliked Thomasine Gooch (May Cooper). However, news of the coven has spread, drawing other witchfinders into town including Hebble, Gideon’s arch rival, portrayed by Daniel Rigby whose performance here is as brilliant as Will Sharpe’s phenomenal Flowers, and witchfinder general Matthew Hopkins’ right hand man John Sterne. After Sterne’s mysterious death, Bannister discovers the location of the witchfinder general and plans to sweeten up his hero by offering Gooch as the accused murderer. On the road to Chelmsford, Bannister and Gooch take a treacherous path filled with marauding cavalier soldiers and baying mobs while slowly developing an awkward but quietly affectionate friendship. But with Gideon’s rival hot on the trail, using Old Meyers as an unwitting compass, it isn’t long until Gideon’s quest becomes a cursed one. When finally meeting his hero Hopkins, an often disappointing experience, Gideon must choose between his aspirations and the truth.

Tim Key presents us with an excellently nuanced performance that fuses misplaced loquacious confidence, and irritable seriousness with a strange awkwardness that you can’t take your eyes off. He’s an unlovable loser but keeps us engaged with his use of amusing word play and flashes of outsider angst. His middle-class snobbishness fantastically clashes with Daisy May Cooper’s peasant brazenness. It would be easy to see May Cooper as somewhat typecast as the street-smart bumpkin, a similar role to that of small-town Kerry in BBC’s fantastic This Country¸ but here she plays unconventionally fiery and by offering inquisitive blows often leaves her sparring partners bewildered. One fabulous scene, also featuring Allan Mustafa from BBC big hitter People Just do Nothing, includes an extended discussion about ownership rights of abandoned apples with fabulously agonizing pettiness.  The Witchfinder has a cornucopia of cameo delights forcing viewers to quickly exclaim ‘look it’s them’! Some notables are Reece Shearsmith who plays the formidably snarling, clack of the shoe obsessed, witchfinder general Matthew Hopkins; Julian Barratt as a conniving, demagogic highwayman, even Ricky Tomlinson makes an appearance as a candid, no nonsense magistrate. But unfortunately, the problem with The Witchfinder is that, in its rather stripped back story, it introduces too many of these flamboyant and big characters that are never really utilized in fulfilling ways. In the programme’s six episode run, it is a shame that even some of the principle cast don’t get full arcs, particularly Jessica Hynes and Hebble’s bumbling assistant Cumberlidge, played by Tuwaine Barrett in an understated and extremely likeable performance. There is a fun dynamic set up between Hynes and Barrett that is next fully realised and makes for a disappointing loose end.

The Witchfinder is a small story spread across a large tapestry; it makes no attempt to tell a grand story and is the better for it. The small interactions of its cast prove The Witchfinder is a programme about its characters rather than the time.  It is a story of friendship rather than an overarching satire of zealous persecution. There have been plenty of showy characters portrayed in this period, who can forget Vincent Price’s pantomimic Mathew Hopkins in The Witchfinder General or the historical cleverness of Black Adder, as well as linguistic sharpness in Elizabethan sitcom Upstart Crow. The Witchfinder takes an individual in a time of hysteria to break ideological rank and make a choice that he feels is right. While seemingly a programme about the nastiness and heartlessness of persecuting a woman with an opinion, which seems particularly pertinent after a recent law change over the pond, Witchfinder doesn’t solely aim to tackle this. It’s about doctrine and the stories people tell themselves in a world of danger and violence, a time riddled with plague and a civil war, sound familiar? How do the people reckon with the chaotic changes that surround them? They create fictions and belief systems that force them to question their intrinsic values and even what’s before their very eyes. It is the privileged charlatans that rile the ‘baying mob’, for fame, wealth and personal whim, that profits from this hysteria. Some critics have taken complaint with The Witchfinder’s lack of depth when regarding the issues of the period, but does it need to? Audiences already know to distrust a witchfinder, they’re devious, we know that accusing innocent women of witchcraft and torturing them under mob is abhorrent.

There is certainly a viciousness to The Witchfinder, a nastiness that bubbles beneath the surface with dead women hanging from trees, bodies shoved in carts and humiliating confessional rituals. The shock is how casual such horrors seem to be, the programme plays it for laughs and yet we are uncomfortable and left nervous throughout. This feeling sits on the audience’s shoulders within the two episodes where Gideon and Thomasine travel through the religiously creepy boundaries of Dedham Vale. The Witchfinder also gives real credence to old wyrd England with a soundtrack of folk songs and haunting strings, alongside psychedelic moments reminiscent of Ben Wheatley’s A Field in England. Even if the series doesn’t always get too bogged down in historical accuracy, there’s plenty of fun in portraying historical realities. Low rates of literacy, the speed of travel and the inability to truly know what celebrities of the time really look like, make for great plot devices and gags. Even going swimming is represented as a joyous experience in a world that despite the restrictions of simplicity doesn’t have the distractions and anxieties of modernity.

By the end of the series it seems reason is the saving force, even if handled in an incredibly strange way, taking the form of an obscured joke continuingly peppered throughout various episodes-Chekhov’s hive? While The Witchfinder isn’t always a thigh-slapping comedy rather than a mirthless chuckle, it’s an incredibly entertaining and memorable cart ride. Currently available to watch on BBC iPlayer, it is a reminder that even in the pre-information age there were periods that thought themselves the highest point of human intellect, and despite thinking that of ourselves in this moment it’s funny how the same ignorance still prevails.