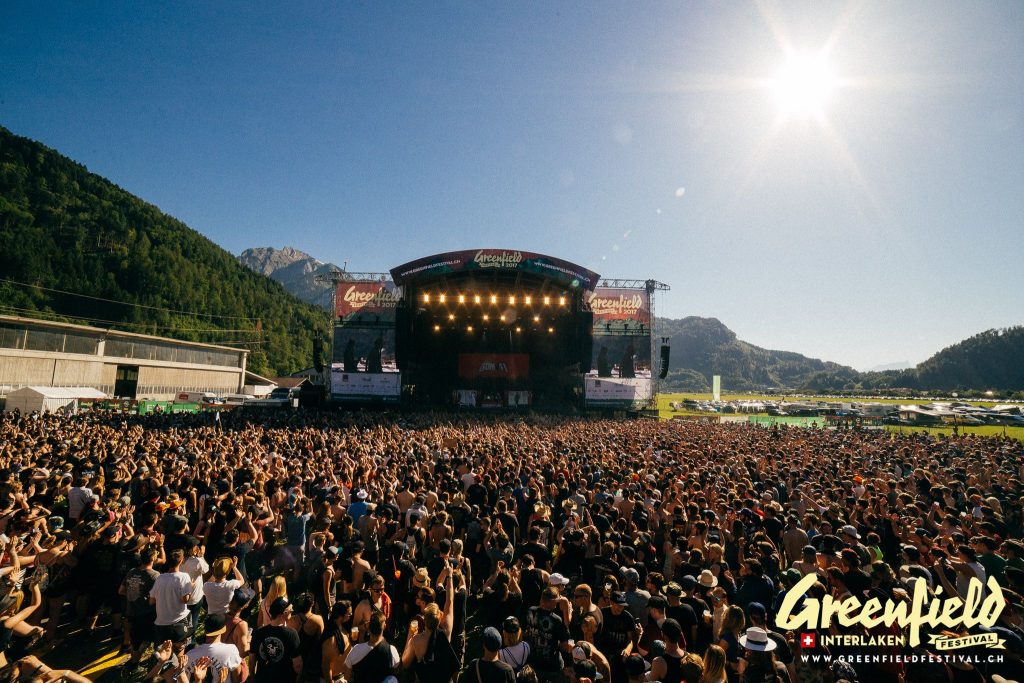 Greenfield festival was back in full swing for the first time since 2019, as the pandemic put a halt to the much-loved event. However, it was all on go in Interlaken, where the festival took place, and I was lucky enough to be part of the reanimation.

I flew out on June 8th to experience the festival, alongside my online best friend of 3 years; we got to meet for the first time and create memories that I’ll never forget. The festival began on June 9th and came to an end on June 11th. The weather managed to stay pleasant, the sun enhancing the breathtaking scenery. After successfully finding a spot to pitch our tent, the entertainment could truly begin.

The timetable was packed full of a line-up bound for a wall of death, mosh pits and erratic headbanging.

Electric Callboy is an electronic rock band formed of six members, who often wear funky wigs on stage. They have a more laid back stance when it comes to rock but still pack a punch. Their set, just shy of an hour, was short and sweet, but filled with bundles of fun and an explosion of colour.

As soon as Powerwolf stepped out on stage an atmosphere was created, from their outfits and facepaint, to the band’s stage flag.

This is a band that lives up to their name, bringing the power and energy most definitely. They are a power metal band who sing about ancient Roman legends along with Christianity.

Referring to their fanbase as Wolves, their distinctive sound gets the crowd pumped and clapping. During their hour-long set, one of the songs they performed was ‘Resurrection by Erection’. I must say it was pretty hysterical hearing everyone singing such a song.

Korn is a nu-metal band that pushes the boundaries and has had a successful career selling over 40 million records worldwide. Raising a fandom they refer to as freaks, the band is formed of five members:

The anticipation had been growing within me all day to see Korn closing the first night of the festival, and it certainly was worth it. As I walked towards the main stage, I could feel the beat of the drums coursing through my veins, with a bounce in my walk and my head nodding along.

Korn kicked off their set with ‘Falling Away From Me’, a song they released in 1999, from their album Issues. Their two-hour set was filled with unpredictable entertainment and a strong shot of energy. The band’s singer Jonathan Davis came out and played the bagpipes, much to the crowd’s confusion but delight.

Before I knew it their set was drawing to a close, the stage barely lit and no band members in sight. “It’s already over? That was quick.” I expressed to my friend before we began to walk away, looking back hoping they would return… much to my satisfaction they did. They performed an encore of a few songs, one of those being ‘A.D.I.D.A.S’. Definitely not a song about trainers, but rather about being intimate all day long.

If you have never heard Korn’s music it can be an acquired taste to begin with, but one thing for sure is that they put on a great show.

Heaven Shall Burn is one of Germany’s biggest metalcore bands, they headlined Greenfield Festival previously five years ago.

Heaven definitely would be burning with the heat that came off the stage. The sun was beaming down upon me, and flames were lighting up the stage. I felt like a potato roasting on a Sunday afternoon, in the best way possible.

An emotional set, Jinjer comes from the Ukraine, a country currently being ripped apart by war. The lead vocalist Tatiana Shmailyuk spoke emotionally about how they want their country back and how war is a disease. They may not have been performing on the main stage, but they had a clear impact. Jinjer, in my eyes, outdid the headlining band in terms of the power and energy. No disrespect to the headlining band.

Bury Tomorrow are a metalcore band from Southampton, England, who have graced the stage of Greenfield Festival before. Their music has a great balance of growls, fast paced guitar riffs and distinctive melodies.

Daniel Winter-Bates, who is the lead vocalist, gave a speech about how long it had been since being able to tour. Due to Covid-19 a halt was put to being able to come together and be united by music. It felt refreshing to watch them performing and a pleasure to let loose. Oh… and a bonus, I managed to make it to the barrier and catch the drumstick!

This was my fourth time getting to see Bring Me The Horizon live, all in all this night is what I’d been most excited for. I may be biased as undeniably they are my no.1 band. However, there’s no denying they put on an incredible show. If my anticipation wasn’t already strong, they added to the tension by coming out 10 minutes late. I think it’s fair to say they are highly respected and their success supports this.

They opened their set with one of their most popular songs ‘Can You Feel My Heart’ from the album ‘Sempiternal’. You’ll have to excuse me screaming my lungs out, but I did say they are my no.1 band… I wasn’t kidding.

The emotions that took over my body as I managed to make it through the crowd to the barrier. I was in a state of pure happiness and consumed by the lyrics. Much to the crowd’s delight, lead vocalist Oli Sykes jumped down from the stage.

“Get down here, come and give me some skin. Don’t be shy, I got high five tattooed on my hand just for you guys, so get up here.”

He encouraged the crowd to make their way to the barrier as they performed ‘Drown’. It is a moment that will stay with me for a long time, reaching out over the barrier to be high fived. My heart was filled, and I felt such joy being surrounded by others also there to be touched by music.

My heart was filled, and I felt such joy being surrounded by others also there to be touched by music.

Billy Talent emerged back in 2003 with a self-titled album and since then have continued to rise in the alternative music scene. They rounded off the festival with an explosion of noise and passion. It was a great end to a festival filled with emotions and music that filled my soul. Furthermore, it was beautiful to be beside my friend, arms around each other, as it came to a close.

Here’s to Greenfield 2022, let’s see what next year brings! Hopefully by then my back would have recovered from moshing and my neck from aggressively headbanging.