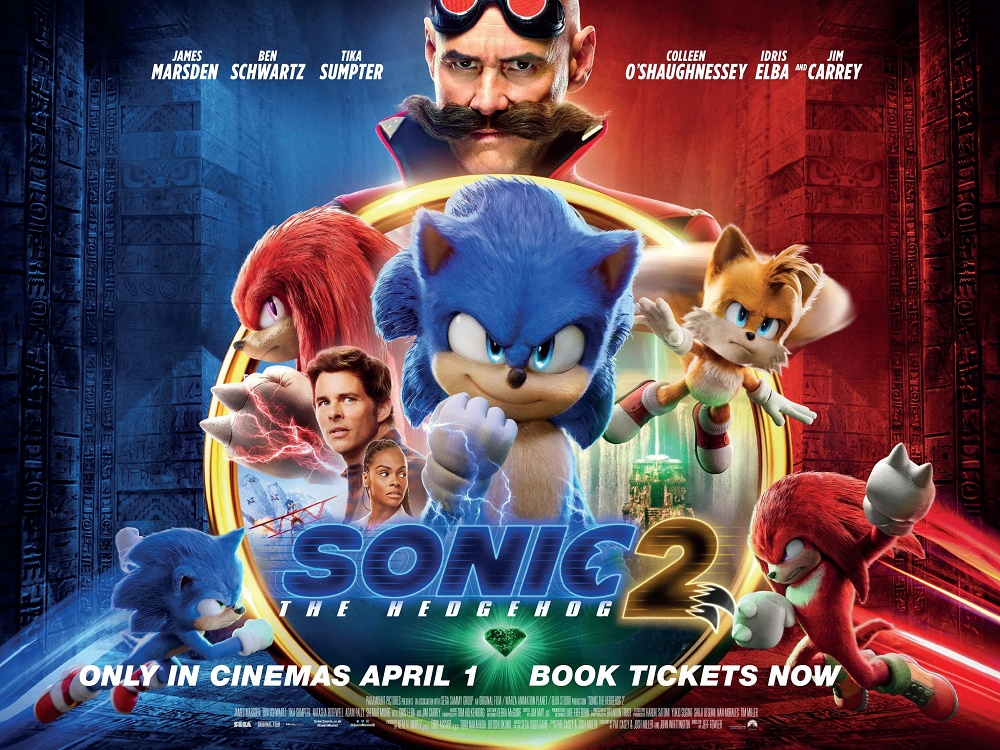 After the great success of the first film in the franchise, the second justly had a bit more expectation. The first flick was true to the source material for the most part, but the little they changed felt like a welcomed change. For example, Sonic having a human family and Dr Eggman being way more wacky than he ever was in the games. But I feel these changes add to the overall product and are a welcome change to the Sonic formula. The first film also set the tone and bar of quality for any subsequent movie, so does the sequel live up to the potential set up from the first film?

What I liked about the film

Generally, the whole movie is an action-packed adventure from start to finish, with great action and set pieces to really make the most of the characters and their abilities. They also chose to keep their appearances as close to the games as possible and it worked out great. Sonic, Tails, and Knuckles all look great and acted as they should, which really pleased me as a long-time fan of the series, it also almost brought a tear to my eye seeing these characters on the big screen.

The overall pacing of the film is great, which really sucks you in and keeps you engaged for the whole 2 hour run time. My first time viewing the film, the time flew by and was finished before I knew it. The pacing and structure really helped with this because there was hardly any spare time in the film, most of it was used for a reason to push the narrative forward. I was surprised with how well they had done this because recently, most of the adult films and shows I have been watching have struggled with pacing and either waste time or move too quickly. Which makes it even better that a licensed kid’s film about a video game mascot had done it right.

Jim Carrey again showed what he was made of, giving an amazing performance as Dr Robotnik, as I alluded to earlier in the games while being weird and wacky at times. In the games Eggman never really showed an insane amount of personality, whereas in the movies, especially the sequel, Jim Carrey got to go wild. Dialling the wackiness up to 100, which helped give this incarnation of the character something to make him stand out. I love the Eggman from the games, but I would be lying if this version isn’t up there too. It’s so different to what we’ve seen before but feels so right and seems to fit perfectly, proving you don’t always have to be 100% true to the source material. Also, he is not fat in the films while being a very rounded individual in the games.

A great upside to the film is that it is a true 2-hour feel-good film. While I, and I imagine many lifelong fans got emotional at certain points, it was not because the film intended to be emotional, it was just something about seeing all of Team Sonic on the big screen that just hit me in the feels. I remember playing Sonic Heroes all day when I was young, and to now see these characters I grew up adoring and playing non-stop, really struck a chord deep in me. Yes, it made me emotional, but in a good way. The film also has great messages for the children who watch it. Tails learns that it is ok to be weird and understands even though you are weird or different, people will still love and be there for you. Which I thought is a great message specially to give children. Most kids’ films try to force or shoehorn messages like this into their films to varying levels of success. But most do end up feeling forced whereas here it feels genuine and comes at a natural time. Which is a praise to the writing and scripting of the show, it really feels natural and believable for the most part.

What criticisms I have, if any

To be frank, I do not really have a bad word to say about this film, but that may be due to my bias. Unfortunately, I cannot see these films not in the eyes of a long-time Sonic fan, which will make me somewhat biased to the product. But if it was bad, I would be harsh and very cynical with my criticisms, but because it was a great film, I’m going to be more lenient with it than maybe a normal moviegoer would. With that being said, if I had to have a criticism it would be the wedding scene and the sister in general. It has its place in the story and did help to move the overall narrative along, but after watching it twice it was the only part in the whole film that felt even the slightest bit uninteresting. It does not take away from the film in any way and if you are watching for the first time, it won’t be a problem at all. Also, at first I did not like any of the humans apart from Eggman, but after watching it again I didn’t tend to mind them as much.

The dance battle scene I feel was a great scene and was great fun to watch. They even found a chance to sneak in a reference to one of my favourite games of all time, Sonic Adventure. During the dance battle, Tails throws Sonic into the air, and while up there he spins and pulls the pose from the cover art of Sonic Adventure. While I haven’t confirmed anywhere that this was intentional, I have no question in my head that it is. It is the exact same pose, and the film has plenty of other easter eggs and nods to the games, but when I saw this, I couldn’t stop smiling.

The film overall is very reminiscent of a Sonic game, Knuckles is tricked by Eggman like usual in the games which was nice to see happen again, and when Knuckles eventually joins Sonic it was very similar to how the team worked in Sonic Heroes. Another favourite of my childhood, and again gave me a grin from ear to ear when I saw them all team up. It’s especially similar to the game when they are fighting Eggman at the end, where they must all work together and use their unique abilities together to take down the evil doctor. This had me feeling insanely nostalgic and just made me feel sad but happy while watching.

The master emerald and the 7 chaos emeralds also made their big screen debut; being the source of conflict in most Sonic media, it was great to see them make an appearance here and when the chaos emeralds appeared, I knew what was coming next. When it all looked doom and gloom, the chaos emeralds combined with Sonic and transformed him into Super Sonic for the first time in the movie universe. It was a great moment to see as a Sonic fan and was truly a spectacle. The CGI was great in the film and especially during the last fight, which just added to the feeling of immersion while watching.

While the film is wrapping up, there is a sneaky but amazing post credit scene. After the final battle and among the rubble, the GUN commander is warned of a secret 50-year-old experiment just being unearthed. It’s named Project Shadow, and while we’re being told, we even got a look at the one and only Shadow the Hedgehog. When I saw this, I lost my mind because even though he was bound to show up eventually, I didn’t think he’d be in this at all, so it was a great surprise. The way that they set it up as well was great at making him look like a real threat, probably gearing him to be the 3rd film’s antagonist. I am so glad about how they did this and cannot wait for the 3rd instalment.

To me, this film and the previous entry are outstanding and not just great Sonic flicks, but great films in general. They appeal to children and adults alike while also scratching that itch of the Sonic fanbase, which overall lead to a film that anyone of any age can enjoy. I recommend this to anyone who’s looking for a feel-good fun ride from start to finish, or if you have children to entertain or if you love the characters on show. It really has something for everyone, and the future of this series is extremely bright after 2 great entries in the franchise. I hope we get plenty more films with loads more character’s integral to the games showing up, and hopefully we will get it.