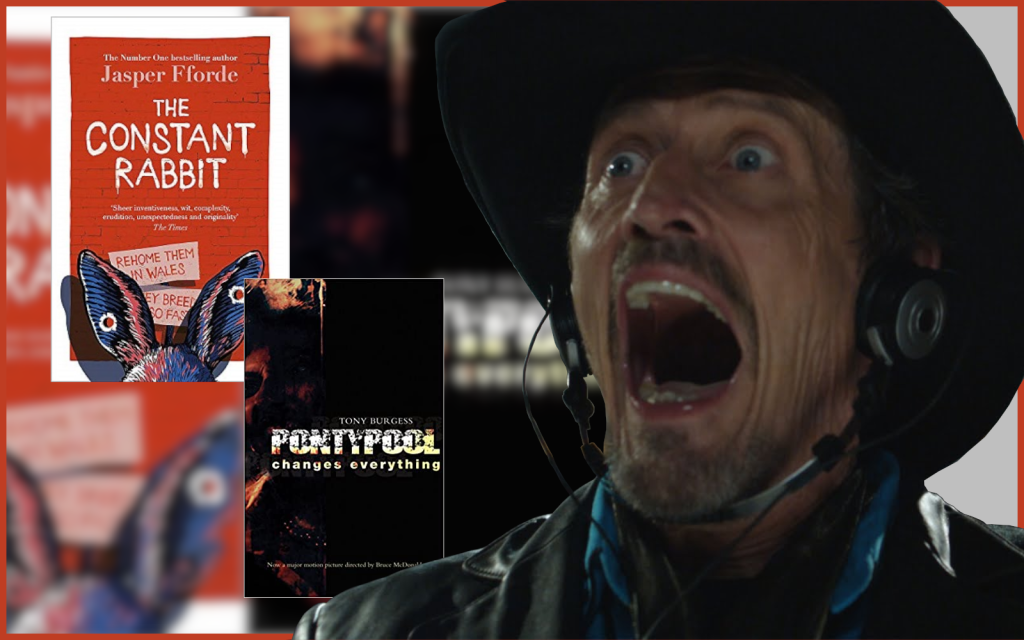 One of my favourite horror films is Pontypool (2008). Directed by Bruce McDonald, it stars Stephen McHattie as washed-up Canadian radio personality Grant Mazzy starting a new job in the backwater town of Pontypool, Ontario at the same time a strange virus emerges. Ostensibly a zombie movie, Pontypool’s plague is transferred through ‘infected’ words, which then drives people into a violent and cannibalistic rage. Taking place wholly in a soundproof studio, with much of the action heard through call-ins, the narrative is perfectly engineered for the set-up. Grant’s wish of something interesting happening comes true in a way he did not expect. His sole weapon, his voice, is no longer as useful as it once was. With great performances and sound design, the movie is an experience that remains tense and unique over a decade later; a sequel is currently in production.

Having fallen in love with this weird Canadian horror movie, I was clamouring for more like it. The film is based on a book, 1995’s Pontypool Changes Everything, written by Tony Burgess – who also wrote the screenplay. Fascinated by the concept and interested to see how it would be explored by the same writer, in a completely different medium, I tracked down a copy of this decades-old novel. Pontypool Changes Everything was not the book I thought it would be. It had neither the ingenuity nor the heart of the film it inspired. It is, instead, a patchwork of dour, gross, and needlessly cynical short stories set during the outbreak of the virus. In the afterword for the second edition, Burgess writes “I have asked you to read [this book], and now, sitting here at the end, I am telling you that it might be a mistake that you did.”

The book features (if by name only) several characters who appear in the film. Among them is Grant Mazzy, the protagonist of the movie, but the renegade charisma which makes him such a lovable hero is completely absent. Instead, he’s a foul-mouthed man who abuses his power and says things like “I think f*ckin’ a fella is sometimes about the most heterosexual thing a young man can do.” Another character transposed into the movie is Dr. Mendez but, instead of the wide-eyed mania he possesses in the film, Burgess feels it more important to have the character note “a teenage girl with long raven hair”, whose eyes are “a beautiful green fire”, and who is currently wearing a training bra. No, I’m not entirely sure how any of this is pertinent to the zombie virus either.

For a long time, I was deeply affronted by everything Pontypool Changes Everything stood for. It’s needless cruelty and pessimism was redolent of a bad Stephen King novel. Nothing I liked about the movie was there; it’s a bad book which deigns to tell, at length, the story of two siblings who engage in an incestuous relationship. It’s not artful. It’s not even relevant. I have only very recently been able to forgive it. In the afterword, Burgess refuses to “apologise” for the terrible book he charged people money for. Which is absolutely fine, because his script for Pontypool – which excised everything aside from the core concept – was apology enough. I gained a deeper level of understanding for a film I already loved, and a begrudging respect for its writer, all because I hated his terrible, terrible book.

A book which I doubt I’ll ever learn to respect is Jasper Fforde’s The Constant Rabbit. Published in 2020, it tells the story of Peter Knox, a civil servant for an authoritarian government set in a world in which an ‘Anthropomorphising Event’ turned certain animals, predominantly rabbits and foxes, into humanoids. Both in-universe characters and real-world critics call this Event allegorical or “satirical”. The rabbits, as the most populous (because they breed like rabbits, it’s almost a joke), are heavily segregated and discriminated against. One anonymous reader, quoted by the book, calls it “the Animal Farm that 2020 needed!”, and the Financial Times wrote that it shows “merely holding liberal values is not enough”.

Perhaps these pithy quotes would be earned if they accurately described the book. To use the phrase ‘mixes its metaphors’ doesn’t do justice as to how confused the novel is by itself. At a first glance, the book is about xenophobia and Islamophobia. The rabbits have formed their own religion, they’re all vegan, and are total pacifists. These humanoid animals are grouped as single monolithic conglomerates throughout the novel, with no diverging beliefs or behaviours in the way that real groups of people do. The rabbits are wholly forgiving to everyone, even Peter – the man actively working against them with the government. The characters who represent this fictional racism are shown to be liars and thugs regardless, and no consideration is given to the fact that discrimination is often founded on the prejudices held by ‘normal people’. The Constant Rabbit, rather than making an explicit stand for or against anything, is predominantly concerned with easing the misplaced guilt that privileged ‘normal people’ tend to feel when faced with the knowledge that they are benefiting from an unjust system.

It’s an abysmal book that I keep on my bookshelf solely to remind myself that literally anyone can get a book deal. The Constant Rabbit did, however, help me understand that ‘fictional prejudice’ is a terrible trope used predominantly by people who haven’t faced prejudice. To write about people, who are treated as outsiders, as literal outsiders to humanity – be they aliens, monsters, or talking rabbits – is not the biting satire that straight, white, and middle-class writers such as Fforde think it is. The book is concurrently self-abasing and self-congratulatory. At the climax, where the themes of ‘discrimination’ and ‘prejudice’ should realistically come to ahead, the rabbits simply decide to turn back into rabbits. There’s no reckoning for the government, nor for the complacent protagonist, and it ultimately amounts to saying, ‘be nice to immigrants, even though hopefully they’ll all go home one day’.

James Greig, when writing about Richard Osman’s recent ‘cozy crime’ novels, said “it’s not snobbish to expect that popular fiction should be good… and have something to say about the world”. Whilst he was writing about a different series of books, Greig’s criticism is highly applicable to The Constant Rabbit; “the last thing we need is a flattering mirror which tells us that deep down we are jolly nice, except for the people who are scum, and that our most prosaic habits — drinking tea, eating biscuits — are endlessly charming.” Novels such as The Constant Rabbit, or The Thursday Murder Club, are fascinating only because they offer a window into unconscious ways of looking at the world. Writing is inherently revealing, and through bad books, we can learn about people too self-satisfied or self-glorifying to realise exactly what they’re showing us.