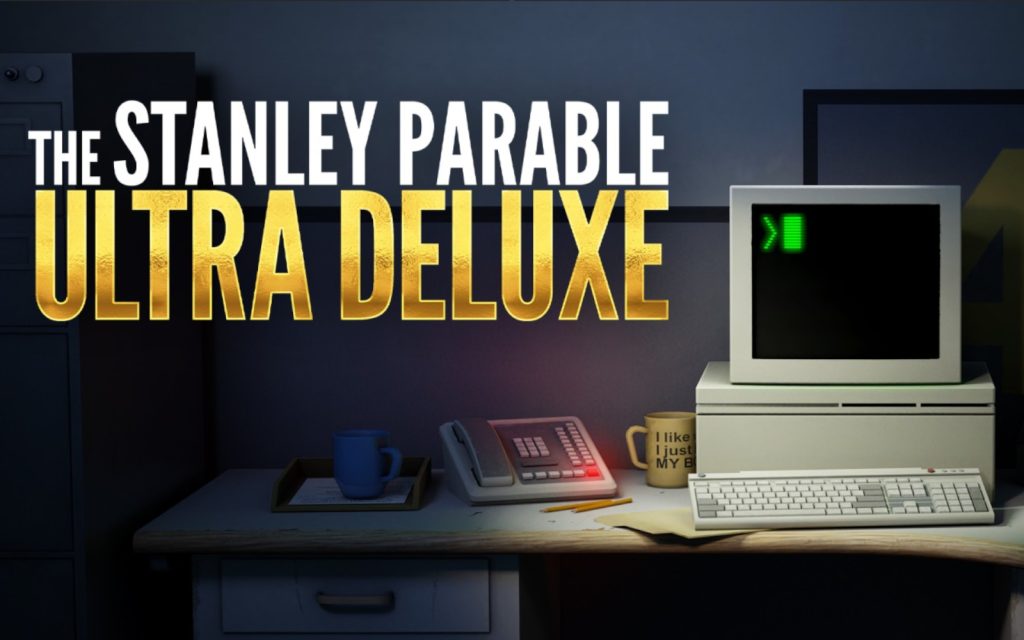 2013’s The Stanley Parable, originally a Half-Life 2 mod, ‘told’ the ‘story’ of ‘Stanley’. Diverging down multiple paths and never really restarting from the beginning, Stanley moves through his office building under the control of the player towards an ending. They are aided by The Narrator (Kevan Brighting), who tells Stanley what he should do next in the story chronology. The player has ‘the choice’ of following or ignoring the narration, and The Narrator will respond and adjust the story accordingly.

It took the internet by storm upon release, with its self-aware humour and even more self-aware commentary on the nature of choice in video games; you don’t really have choice, even in a game that sells itself on having choice. The game knows at what points you can follow or ignore The Narrator. All of the choices and paths were created in advance. Just as a novel or movie, you are still under the thumb of the writer. Still following the urges of gameplay. Released by Galactic Café, The Stanley Parable’s success as an ‘indie art game’ was relatively unheard of back in 2013. In 2015, writer William Pugh set up Crows Crows Crows and in 2022, they released The Stanley Parable: Ultra Deluxe, an expansion/sequel to the original.

A lot happened between 2013 and 2022. Within the gaming industry during that time, the philosophy of ‘games as service’ took hold. Pay to Win, Always Online, and the constant dropping of “new content” became the standard models for mainstream video game release. Now, a game on launch is often drastically different (and more expensive) by the time the sequel is announced. Development never really stops, and the intended artistic experience is harder to pinpoint as a result. Political developments impacted the games industry similarly to how they impacted the rest of culture – the reactionary dog whistling of GamerGate aided in the radicalisation of ‘gamers’, and further entrenched their belief that games as an artform belong to them. On a much deeper level, in 2022 it’s harder not to question the futility of making art in a world that’s barrelling towards the edge of a cliff. The Stanley Parable: Ultra Deluxe released into a drastically different world than the original.

Whilst the original had none, Ultra Deluxe has a throughline that is well aware of these changes. You enter the expansion through a door in the base game now unsubtly signposted as “NEW CONTENT”. It announces The Stanley Parable 2, now featuring jumping mechanics! The Narrator isn’t too pleased with this new content, and eventually leads Stanley towards the Memory Zone, a collection of nostalgic references to the original game, along with awards it received. Then, he finds an industrial site filled with negative Steam reviews – why can’t you fast-forward the narrator? He’s so boring to listen to.

The Narrator invents his own content, including a room with a fast forward button. The only thing you can do is press it to skip past the dialogue, jumping forward in increasingly longer intervals. First, The Narrator is pleased to see you after being gone a week. Then, he’s ranting to himself about the philistines who didn’t understand his game. After that he’s despondent. Then he’s gone. Another skip, and there’s only the sounds of storms and chaos outside the room. An opening appears with a few more skips. Outside, you’re in an expansive desert. How far have you jumped now? The game ‘resets’ after a few moments in the heat of this new world. It was as though the game had skipped from 2013 to 2022, and even the vast expanse of loot crates and NEW CONTENT had given way to a quiet interval of sun-bleached sand. This is one of the first new ‘endings’ to be found in Ultra Deluxe, and there were plenty more – but this one stuck with me all the way. 2022 is a scarier time to be alive than a decade ago.

Another major throughline is a bucket. Officially The Stanley Parable Reassurance Bucket, this NEW CONTENT from The Narrator finds its way into the base game and drastically changes many of the endings. It’s consciously uncanny seeing familiar moments changed, purely through the addition of a bucket. Along with an utterly pointless collectibles sub-quest, the bucket is a commentary on the modern obsession with ‘stuff’. In-game items that the player is expected or required to constantly collect have become a staple of ‘games as service’, from Grand Theft Auto Online to Fallout 76, with the clear aim of creating constant loops of gameplay which brings players coming back to scratch some ancient hunter-gatherer itch. Here, that itch is shown as straightforwardly obsessive.

The bucket is constantly spoken about as holding dark powers, and is frequently the object of Stanley’s (and The Narrator’s) obsession. Once you hold the bucket, you don’t want to let go. You would rather place the bucket, and not yourself, in an escape pod. You will fall in love with the bucket and have it as the only thing in Stanley’s sad life. It’s all about the bucket in The Stanley Parable 2: Ultra Deluxe. In one ending, The Narrator holds an intervention for Stanley, gathering ‘iconic characters’ from the original such as a mannequin, in a vain attempt for Stanley to give up the bucket. The player is given a chance to destroy the bucket, but it only plays an animation whereby Stanley clutches it tighter to his chest. It’s a bucket. It’s worthless, aside from unlocking the NEW CONTENT. The same NEW CONTENT which is almost wholly created around the bucket. Bucket is love, bucket is life.

Once all the collectibles have been discovered, similar in design to POP! Vinyls or any other licensed tie-in tat, The Narrator tracks Stanley back through the imagery of The Stanley Parable 2, and then the iconic moments of the original game. “Before everything else,” he says nostalgically, “there was your office”. He recalls before the story even started, when he was introducing the set-up to first time players. He was different back then; he was more proactive. He made his own decisions, before the player made them for him. The Stanley Parable: Ultra Deluxe is a game about itself, and it hates that. The Narrator, and the creators, want to think for themselves again. The Stanley Parable 2 was an in-game soulless sequel and, whilst it has more to say for itself, Ultra Deluxe knows that it is the same. Remove the in-jokes, the Stanley figurine collectibles, and the bucket, and it’s the same game that remains sorely outdated in 2022.

I had a great time with The Stanley Parable: Ultra Deluxe. It’s buckets of fun being Stanley again. Just like The Narrator, “I did enjoy telling his story. So very much.” It knows, though, that there aren’t many reasons to keep playing. Finding all the new endings I didn’t get around to? What would be the point? I did them once, in 2013. The bucket is still just an object that exists to make you play the game over and over. It’s not enough to be meta any longer. We don’t need more tongue-in-cheek references to how weirdly constructed and referential our stories are. We need better ones. We need new stories, and by some cruel twist of fate, it took a retelling of an old story to make that point.