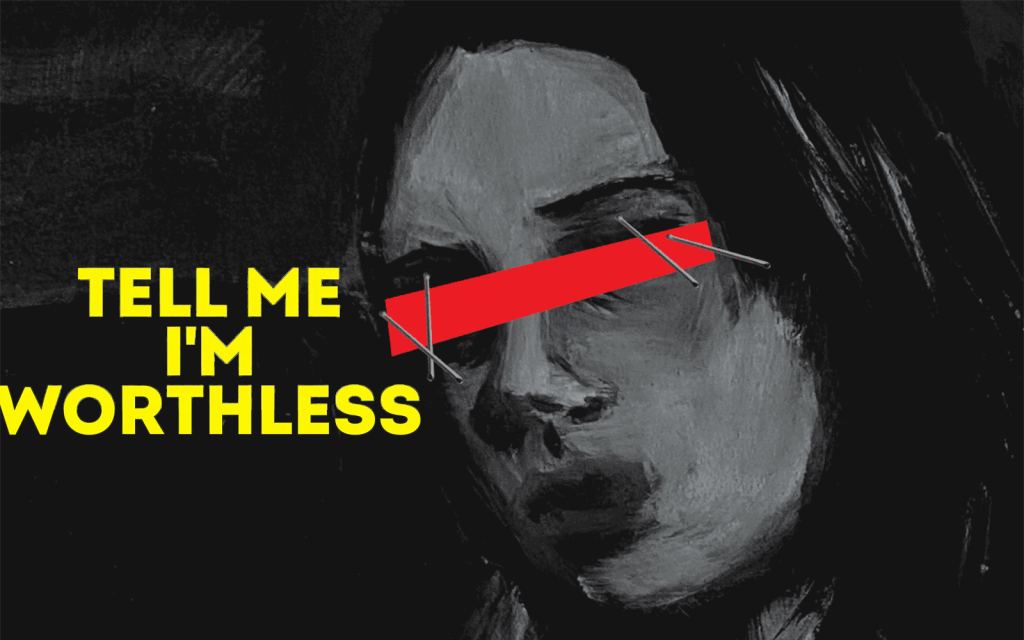 If you research Tell Me I’m Worthless then you’ll come across the expression “cutting, disruptive, and darkly funny” more than once. You’ll find this on the publisher’s website, you’ll find this on the Amazon page, you’ll find this on the back of the book itself. You’ll see the book described as queer fiction, as queer horror, as a modern queer Gothic horror novel. You’ll read about its portrayal of trans life, its critique of the TERF movement, of its representation of racism, homophobia and transphobia, of misogyny and xenophobia all as ghosts of the British Empire. All of this is true – but they’re also all very flat and uninspiring ways to describe Tell Me I’m Worthless.

Tell Me I’m Worthless is a 2021 novel by Alison Rumfitt, and it’s borderline indescribable. It’s all of those things, but it can’t be pinned down by them. It’s a love story, it’s a story about rape and vitriolic hate-fuelled sex. It’s about being trans in modern England, it’s about a haunted Victorian house. It’s a tale of queer empowerment, it’s a tale of queer destruction. It breaks form and perspective in ways that are at once imperceptible and fascinating. It’s the story of Alice, a transwoman, and Ila, her transphobic ex-girlfriend. It’s the story of Hannah, their friend, a symbol of white femininity, a living corpse bent into the shape of a swastika.

Alice, who pays her way making niche pornography, is haunted by the fascistic ghost of Albion, an old derelict house whose influence runs right into the heart of Westminster. Ila, a brown Jewish woman, is also haunted by it – but she displaces her trauma onto Alice, and is now an up-and-coming figure in the academic TERF movement, “as a therapy”. The House simultaneously repels and compels people. The foreman of a group of builders, who were attempting to tear down the House, was compelled to racially attack his co-workers and shut down the project. In that house, three years ago, their friend Hannah was taken and twisted into a swastika by Albion, forced to watch as two separate realities occurred – either Alice raped Ila, and carved Nazi slogans into her skin, or Ila raped Alice, and carved a vagina onto her forehead. Both of them carry the scars, despite disagreeing over which reality occurred.

In Italy, a huge painting named “The Apotheosis of Fascism” still stands. When Italy was making a bid for the 2024 Olympics in 2014, their Prime Minister stood in front of that very painting. It depicts Mussolini as a God. You can go to it, on your next holiday, and you can kneel down at its feet, and you can pray.

Rumfitt has previously published The T(y)ranny, a poetic deconstruction of the works of Margaret Atwood – but Tell Me I’m Worthless is strikingly similar to Atwood’s The Handmaid’s Tale (1985). Both are misrepresented as stories of ongoing empowerment. A quick glance at the Hulu adaptation shows this misrepresentation, because where Bruce Miller’s dystopian thriller series diverges from the novel is in scope. Miller gives Offred a real name, whereas Atwood does not. Miller gives Offred chances at freedom in a coherent narrative, whereas Atwood does not. The Handmaid’s Tale, which is often critiqued by trans people for its reductive view of gender, is as much a story of women’s empowerment as Tell Me I’m Worthless – which is only “cutting and disruptive” if it’s assumed that Rumfitt cares to empower herself and others through her work. Alice is continuously dehumanised, her body and being made spectacle by the prose; “I extract myself from Sabi’s arms and walk across the room, naked, trying not to think about what my weird, pale, flabby naked body looks like while I move”.

How we tend to qualify something as queer fiction, be that representation or empowerment, from Heartstopper (2022-) to Queer as Folk (1999-2000), is that there is a moral standpoint that queerness and transness are normal and okay. This is, for a lot of people, undeniable – but that simplistic standpoint is moot in a world where gay men were allowed to die of AIDS and trans people commit suicide whilst on GIC waiting lists as transphobes debate their right to exist online. That standpoint is still up for debate – and Albion, the ghost of the British Empire, is more than happy to get involved. Tell Me I’m Worthless is comfortable in telling you the uncomfortable truth that freedom is never assured.

I am so much more than you will ever be. I can do so much more. I am the terror at the heart of this country, and I can tell this country what to do. I have been built new from the blood and guts of endless sin and now I sit upon this pile of misshapen skulls and I laugh at my newfound land.

Whilst it would be crass to suggest that Rumfitt is making a ‘both sides’ argument, the two distinct realities that occurred in the heart of the House show that ‘both sides’ of ‘the trans debate’ are wholly real to the people involved. Reality is only what your biases and beliefs allow it to be – the novel ends with a dystopic portrayal of Britain under Albion’s influence, in which the crime of “being a murderer… is second to being a gay fag”. The epilogue, however, describes a future Pride parade – which is bombed by a radicalised young man, who lives in the tower block where Albion used to stand. Could these both be the same future, or diverging paths?

These contradictory realities are also found in the book’s genre. Is it a Gothic tale about a haunted house, or the story of a burgeoning dystopian horror? It’s both, because Albion itself can only ever be a metaphor. What do haunted houses want? Bly Manor, the Blair Witch house, any mansion visited by Scooby-Doo – are they greedy? Do they want revenge? We personify the place but, more often than not, it’s a human soul with a want or need that haunts them. The House in Tell Me I’m Worthless is personified in the same way, but its lack of personhood makes it into an ideological haunting.

It’s clear from page one that the House isn’t physical, and that the living soul inside of it is metaphysical. For something meant to be wholly inhuman, Albion holds uncomfortably human wants and needs – its insides are covered in racist and sexist graffiti, it dreams of the blood of profligates rushing over the white cliffs of Dover, of Enoch Powell on the radio. It thrives in the latent bigotry within all the people who live in a world built by empire. The House didn’t create these ideas, nor is it brought into being by their power. It’s an ouroboros. Homophobia and transphobia don’t come from any place in particular, and no amount of activism or reform or revolution will wipe them out. They will be here as long as queer people are here – and queer people aren’t going anywhere. Albion can only win if there’s a Pride parade to bomb, and Albion can only lose if there’s a Pride parade to bomb; “for someone to be comfortable, another has to be uncomfortable. For someone to feel safe, another has to be unsafe”.

You want to be okay. Think of it as a therapy. Think of it as radical… There is a storm coming that will swallow this country whole and all the filth within it will be drowned and washed down over the white cliffs…

Tell Me I’m Worthless is not the tale of queer deliverance that some would make it out to be. It’s the story of ongoing, desperate survival against forces that are simultaneously inhuman and all too human. Albion could burn to the ground, but the blood and bones of the Empire are still hidden in the walls of Downing Street, still buried under tower blocks and car parks. If the goal of a haunted house story is to escape, then Alice succeeds as protagonist. But, just as how there’s always a face under the mask in Scooby-Doo, there’s always something that will haunt her. It isn’t greed, or revenge, or anger that haunts her – it’s the knowledge that liberation isn’t forever.

Tell Me I’m Worthless can be purchased from Cipher Press here.