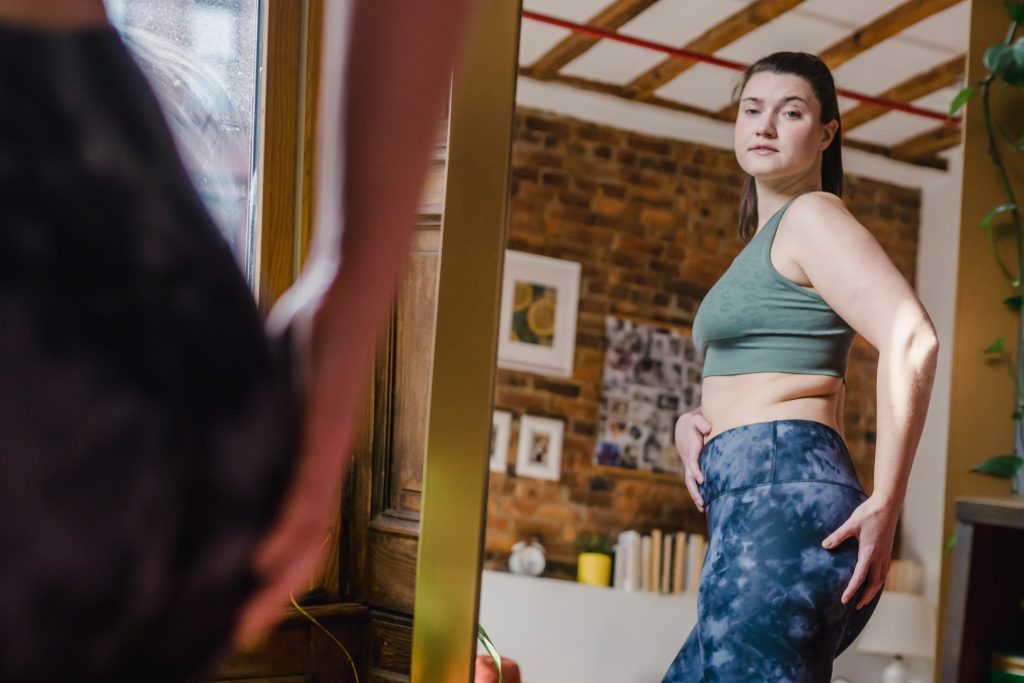 Remember when having a big butt used to be seen as a bad thing? “Oh my Gosh! Look at her butt.” Nowadays this sounds more like a compliment but in the early 2000s, not so much. It was a popular phrase to express one’s shock and horror at the size of someone’s butt.  The phrase was used in the intro of Sir Mix-a-Lot’s Baby Got Back and is used in the context of a white girl looking at a black girl’s butt. Nicki Minaj used this as a sample in one of her most successful tracks Anaconda which repopularised the phrase into a more positive one as big booties became popular.

Around the time of Anaconda’s release in 2014, the Body Positivity Movement was rising in popularity, which is a social movement focused on the acceptance of disabilities, skin conditions and most popularly known for, the acceptance of all body types. With this, curvier bodies started to gain more attention, a far cry from the Victoria’s Secret body that had been seen as the height of beauty for the last few years.

Whilst the body positivity movement was picking up steam, online fashion companies sought to capitalise off of it and started including varying body types in their marketing leaving other companies to be criticised. Between 2016 and 2018, Black American culture and Trap (Rap) started to become mainstream and it influenced pretty much all the fashion trends of this period. With the popularisation of rap came more exposure to the classic video vixen and black/Latin stripper culture which celebrated having a curvy hourglass figure. It was around this time as well that Kim Kardashian and her sister Kylie Jenner’s arses became the talk of pop culture, as most people were rightly convinced that they had had work done yet were still seemingly captivated by such bodies. All of this from online shopping adverts to music videos, Instagram influencers, black culture and Kim Kardashian made having a big booty, wide hips and a small waist the new beauty standard. The only problem was that it was an extremely rare body type. Now don’t get me wrong, I’m not saying people can’t have this figure naturally, there are quite a few black and Latin American women who naturally have this body type (though the amount that do is exaggerated), Doja Cat is a good example of a woman who I believe hasn’t had any work done to her body but has the ‘curvy hourglass’ look. You could also work out to achieve this, but you’ll likely only see a small change and wider hips is not something you can really gain muscle for. So, if you don’t have it naturally and you can’t achieve it through working out, there is of course plastic surgery like butt implants, injections or of course the infamous BBL.

What is a BBL?

BBL stands for Brazilian Butt Lift and it’s a cosmetic procedure where fat is taken from other parts of the body, usually the stomach by liposuction and is then injected into the butt and hip area. The areas of planned liposuction and the outline of planned fat grafting are marked before surgery. Once the patient is under anaesthesia, the liposuction is performed in the desired areas and the fat is collected and the live fat cells are separated from the liposuction fluid. That fat is then injected into the marked areas of the butt and hips depending on what type of shape the patient wants.

The cost of a BBL can vary depending on the doctor and location, but they typically cost $3,000 to $30,000. The ones around $3000 are usually done at ‘chop shops’ where patient frequency is high, these are usually a lot more dangerous than the more expensive ones. A BBL is considered to be one of the most dangerous and deathly cosmetic procedures with a mortality rate of 1 in 3000 (The American Society for Aesthetic Plastic Surgery, 2017). Whether it’s due to botched surgeries or the risk of getting a BBL in general (the fat can travel and block important blood vessels and arteries), doctors aren’t sure. Implants can also be dangerous as they can leak silicone or other non-natural material into the body if they burst. Despite the many risks, 40,320 buttock augmentations were performed in 2020 alone (Aesthetic Society).

Nowadays the term BBL or thicc is used to widely describe the body type where someone has a flat stomach, thin arms, wide hips and of course a big butt. This term is even used if the person has had implants or injections instead. And for the purpose of this article, I will be using it in a similar manner.

The End of the BBL Trend

Recently in online discussion, especially on the fashion side of the internet, the topic as to whether or not the BBL era is over peaked when Kim Kardashian had her butt significantly reduced. It’s also obvious that fashion trends lately have been favouring people with skinnier bodies. I think this shift is due to gen-z and millennial nostalgia for the early 2000s especially with the rise of Y2K fashion, the return of low-rise trousers and skinny models like Bella Hadid rising back to popularity.

There’s also another sphere of influence to explain this slow change. East Asian culture has been having an effect on our fashion and beauty trends a lot. Just like the rising popularity of black culture in the late 2010s that led to the black beauty standard being popularised (‘thick’ hourglass figure), I believe a similar thing is happening with East Asian culture with Anime, K-pop and Korean film/TV shows leading the charge. Beauty standards are likely to follow that take inspiration from East Asian culture, like skinnier bodies and the recent fox eye and e-girl eyeliner trends that aim to make the eyes appear more slanted and almond-shaped.

So even though BBL operations are at their highest, I do believe pop culture is shifting back to praising skinnier body types. Though it’s not a complete departure from the BBL body, as pop culture does not seem to be going right back to the early 2000s of having no butt and a more rectangular-shaped body. The new trend seems to be a smaller, slimmer version of the BBL body. Essentially a skinny hourglass where the waist is still way smaller than the hips and there is still some butt definition but without the fullness of the thicker body type. Longer legs seem to be a part of this trend too, which could also be East Asian influence as they also praise longer legs. People online are even calling it a ‘skinny BBL’, so rather than ending I think it’s safe to say that the BBL trend has simply evolved.

When writing this I simply wanted to record my thoughts on the interesting ways that beauty standards have been evolving over these past few years, spurred and sped up by social media. But I thought it important to note how harmful it is to see bodies as a ‘trend’. It is something humanity has done since we were able to depict the human body in an artistic form, but with the presence of the internet in our modern world the view of bodies as trendable and changeable, especially women’s bodies, has seemingly gotten worse. Your body is not a fashion statement, nor does it exist to please people’s eyes, it is a miracle of nature that we can walk, talk and feel the world through our bodies so make sure to take care of it, no matter what it looks like. Personally, I don’t subscribe to the body positivity movement, as I think it’s harmful to try and forcefully convince yourself that your body is beautiful and should be praised by society no matter what. There may be days where you feel insecure and there may be days where you feel like the most beautiful person in the world, and all these feelings are ok and natural. I think it’s much better to view your body as simply the vessel you have to move around the world in, which is why I much prefer the body neutrality movement instead. Whatever your body looks like you are deserving of respect, love, privacy and freedom to express yourself. If you think you may be suffering from severe body dysmorphia or an eating disorder, please contact your doctor or therapist as this is a serious issue that needs to be medically treated.