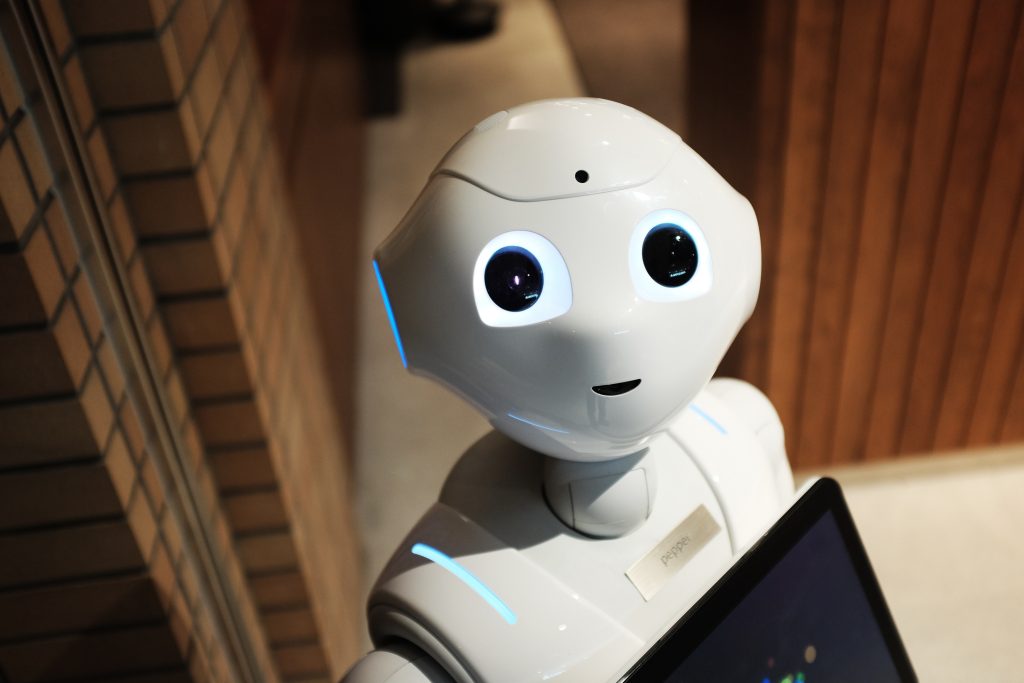 As a fan of classic science fiction, I’ve always been enamoured with the technology that writers of the genre have imagined. Without the need to make these devices actually function, the concepts invented to solve the problems within a sci-fi setting were only limited by what could be imagined. Necessity is the mother of invention, doubly so if that necessity is forwarding the plot! But as modern technology has been advancing faster than ever, I thought it’d be interesting to see how far into the imagined future technology has come!

Let’s begin with robots, a classic of science fiction! The idea of autonomous servants built to aid mankind; or destroy it in an ironic twist of fate; has been a staple of the genre since ancient times, albeit not always in the mechanical sense we think of now. But with advances in engineering and artificial intelligence, the modern world has its fair share of robots already! Ranging from small desk companions like ANKI’s Cosmo (pictured above), or the Kime robot developed by Macco Robotics in Spain, which is built into a kiosk to serve food and drinks to customers. With Industrial robots found in many factories already, and many robotics companies working on robotic assistants for medical care and education, it seems likely the future of robotics will only delve further into the realm of science fiction.

While modern robots seem unlikely to take over the world, it’s only a matter of time before we see C-3PO doing your nan’s shopping and taking her dog for a walk.

We may not always think about it, but Zoom is the screen calls of star trek’s bridge brought to your own desk! Many a story has invented ways for two characters to communicate over vast distances with the aid of machines and now we are spoilt for choice as to how we do it. Hell, the modern mobile phone itself is a marvel. Let’s not forget how revolutionary the idea of a mobile communication device once was.

Nowadays we probably all use Mobiles, but what you may not know is that Martin Cooper, the inventor of the first mobile, was directly inspired by star trek communicators! I too was sceptical on how direct the inspiration is; so I thought I’d let you click here for further proof of star trek’s influence on handheld devices.

Albeit not exactly the matrix, virtual reality headsets can at least allow our eyes to interact with a world separate from our own as though we were there. The headsets focal point moves with your eyeline to make you feel as if you were moving through a virtual space. With 360 cameras and modern programming you could probably put yourself anywhere!

We’re not at the point of entering a virtual space like Tron but to walk inside a world of code and look around? That’s something to behold, and a lot safer than the perilous jumps into cyberspace within science fiction.

In our current world, replacements for lost or missing limbs are artificially created. In modern day these are commonplace and isn’t it fantastic that that’s the case? Now whether it’s a limb cut off with a lightsabre by your evil father or the unfortunate result of a traffic accident, science can help those who are missing a limb live fuller lives. There’s something awe inspiring about seeing a Paralympic runner approaching speeds I could only dream of through the power of science and determination!

Yes, gone are the days in which items like Star Trek’s Replicator were merely an idea.

While an expensive tool at the moment, 3D printers are able to use liquid plastics or resin in order to print out objects you create on their software by hardening the material in specific ways as it flows. So far, for creating small plastic components from plastic car parts to 3d plastic miniatures, the commercial 3D printer has been a success.

With more specialist models used in the creation of implants and dental fixings etc. the 3d printer has a surprisingly large array of uses in the medical world. Imagine the day mankind can print an organ? The technology is well under way, with projects having begun back in 2009.

And that’s only the tip of the iceberg of what modern technology we have that used to lie entirely within the world of fiction!

I thought I’d top off this article by taking a look at some of the projects out there that aim to take us even further into the future we once only imagined! Like the light field lab and their work on realistic holograms:

And the working jet suit prototypes: who knows what the world would look like if these became financially viable? “Bye honey I’m off to work!” then take off, lifted into the air by a screaming jet of flame, careening to work at worrying speed for a low altitude flight, crashing into Greg’s to pick up something for your lunch.

And what about the Youtubers working on the technology to build a real lightsabre? Although technically these were from a long time ago in a galaxy far away.

Oh yeah, and COMMERCIAL SPACE TRAVEL! Forwarded by companies like SpaceX and Virgin Galactic, starting the long process of getting people like us into space!

Humanity has had the same dream for a while, to do cool stuff with science. And right now we are living in a golden age of information and it’s clear that human creativity is in full force, striving to bring our ideas of the future to life! Let us know what sci-fi tech you’re most excited for on Networthpick’s social media!